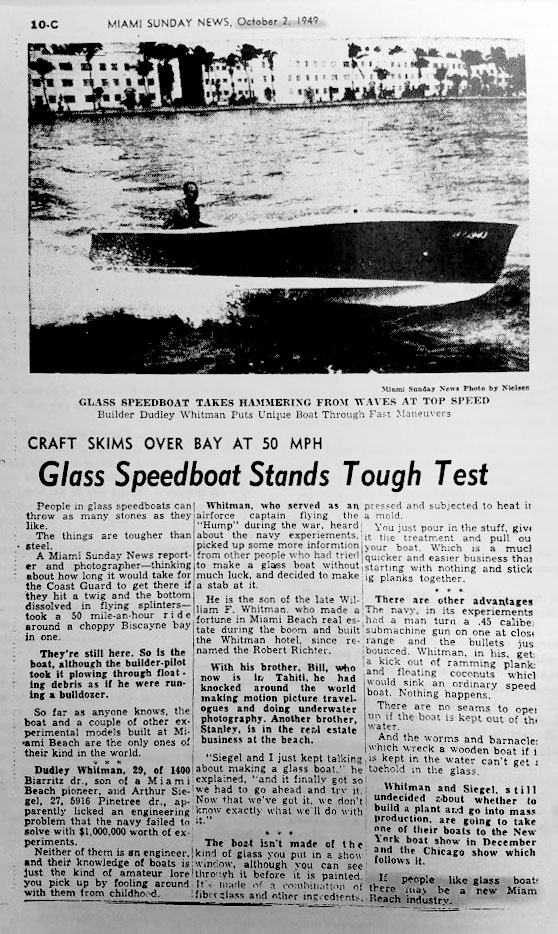 For the jillions of dollars that change hands in the pleasure boat industry daily, until the advent of the “Aerosurf, So you want to build a boat” computer program (or such), the boat biz has been more of a craft than a business. For the first thirty or so years of “plastic” boat building, say, from 1950 to 1980, one could just wake up in the morning and say “Ay, Carajo, penso me voy construir una barca!” “Oh, hell, I think I will build a boat”. This is a direct quote from Juan Q. Publico, Miami Boat builder. (Most Miami boat builders were Cuban). Until recently, standard pleasure boat laminates were well known public properties that required only that one purchase Brand Whatever materials, fiberglass and resin. The Company would recommend a laminate schedule, take your hand and show the process from start to finish. No one ever actually used that information, but it looked nice on the office wall.

Fiberglass boat building east of the Mississippi commenced in the late 1940’s, with Troy Wollard, Howard Abbey, Art Siegel and Dudley Whitman building an all-fiberglass 17’ runabout at Troy’s Miami Shores residence. There is a plaque there today, commemorating the event.

Having never built a fiberglass boat, and having no one to offer advice, it was sort of hit or miss to make a satisfactory boat on the first try. Troy and Howard were among the best of the wooden boat builders and designers, and each had played a big part in the war effort by working at Miami Shipbuilding, where they built lots of Navy type stuff. They repaired PT boats, and actually built Air Sea Rescue boats, about 63 feet long, triple planked, with big gasoline engines, used to save survivors of the many ships that were torpedoed along the coast. Now the war was over, and it was time to have some fun!

They chose a 17 foot wooden runabout. Similar to a Bunnell Sawyer runabout, to use for the male mold, or “plug”. They sanded the plug smooth, having removed the rubrails and propellers and such, everything that was an “outie” on the hull, to assure that the boat could be removed from the plug. The only components available for fiberglass construction at that time, 1947, were 10 ounce cloth (weave), polyester resin, cobalt (accelerator) and MEK peroxide, which catalyzed (reacted) with the cobalt to initiate an exothermic reaction. Whew.

They calculated the desired thickness of the fiberglass boat, about one half inch average, and stacked layer after layer of 10 oz. cloth, until the desired thickness of material was reached. Visualize the plug upside down in the garage, with the dry fiberglass material draped over it, and stapled in a few spots to hold its shape. Now to mix the resin, accelerator and catalyst. They made a small one quart sample of the resin, using the information supplied by the manufacturer. Unfortunately, the chart did not allow for “mass effect” for the resin (thick quantities harden much quicker than thin ones), and the fact that it is cooler at night than at four in the afternoon. They mixed the resin and manned the brushes and rollers to “wet out” the material.
The polyester resin odor was overwhelming in the garage, and nobody knew for sure if it would kill you or not, so they closed the door, and beat it.

They reconsidered their resin calculations, and got it right the second try. The boat was as hard as a rock, maybe harder, and as ugly as a mud fence, with the smooth side on the inside, and the backside of the rough stack of fiberglass on the outside of hull. They pulled the hull from the plug, and were quite satisfied with everything except the hundreds of hours facing them in finishing the outside hull surfaces. They ran through the list of friends “If you need any help on that project, I will be happy to help” in no time, and Castro had not yet sent a supply of Doctors, Bankers, Accountants and such to be masking taped and tortured. They ground, sanded, filled puttied, cussed, cried, and slowly turned the Ugly Duckling into a Swan.

After 70 years, the boat still exists. It is in two pieces, now. Dudley cut it in two in order to fit the transom, with name “Lucky Two”, into his private Museum at the Bal Harbour Shoppes in Miami Beach. If you stuck it back together, I’m sure it would do another 70.