In the 60’s, our offshore racing gang decided to invade England, which swings like a pendulum do. In 1965, Bill Wishnick and I (Bill’s money) rented Don Aronow’s old Formula 275, “Claudia II”, from Dennis Miller for the upcoming Cowes-Torquay (think: Fawlty Towers) race. (Editor’s Note: We unfortunately could not find a photo of the Formula 275 “Claudia II” or any Formula 275 for that matter, despite evidence that they most certainly existed.) We had already won the first leg of the UIM World Offshore Championship, the Sam Griffith Memorial race, off Miami in February. Dennis Miller was a champion sailboat racer, having won 63 or 64 consecutive races in his speedy (4 knots) Class B sloop, “Firebrand”. He was best known over there for “mooning” Prime Minister Edwin Heath as he passed him at the finish of the Fastnet Race. He was also one hell of seaman. The seas around England are lined with bones of men and ships. There is group there called the ‘Royal National Lifeboat Institution’ who wear a particular cap and sweater, marking them as bearers of monstrous juevos. When a lifeboater goes into a pub, he NEVER has to buy a pint. One lifeboat station at Land’s End, in far southwestern England, has an impossible launching situation in fierce weather. They built a track, like a roller coaster, where they man the boat at the top of a hill, then roar down the hill and launch the lifeboat over the crashing waves, usually landing right-side-up in smoother water. They have thousands of rescues over the years, and the gratitude of the world for saving lives. If you were going to race in the English Channel, you were going to get a beating. The weather is cold, gray and windy, just like the people.

Several Yanks showed up, including Don Aronow, who had just won the Miami- Nassau race, Jim Wynne, victorious at Viareggio- Bastia, Dick Genth and Merrick Lewis, who hadn’t won anything, but they did stay at a Motel 6. Bill and I stayed at the Dorchester in London for a couple of days. Nice place. You could leave your butt in the hall at night, and in the morning, it would be all talcum powdered smooth and sweet smelling, ready to use. We were entertained by Billy Shand-Kydd, soon to be Lady Di’s uncle, and John Bingham, 6th Earl of Lucan (think: Charge of the Light Brigade. Must have been electricians or something), soon to kill his nanny. The first night in London, we had cocktails at the Shand-Kydd estate, then off to the ‘Stiff Upper Lip’ club. Wishnick and I were good friends with Lucan and Shand-Kydd, having raced on the Formula Marine team together. I had also accompanied them to the Sebring 12 hour sport car race, which, for them, might have been named the 15 minute demolition derby. One might say that what they lacked in ability, they made up for in enthusiasm. When we left Shand-Kydd’s house, I was allowed to choose which car, out of six, that I would be killed in. I chose a little Austin station wagon. I had never even heard of a Mini-Cooper! Lucan drove across London at 80 mph with only the parking lights on. Quaint custom. When we arrived at the “Stiff”, I had two perfectly formed sweaty handprints on my trouser legs. I only wear trousers in the UK. Here, I wear pants. The club was spectacular! They had a display of food in the foyer, and one ordered one’s dinner on the spot. They also took wine and cocktail orders, so that members might dine without having to speak to the riffraff. I sat next to Harry Salzman and Cubby Broccoli, James Bond film makers. Those of you who know me personally, know that I always try to fit in. “I’ll have a Pabst Blue Ribbon, please, shaken, not stirred”.

In London high society, it is apparently necessary to use the word “proper” in every sentence. “My Gawd, Nigel, one would think that one could get a proper Martini for two bob three shillings thruppece ha’penny!” or, “Nigel gave me a proper trouncing at darts.” or “Dahling, my gardener gave me….”, well, you get the idea. The next day we drove down to the Isle of Wight, right on the English Channel, where the race would commence. After changing clothes, thanks to Lucan’s driving, we looked up Dennis Miller. Dennis was a commoner, like Bill and me, and we immediately decided to trade the word “proper”, for something much saltier. The “Claudia II” had been renamed “Broad Jumper” for this race. We test ran the “Broad Jumper” all the way to Hamble, 2 miles, where we met a Beatle looking kid named David Gillmore. David invited us to his father’s pub, “The Bugle” where we hung out until the race. People-watching heaven. We had Lord Beaverbrook, aka Sir Max Aitken, Spitfire ace from recently contested WWII, Peter Twiss, fastest man on the planet, who just flown 2000 mph, Tommy Sopwith, of “Snoopy” fame, Renato “Sonny” Levi, winner of ’63 Cowes race, the Gardner brothers, winners of the ’64 Cowes, Uffa Fox, father of the PT boat, Tage Boghammar, Swedish offshore champ and father of beautiful Pia, Dr. Emile Savuundra, noted swindler, Rookies Don Shead, Clive Curtis, Gianni Agnelli, and about 40 guys who seemed to be trying out for the lead in “Fawlty Towers”.

The drivers meeting was held at the Royal Yacht Squadron, which made “The Stiff” look like an orgy at the Hell’s Angels convention. We weren’t all allowed in, as they “could only stand so much polyester”. “Broad Jumper” was racing in the top Class, C1. In those days, C1 boats had a cabin, bunks, a loo, dishes, carefully glued to the shelf, a windscreen, and a bowrail. We assumed that these non-racing items were included to discourage us from ever coming back. Apparently, service and spare parts were very hard to acquire over there, as Dennis had not done a goddam thing to the boat since he owned it. The windscreen and bowrail lasted on the fifteen minutes into the race, where I stuffed that mother, dropping us to class C2 for inept drivers. 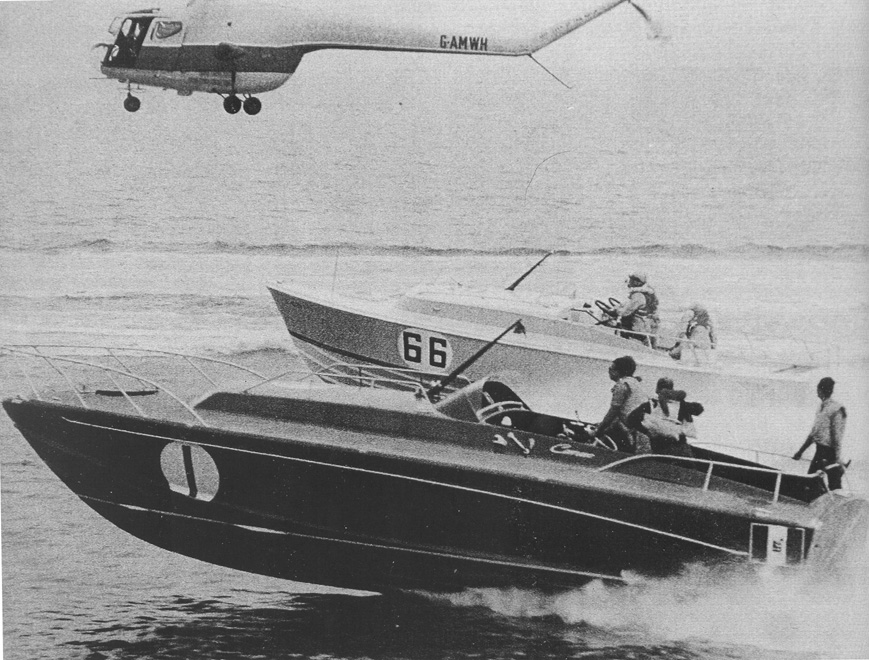 The morning of the race it was blowing and raining. Just an average day in the south of England. The raceboats, about 60 or so, formed up behind “Brave Borderer” an 80 footer with three Bristol Proteus gas turbines of 2000 HP each. It was faster than every boat in the race. They carried the photographers and some fans. The fleet strung out across the Solent in a line, and when the patrol boat fired a flare, away we went to the first check point, which was about five miles west of the starting line. Three miles up the course, we were running in the top five, when “Brave Borderer” passed us with all the photographers clicking away. The stern wave nearly rolled us. Thank God they only did that six times. The best was yet to come. We went clockwise, thirty miles to Southsea, and back again across the starting line. After 50 miles, we were still competitive, and were running side by side with Sonny Levy in his beautiful “a Speranzella”, which is Italian for a speranzella. I wanted to spend some time with Sonny, who was and is, one of my heroes. I hadn’t realized that we were going to spend quality time on the back of the same wave that we could not get over. At the northwest end of the Island there is a rock formation called “The Needles.” It sits across from a neck that narrows the water by five or six times. It also increases the water speed by about the same amount. The seas there that day were enormous. I don’t know how tall the wave was that we were on, but I do know that back of it was about four lengths of our 28’ boat. Levi got across first, then us. We followed Levi halfway across Lyme Bay, then lost him in the fog. Visibility was about half a mile, and seas four to six feet. I had to roust Dennis out of the cabin to help me navigate. He had wedged himself into the passageway, and drank all the beer. He wasn’t much help. We stayed in contention until the next to the last turn, where the port engine finally said goodbye. Dick Bertram won the race in his big (for then) 36’ Diesel “Brave Moppie”. With his usual concern for our health, he wouldn’t buy us a drink.