When I worked for Cary Marine in the 70’s, we acquired the molds for the 49’ Cigarette from Don Aronow. The 49’ was an exact 1.5 times blow-up of the then famous 32’ Cary/Cigarette. Aronow had built the first 49’ Cigarette for the King of underwater movies, Jordan Klein. It was ‘Hippie-tacky”, with shag rugs on the walls, and a pair of extremely measly Chrysler inboard engines on straight shafts with vee drives. To my amazement, the boat ran very well. I had not yet learned the mysteries of model scale. We built the first big fast Diesel runabout/cruisers in America. We used Detroit Diesel V8 engines. First, the 450 HP V8 71s, and later, the 600 HP V8 92s. Almost all of these boats were finished as ready to run vessels, with complete mechanical and electrical systems, and zero interiors. They were sold to a dealer in Italy named Filippo Theodoli. He took them to local artisans for finishing in the Italian style, and I must say, he did a fine job. His client list included titans of Italian industry, films, crooks and such. 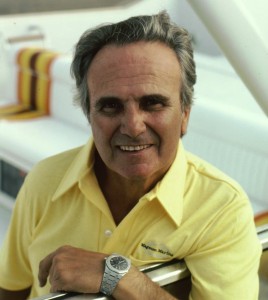 Theodoli was married to Katrin, a bright, fit, Swiss born lady who was the perfect foil for the dashing Theodoli. We called Filippo “Ted”. He was a Marchese in Italy. Some sort of royalty. When we did the Genoa boat show every year, we ate, after the show, at a restaurant in old Genoa port. The restaurant, Mario’s, had been a restaurant for 500 years. Ted’s family had bottles of blackberry brandy there that were bottled before Larry King was born, and had little medallions with the family crest on the necks. About 500 meters from Mario’s was the Maritime Office. Columbus signed out there. Ted bought Magnum Marine from Aronow, after former owner, American Photocopy, went into the hopper. Side note. The chairman of the board of Apeco(American Photocopy), was Clayton Rautbord, brother of Bobby. Bobby was a racer and very good friend of Aronow and the little people. I attended the APECO annual sack holders meeting in Chicago with Bobby. Clayton announced the APECO had made twelve million dollars in the last fiscal year. When he asked for comments, Bobby said “Heck, I made more than that, and I don’t even work”.

Anyway, Aronow had started the 53’ Magnum project, and it went with the business. Like the 49’ Cary, it was a product of the copy machine. First came the 35’ Donzi, which was too big for the Donzi factory to produce. The boobs from Teleflex, who had just bought Donzi Marine from Aronow, gave it to Don in return for his racing for them (guffaw). The 35’ Donzi was drawn by Walt Walters (great guy). It was stretched to 38 feet. The 38 was stretched to 40 feet on paper, then blown up 1.25 times. Voila, the 53 foot Magnum, and nobody broke a sweat or paid a dime! The first model was to be powered by a pair of Detroit V8 92’s, and expected 40 MPH. The Theodolis hired me to run the project for the first boat, since I had made most of the mistakes on the 49’ Cary. It was a big job. Some of the 53’s would be powered by the new V16 92 engines at 1400 horsepower each. I held a meeting regarding the salient features of the new boat versus the 49 Cary. First, we needed a 19’ cockpit to hold the new V16’s. No! It is not stylish! Downhill from there.

We had a hull under construction at the old Thunderbird houseboat factory in North Miami. We were also building the deck plug and mold at the same time. The forward deck of the 53 was about 35 feet long,and smooth as a baby’s butt. Ten guys sanded the deck for hundreds of man hours, with sanding boards 12 feet long, with finer and finer grades of sandpaper, until it gleamed like a Ferrari. Side note: When we launched the boat for tests, I climbed to the fore deck to take a line from the dock. In my stocking feet, I slid, faster and faster, right over the side. We rolled a sand finish over the Ferrari.

I had a time and money restriction on finishing the first boat. With the limited resources at Thunderbird, it was a mother! The deck mold was over 16’ wide, and 55’ long. It was also relatively flat (read: floppy).We made a spindle 60’ long out of 4” pipe, and welded on lateral beams to catch the deck edges. On the shop floor, it looked like there mains of a giant’s fish dinner. We built the deck upside down, and attached the spindle. With an electric hoist on each end, we pulled the deck from the mold, and sat it atop the hull. Unfortunately, the spindle was now on the bottom of the deck, between the hull bulkheads and the deck. I drew some cutouts on the bulkheads for access to unhook the spindle. By moving the hoists to the deck hatches and the cockpit, we were able to remove the spindle, and seat the deck on the hull for the first time. On time, at 8 AM sharp,the Theodolis appeared on the platform behind the boat. Katrin had her arms folded tightly when she asked “Who told you where to cut those holes?” “I foolishly assumed that the doors would be somewhere in the neighborhood of the companionway floor.” “I wish you would ask me before you make a decision like that!” “Lady, if I waited for you to make all the decisions that we have made, this sonofabitch would still be in the barrel.” She didn’t come by as often after that.

We finished the job on time, it worked just like it was supposed to, and was a great success. Ted was ecstatic. He decided to get rid of the original 35’ Magnum molds and make more space for the 53 stuff. One day, one of Aronow’s Jewish mafia friends approached Ted and said that he had a small company in South America that built fishing boats. He said that he would like to have the 35’ molds to build fishing boats for the rough Chilean coast. Here was a chance to get rid of the molds for money without worrying about someone competing with him. They agreed on a price of $15,000. The buyer asked Ted to give him a “Paid in Full” receipt for $1,000, for customs purposes, and that he would pay the balance in cash when he picked up the molds. What could possibly go wrong? The next day, when Ted got to work, there was an entourage waiting for him. Trucks, Sheriffs, lawyers, etc. They presented the paid in full receipt, and took the molds. They did not take them very far. One block further down Thunderboat Row, was Bob Saccenti’s Apache Marine. They offloaded the molds there, and Aronow gave Saccenti an order for a couple of boats. Ted took Aronow’s autographed picture from the trophy wall in the office, and stomped it into little bitty pieces.