Miami-Nassau Powerboat Race, 1964: Offshore powerboat racing was hitting its stride in 1964. Our local club (Miami), The Offshore Power Boat Racing Association (Top Bra?) had signed up 250 dues paying members. Local boat builders were pissing away large sums on far-fetched designs, and local racing crews had shifted their bar conversations from the size of Jane Russell’s er, breasts, to ocean racing. Small boat companies were springing up everywhere with prototype offshore craft, some by credible architects, Ray Hunt, Jim Wynne, Walt Walters, Bob Hobbs, Harry Schoell, et al. Some were built by builder/designers, like Nick Chapman, who made it up as they went along.

I had graduated from my speedy Boston Whaler 16, to a Formula 233, built by Don Aronow, and designed by Jim Wynne and Walt Walters, mostly Walt. Except for the Ray Hunt designed 25’ and 31’ Bertrams, which had won most of the recent offshore races, the Formula was the class of the field. Mine was red and white, named Challenger for my place of work, with a single 400 HP, 427 Interceptor Ford racing engine coupled to a Crusader Marine Vee drive on a straight shaft inboard setup. No one had yet successfully addressed the problem of steering a single deep vee inboard boat at high speed (relatively), but all the current offshore races were from one point to another, so we ignored the problem.

The Miami-Nassau race that year was rough. The Bertram Offshore team was faster, more experienced, better in rough water and more organized, but except for that, the Formula team had them by the ass! We had ten new Formula 233’s, with mostly rookie crews There had only been nine or ten post-war offshore races to that point, so there were few veteran offshore racers. Our Formula team included Jim Wynne, me, Stu Jackson, Brits Billy Shand-Kydd, the Earl of Lucan (I recall that he had not yet been promoted to Earl at that time, and he was Lord of something else, maybe Bingham), George Peroni in Aronow’s former 233, and some other neophytes. True to form, The Bertram 31’s finished 1,2,3. We finished 4,5,6,7,8,9,10,11,12, and 13th. I won Class two, Wynne won Class 3.

At that time, I worked for the Formula dealer, Challenger Marine, in North Miami. We considered the result to be very positive, and we drank to our success. We drank to a lot of other things, too, like our laundry coming back, that sort of thing…

Anyway, in those days, we raced to Nassau on Thursday, and partied until Sunday, when we raced “Around Nassau”, which, conveniently, is an island. That schedule allowed for some excellent parties, put on by the Bahamian Government, and Sherman “Red” Crise, the S.O.B. that put on the race. One such party was in the garden at the Montagu Beach Hotel, just at twilight. It was cool, the palm trees swayed, the Junkanoo band softly played Harry Bellafonte stuff, and we drank Goombay smashes at an alarming clip. Everyone was dressed. I even wore socks. I was accompanied by my beautiful wife, Deanna. As we mingled and chatted, we were approached by a very elegant gentleman in a blue blazer (No, the jacket). He correctly assumed that I was connected to the race, since I was still wearing my crash helmet. He asked if I know Billy Shand-Kydd (who was then Baby Di’s uncle). “Yes, he is on our team”. The gentleman introduced himself as Major Neil Fletcher, Shropshire Guard, British Army. He said that Shand-Kydd was an unusual name, and that he had been in RAF Cadets with one, in the Big War. He would like to meet Billy. I looked around for him, but he hadn’t shown yet. We invited Neil to stand with us and chat. We kept our upper lips stiff (makes you talk funny. Another piece of the puzzle…) and waited for him to arrive. When he appeared I introduced them. Neil asked about Billy’s brother, who apparently had flown over the family home upon graduation from RAF fighter school, did a victory roll and, I quote, “went straight into the fooking garden!”

The only food available at the shindig was little green things and little yellow things. I was hungry for some authentic Bahamian food, so we invited our new friend, Neil, to dinner at the Chinese restaurant, The Golden Buddha Conch Shell. We had a very enjoyable evening chatting with Neil, and at the parting, we committed #9 on the list of stupid things to say, “If you are ever in Miami, give us a call….” Neil, as it turned out, was on his way to British Honduras (now Belize) for jungle rot training, or something. Frickin’ Brits used to be EVERYWHERE. 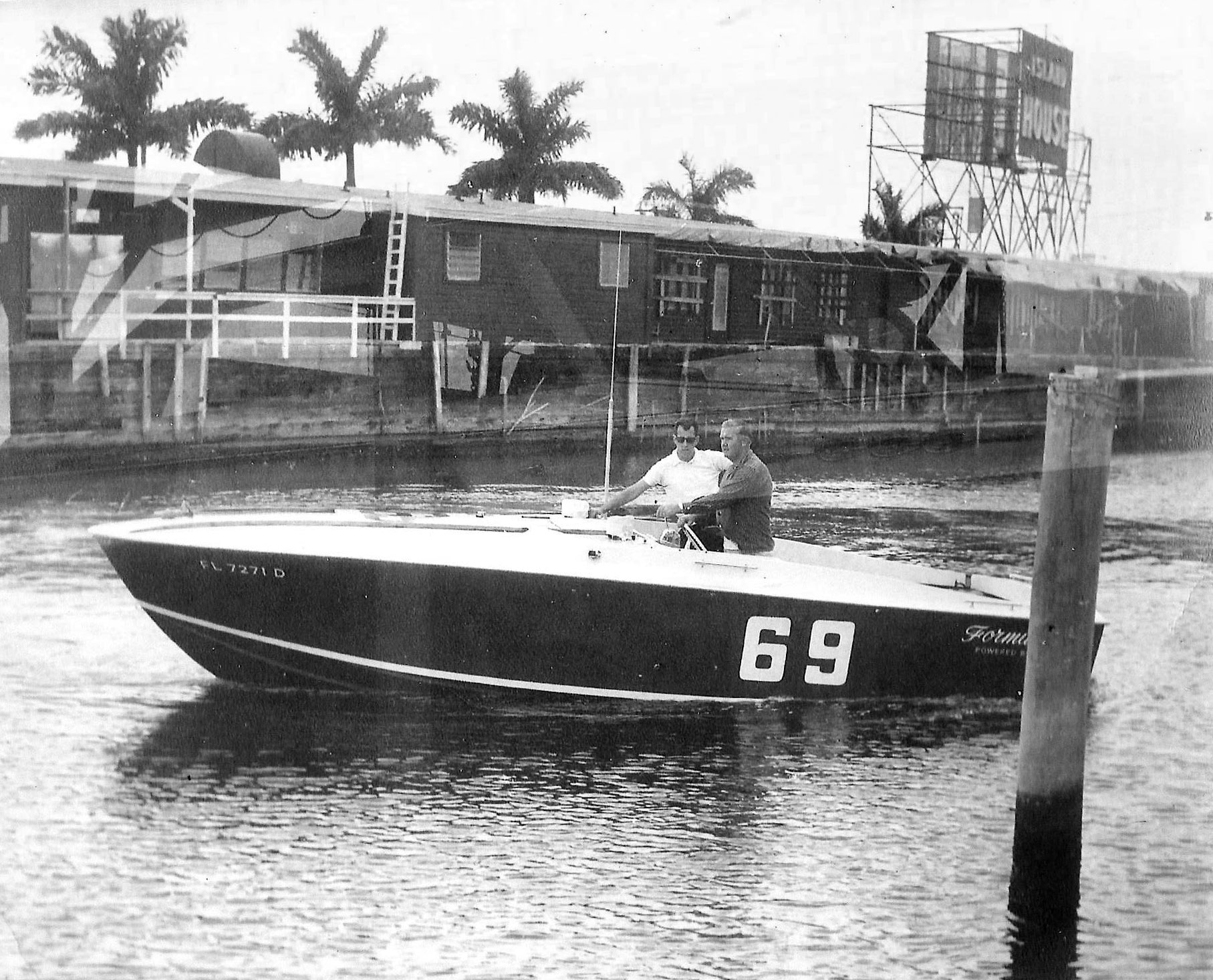 Anyway, about ten days later, we got a letter from the Honduran jungle saying “I will be passing through the Miami airport next whatever, and, if it is convenient, I would like to take you up on your kind offer to visit for a few days. If not, just ignore this letter and I will tell all the Brits what sonsofbitches you are”. We picked him up, and he stayed with us for two weeks. I could see that I was in trouble on the first morning, when I got up, dressed in my finest boxer shorts and Archie Bunker T-shirt, for breakfast. I had just finished farting, when the Major glided out of my workshop, where he had slept, fully dressed including ascot! Apparently, British people don’t ever fart. My kids were small, and real pains in the ass. I had hoped that the Major would liken our house to the recent jungle training, and beat it. Nope, He was plenty tough! We actually had a great time, laughed a lot, and saw all the Miami sights. (It was a decent place to live, in those days). The two weeks ended too soon, and we bade Neil a fond farewell. He countered with good old #9. “If you get across the pond, do come stay with us in Plymouth”. Me: “Christ! You live in a car?” “No, no!” “We have a thousand year old mansion in Plymouth. The steps where the pilgrims (British for scum) boarded the Mayflower are still there”. “Do come visit”. Well, damned small chance of that. The next summer, 1965, the Broad Jumper team went to England! My wife ratted us out to the Fletchers, and after a couple of days at the Dorchester Hotel in London, she took a train to Plymouth, to await our arrival in the Cowes-Torquay offshore race, a few days later. The race was rougher than hell, and by the time I reached the finish line at Fawlty Towers, I was beaten to a pulp. I had bruises everywhere, a couple of suspected broken bones, and was barely mobile after the automobile trip to Plymouth. I settled into a hot bath with a glass of Pusser’s Rum at the Fletcher Manse. I was rubbing my bruises when Fletch came in and said “I should have asked before… you do have a morning coat?” “Umm, what is a morning coat?” “Oh, my! I must call the other Officers and tell them not to dress for the reception.” “For what?” “We are having a reception in your honor tonight”. “I will be lucky to get out of this tub.”

I was able to drink enough rum to make up racing stories and entertain the cream of the Shropshire Guard. Turned out that Fletcher had a Batman. “You get a lot of crime out here?” “No, no. You might call him a butler. I also have a gardener and a cook and a Rolls Royce, all furnished by the Army.” The next morning, Fletch showed up at the breakfast table in four or five hundred dollars worth of clothes. He rang a little bell, and we were besieged with people bearing English breakfast and tea and such. After breakfast we toured the Shropshire Military base. They had a soldier there whose duty was to keep the local sheep off the airstrip. I never farted once the whole time I was there. I was careful not to invite anybody anywhere.