When I see the speed of modern offshore catamarans, I realize that technology has kicked pleasure boating into a realm of performance that was previously only mentioned after a large number of adult beverages. It was a long time coming. Inshore cats and tunnel boats were refined long before the offshore boats. There is a good reason for that.

Most of the development in high performance boats is a direct result of offshore racing.The first real sport boat company was Donzi Marine in 1964. By then, fiberglass was usable, marine engines were a little stronger, and a few naval architects, namely Ray Hunt and Wynne/Walters, Sonny Levi, et al, were drawing “fast” boats. Kiekhaefer and Volvo built sterndrives (I still think they are instruments of the devil) and the economy had improved a little.

More offshore races were offered to the racers. England, which swings like a pendulum do, came up with the Cowes-Torquay race in 1961. The New York group offered “Around Long Island” before that. All the races were long distance, more than 183 miles and generally rough. In an effort to level the playing field, we formed the Union of International Motorboating’s Offshore Commission. It was intended that the rules would allow one to race anywhere on the globe, and be legal. This proposition delayed engine development for years. The mills of the UIM rules committee ground very slowly, and not exceedingly fine. It took years to ‘homologate’ an engine. Cubic inch maximum of 500 c.i. x 2 meant that open class boats had about 6 or 7 hundred horsepower. In addition, the engines had to be available to all comers at a reasonable price. Simple truth. Offshore inboard cats need to be about 38 feet long to handle the head seas on the average race course. 6 or 700 HP would not “get it up” with the then-current hull technology.

Lots of people took a whack at building cats. Maury Fortney, in California, had the Jones Boys, Ron and Ted, make a really advanced 36’ or so cat using Jones’ Unlimited Hydroplane technology of honeycomb aluminum and such. It was called “Zenor Zippe” for one of Maury’s Mexican zippers, I think. Still too heavy for that day’s horsepower. I drove it before a Bahamas race, and it went 58MPH into the wind, full of fuel, ready to race. Even the outboard cat development lagged because of the available stock horsepower. Finally, the offshore racing climate began to bloom. More builders, boat and engine, showed up. Boating and sportswriters came. Egomaniacs came. Rich guys came. Good looking women came. European captains of industry came. Good looking women came. Did I mention that good looking women came?

Finally, 1977 arrived, along with some good looking women. Mercury Marine produced a homologated big Chevy V8, along with Sam Sarra’s crashbox transmission and the #3 superspeedmaster drive. Over in England, James Beard and Clive Curtis had a small boat shop in Netley, Cougar Marine, building outboard tunnel hulls for F1 and SST120 or whatever the called the single engine class. They found a client, Ken Cassir, who sold flying carpets (I think) and wanted to build a big cat. Finally, all the pieces fell into place. The built the 37’ cat, Yellowdrama, of exotic plywoods, and did heroic weight saving (They never let Clive, who weighed 14 stone, ride in it) even modifying the speedmasters to fit at an angle into each corner of the tunnel, with the skeg moved, to point straight down. Water tests were not without difficulty. Finally, they made some runs on SouthHampton waters at speeds never seen before on a full sized offshore boat. Over 90 MPH. The day of the catamaran had finally arrived. All that was necessary to prove it was a reasonably calm sea in the upcoming Cowes-Torquay race. They got it. After a slow start, Cassir and Beard passed American, Billy Elswick like a freight train past a tramp. Offshore racing was never the same again.

Cougar Marine started building in Aluminum or wood, and building for Class I, II, and III, all of which won several World Championships. With customers and investors at the door, they took on staff, and built some beautiful boats. They opened a US branch on Thunderboat Row, and made me President. We built some great stuff. This is crux of my story. No one of note was successfully building large viable cats. Someone once said “Imitation is the sincerest form of thievery”, or something like that. One of my heroes in raceboat design and construction is Peter Hledin of Skater Marine. He is a humble hero, and a great technician and boatbuilder.

But, Peter was building this: 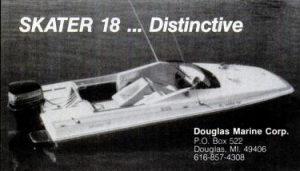 Then he saw this:

and his next boat was this: 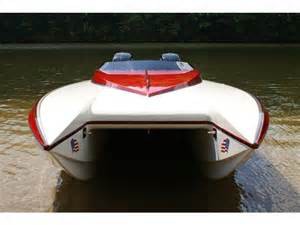 Hmmmmmm! Most everyone building cats today and yesterday admit to borrowing something from Cougar. When you blast your MTI or Skater or Mystic to 200 MPH, remember the visionaries who helped get it all going. Somewhere in Heaven James Beard and Clive Curtis are looking down and saying “You Bastards”!