In December, 1965, I worked at Donzi Marine on Thunderboat Row. Life was good. We had knocked Bertram boats off their high horse, and won most of the offshore races that year. Bill Wishnick’s 28’ Donzi, the “Broad Jumper” had just won the National High Point Championship, with record setting victories in the Sam Griffith Memorial, The Hennessy Cup in California, and a 2nd in Miami Key West. Bill and I shared driving chores, and we had fun. Donzi boats were selling like hotcakes.

Over the years, My friend, Jake Trotter, then our glass foreman, and I had delivered about a hundred boats of various types to Nassau, in the Bahamas. The Bahamian government had a 37% import tax on boats shipped in, but nothing if they came on their own bottom. The smallest boat we delivered was a 15’ Thunderbird with a 50HP Mercury outboard. We usually took two at a time, and charged $125 plus expenses. $125 doesn’t sound like much today, but in the early 60’s, it would buy a lot of fun in Nassau. Truth be told, we would have done it for nothing.

Our dealer in Nassau was Bayshore Marine, on Bay Street. Bayshore was owned by Sloan “Bunty” Farrington and Durward Knowles, famed Olympic Star Class sailor. They were dealers for Bertram, Formula, Boston Whaler and Donzi. Bunty took all of the easy deliveries, such as 31’ Bertrams, and left all the tough ones for Jake and me. Nassau is the Capitol of the Bahamas and lies on New Providence Island, 183 miles due east of Miami. A voyage to Nassau generally follows the course of the famed “Miami-Nassau” offshore race. Two of the three legs of the trip are over historically rough water. The first fifty miles, from Miami to Cat Cay crosses the Gulfstream, which flows northward at about 4 knots. When the wind blows from the north or northeast, common in the winter, it kicks up the ‘stream with big seas. On a rough day, crossing the stream usually involves choppy seas near shore, and rougher and rougher waves to the axis, called ‘the hump’. A ten to fifteen knot wind can kick up ten to fifteen foot seas! After the hump, it gradually calms until one reaches Cat Cay. Next leg is called ‘The flats’ due to the two fathom deep (12’) water on the banks. There is a correlation of maximum wave height vs. water depth. This portion of the trip is usually the easiest part. While the seas are limited in height, a stiff wind can stir up a nasty chop, and give a small, fast boat a hell of a beating. It is about 75 miles from Cat Cay to the Berry Islands. Just before the Berries, is Northwest light (sometimes). It marks the west end of the “Tongue of the Ocean” nearly a mile deep arm of the sea. A fishing paradise, with hundreds of world record gamefish killed there for no reason. It is also a graveyard for foolish captains, and not a few drug planes, who apparently were sampling the potency of their cargo prior to landing. The Tongue is about fifty miles to Nassau. 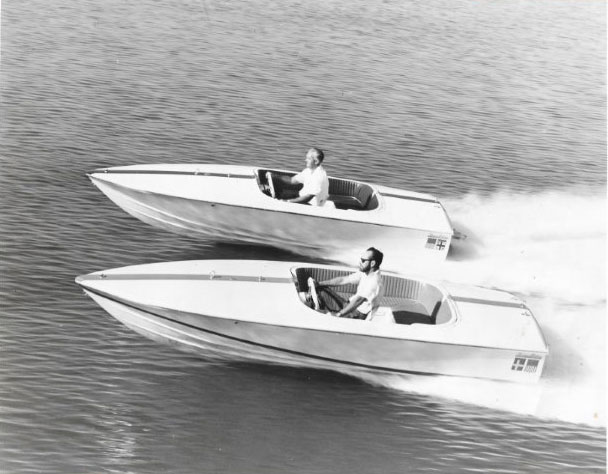 In late December that year, we had a couple of Donzi 16’s that were waiting to be delivered to Bayshore Marine. They had been finished for several weeks, and the customers were making ugly sounds about cancelling the orders. The only smooth days that winter were during the week, when we were at work. Just before Christmas, Jake and Mike Collins and I were having Friday lunch at Tony Roma’s in North Miami. After a few brewskis, someone said “Let’s take those 16’s to Nassau tomorrow”. “Jeez, it’s only 4 days ‘til Christmas”. “Yes, but the weather is only going to be nice for one day, and if we don’t go now, they might cancel the orders”. After a couple more beers, “Hell, let’s go!”

When we delivered small boats to the islands, they never had decent compasses. We had a couple of D12 ‘Bomber compasses’ from old race boats. D12’s were excellent, robust compasses, but had flat lenses that required looking down on them to read the course. No problem. We fastened them to boards, and held them down with our feet. The 16’s had small gas tanks which precluded going ‘nonstop’. We decided to go through customs in Cat Cay, and top off the fuel there. We carried about as much beer as gasoline. 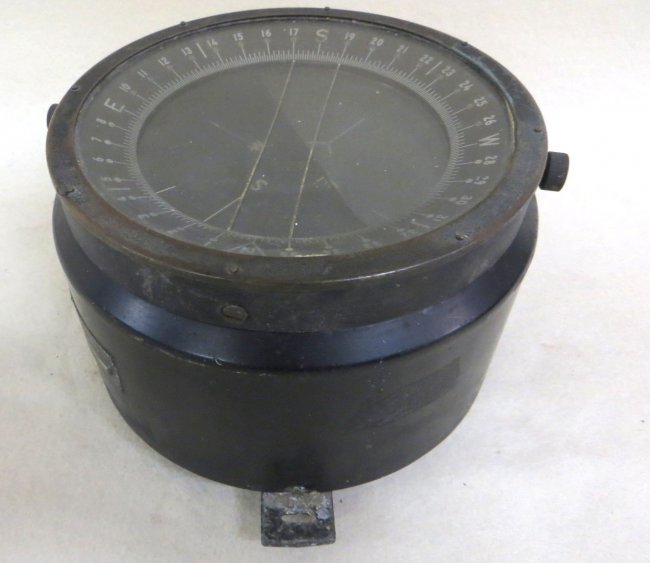 On a sunny December morning a 7 AM, we left Thunderboat Row and roared down the bay to Haulover Cut and another wacky offshore adventure. My 16 had a 289ci Interceptor, 165 HP so I took Mike as my passenger. Jake had a 110 Volvo and the beer. We bashed our way out the Haulover and onto the blue Atlantic. There was a light breeze from the north. The seas was comprised of long, low rollers from the portside, with a foot or so chop on top. A glorious day. We ran side by side at about thirty miles per hour, steering a course of 115 degrees, allowing for the drift. About five miles out of Cat Cay we found a basking shark, and circled it a couple of times to see if it was a whale shark. For some reason, these huge fish attract lots of small ones, and the ocean was alive with fauna. Glorious day.

We entered Cat Cay harbor to fuel up and do customs. Gene, the Customs and Immigration guy shouted “Damn, Brownie! What you doin’ here today in those little boats. You crazy, mon!” To our dismay, my boat had consumed nearly twice as much fuel a Jake’s, and we realized that I had to stop again before Nassau. Not as easy as it sounds. These days, there is a beautiful marina and yacht club at Chub Cay. Back then, the marina was under construction, and they occasionally had fuel to spare. Around the corner from Chub is Frazer’s Hog Cay, with a rickety gas dock, and highly suspect fuel. Many boats back then carried funnels with chamois skin filters to catch the water and rust from the tanks.

On our way again, heading toward Sylvia Light, east of Cat Cay, we were in high spirits, and picked up the speed to 35mph. We wanted to be sure to reach Nassau before dark. We reached Sylvia light without a hitch, and set the compasses right on 90 degrees to pick up Northwest Channel light, whether or not it was lit. About 15 miles out of Sylvia light, we saw the bare masts of the “Tropic Bird,” a 50’ wooden catamaran tour boat out of Nassau. We were somewhat concerned that the Tropic Bird was motoring, not sailing in the light winds, and that his course was fully 20 degrees to the left of ours. I hailed Jake to stop and come alongside. “What is your compass reading?” “90 degrees”. “What’s yours?” “90”. “We had better go talk to Ferdie”. Ferdie Bethel was the genial captain of the Tropic Bird. We pulled alongside and hailed the crew. Ferdie leaned out of the wheelhouse and said “I might have known it was you crazy bastards out here in the middle of nowhere in those toy boats. Where you headed?” “Northwest Light”. “No you ain’t, Mon. I am aiming straight for the light, and you guys are way off”. We argued with Ferdie, for a couple of minutes, questioned ourselves, our compasses, our sanity, had another beer and blasted off. I had a lot of faith in our navigation. We were all Miami-Nassau veterans, and had great confidence in our ability. I made some mental calculations for ETA at Northwest Light. Arrival time came and went. No light. Nothing to be seen in any direction. We motored on for 20 more minutes. We were now running in very shallow, calm water, with Mike standing on the deck as lookout. Nothing. Rats! Maybe Ferdie was right after all. Mike called “Land Ho” thirty five minutes after my dead-reckon arrival time. We hadn’t expected to see land, just Northwest Channel Beacon Light, which is out of sight of land. We were in very shallow water. We knew that the Berries stretched off to the north, and the Joulters and Andros Island off to the south. The pass between them was narrow, and we had apparently missed it. The land that Mike had spotted was low, with no buildings. We weren’t in too much trouble, except for being a little low on gas. We crept toward the shore hoping to find someone to tell us where the hell we were. When we were about 200 yards from the beach, we heard “Hey, Mon, where you tink you’re goin’?” “We are heading for Chub Cay. Which way is it?” “Never heard of it”. Holy Shit! The theme from Twilight Zone was playing in recesses of my mind. “Well, which way is Andros?” “Down south”. “How far?” “Two days”. “By what?” “Sailin’ smack, Mon”. “Whew, you scared me there. What do you call the Cay where they are building the new marina? “Dat’s Crab Cay”. “Where is that?” This is it”. I considered the recent events and said “I don’t see how in the hell we missed Northwest Light”. “Mailboat knocked it down last week”.

We were quite relieved, and my navigational self-esteem got up from the floor, where it had been cowering for the last hour. We celebrated with a couple of beers which we shared with the Bahamians who had helped us. One said, “Just for de record, Mon, you crazy for being out here in those little boats in the winter”. We headed south, and gave the island a wide berth as we swung into the tongue of the ocean. We celebrated the fact that the gas dock was open with a couple of beers. We were in high spirits, no, very high spirits when we pulled out for Nassau. We hugged the shore on Whale Cay, rounded Bird Point, set the compasses for 124 degrees headed for the finish line. “Last boat there buys dinner”. When came out of the lee of the Berries, we discovered a huge swell from the north. On top of the swell was a two or three foot chop. I couldn’t hold my compass down long enough to read it, so I slowed a little, got a reading, and picked a big thunderhead right on course. We would see Jake occasionally, when we both crested a wave at the same time. He always had the steering wheel in one hand, and a Heinekens in the other. The north swell drove us further and further south. By the time we were half way, the swells looked like the Alps. We were actually able to run really fast down the backside of the swells, and then struggle up the other side. We snapped the tonneau cover on where we could, to keep the boat as dry as possible. Jake had done the same thing. Once, when we jumped, we only about 30 feet apart. The sea finally shoved us ten miles down the island, and we crossed the reef at Lyford Cay into smooth water. We ran up the inside of the reef to the dock at Bayshore Marine. A man came over to help with the lines. He said “Those are great little boats. I am waiting for one to be delivered, but with this damned weather it will be past Christmas”. “Don’t be too goddam sure. One of these is yours”. “You came across today?” “Yep”. “You must be crazy!” “Yeah, we get that a lot”.