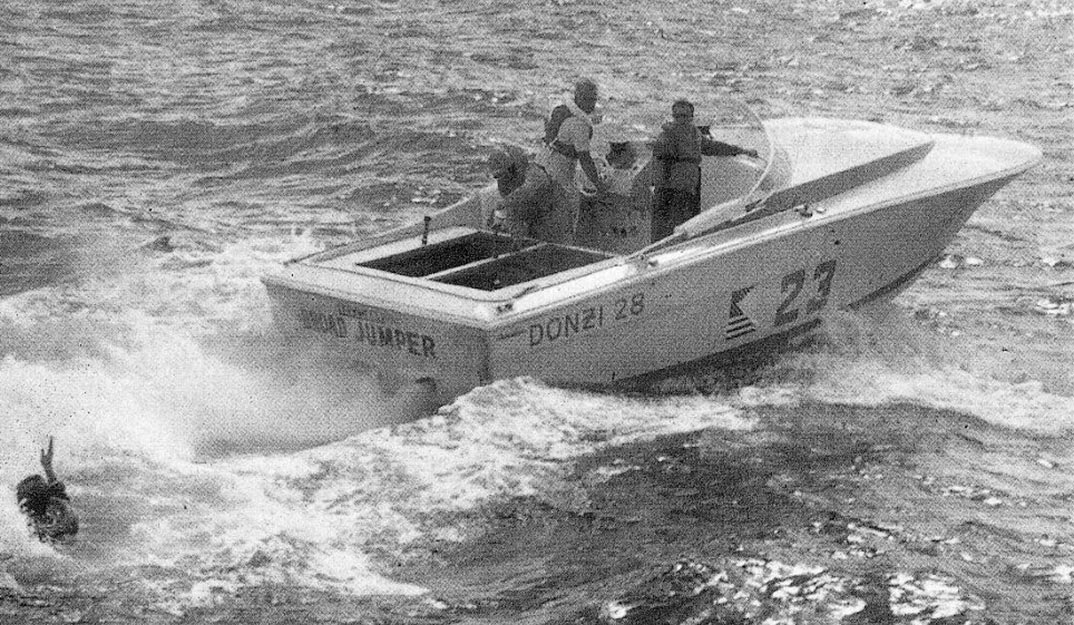 Starting in 1961, I raced a 16’ Boston Whaler with a 75 HP Johnson outboard motor (actually Challenger Marine’s demo) in a couple of “Up and down (and around) the beach races”, with trophy results. In 1963, we had a race from Miami to Bimini and back, over two days. I had dreamed of racing in a real ocean race, against ranked opponents, since the onset of offshore racing in 1956, and by God, I was about to do it! Jim Breuil, Jr., Carl Moesly, Jack Manson, Howard Weiler, Bobby Ridgell (Mercury team driver, brother of the great Roy) the Jacoby girls, Rene and Gale, and several others lined up for the start off Baker’s Haulover on Miami Beach. It was a little bumpy, and we collected some valuable “air time”. Halfway across, the 16’ Whaler seemed kinda small. We finished second behind Ridgell, and spent a wonderful weekend on Bimini with some of my idols. Played poker, dove for conch, water skied, drank, ate Bimini bread. Excellent days. We had a service there on the hill overlooking the sea for Sam Griffith, who had just passed away.

It was at that point that I realized that I had to have my own race boat. Upstart Don Aronow was making a new boat called “Formula”. I spent hours explaining to him how stupid the name was, that it would NEVER catch on, but he would just not listen. I immediately ordered a red Formula 233 with a 400 HP Ford 427 Interceptor on a Crusader vee drive. I still remember the look on my wife’s face when I told her about our new boat. I had some success with the new boat, with two second overalls, and a Class II win in the 1964 Miami/Nassau race, 5th overall against 50 boats. Aronow, never realizing what a mistake he had made with the Formula name, sold the company to Thunderbird for big bucks, and started a new company called…… wait for it!…….”DONZI”! For Christ’s sake Don, these stupid names gotta go.

At that point, I was GM of Challenger Marine, now TNT, and the largest Formula dealer. Apparently the lousy name didn’t bother the customers, either. Aronow hired me away with promises of money, fame, loose women, booze, drugs, etc. He forgot to tell me that all those things were for him, and I got to work 12 hours a day for several months for the same money that I had made at Challenger. One thing made it all worthwhile. He let me drive the new Donzi race boats. He gave me to Bill Wishnick, who had just purchased the 28 Donzi that Jim Wynne had driven to second place behind Jack Manson’s big Diesel boat, “Allied GX” in the Miami/Key West race, November 1964. Bill named the new boat “Broad Jumper”, and he and I set out to teach him the finer points of offshore competition. I forgot to tell him that I was just starting out in the big leagues myself. Bill was not very well coordinated at first (and second). He seemed unable to anticipate the seas ahead, and we often heard the twin 427 Interceptors humming at 8000 RPMS. Bill decided that I would drive, and he would watch me for a while. Hooray!

Our first race was to be the February, 1965 Sam Griffith memorial. We were beyond excited as we milled for the start. Our crew consisted of Bill, his brother Jack, Davey Wilson and me. Unfortunately, the cockpit was made for three men (or women) abreast, and we had four. What we didn’t have was trim tabs, and, with a brisk wind out of the west/southwest at 18-22 knots the seas were smooth along the first leg of the race, from Government Cut in Miami to Fort Lauderdale. After rounding the check boat at Lauderdale, we started across the Gulfstream WFO. The slight following seas had a rhythm, and we were able stay wide open, with just a microsecond of throttle reduction between crests. One by one, we passed my idols until we came up even with the mighty “Holocaust”, a 233 Formula driven by Sam Sarra (who would ride me the following year), powered by twin tandem turbo Daytonas on one prop. Sam was faster, and would not let us pass, until the larger and larger seas suited our longer hull, and we took the lead. High fives almost all around! We were laughing and yelling and having fun, until Bill noticed that Jack looked like he had eaten a rotten oyster. He was grey, and in pain. The seas had been increasing by the mile, and now we were spending about 50% of the time in the air, and landing on Jack’s side, sometimes in a heap, with Jack on the bottom. By the time we got to Bimini, the seas were five or six feet. When we turned the check boat at Bimini, we were in the beam of the seas, sometimes landing completely on our side, still running wide open. Jack Manson was about a half mile behind.

Nobody wanted to slow down (we didn’t actually ask Jack, but we knew that he was game). I told Bill that we would put Jack off at the Cat Cay check boat, “Conch Pearl”. I guess Bill assumed that we would mosey up and step aboard. Bill and Davey got Jack up on the engine hatch as I slowed down, and, as passed the check boat, I helped Jack overboard. Davey was adding oil to both engines (they didn’t seem to like the 8-9000 RPMs that Bill had given them.

By now, Manson was right on our ass, and by the time we got back up to speed, he was right beside us. We were now heading toward the finish line 50 miles away, but in a 5-6 foot head sea. We filled the ballast tank (a water tank in the bow of the boat, holding 8-900 pounds of water, to hold the bow down) and let ‘er rip. We stayed slightly ahead, through major effort, and occasionally ended up in heap on the floor. Once when I regained my feet, I got back to the wheel and found Manson right beside us. I waved to Captain Manson. He couldn’t wave back, as the sonofabitch was having a sandwich and a beer in his 48’ 22,000 pound yacht! On one “floor conference”, I asked Bill if he was OK. He said “I would rather die than let that SOB outrun us.” “Me too. Let’s go!” We dumped about half the ballast and picked two or three MPH (and occasionally a few feet of altitude), and moved steadily ahead of the GX, only diving the Broad Jumper 40 or 50 times. Finally, on the Miami side of the stream, it was smoother, and I turned the helm over to Bill to finish the job. We won some more after that, but, like your first girlfriend, they are just not the same.