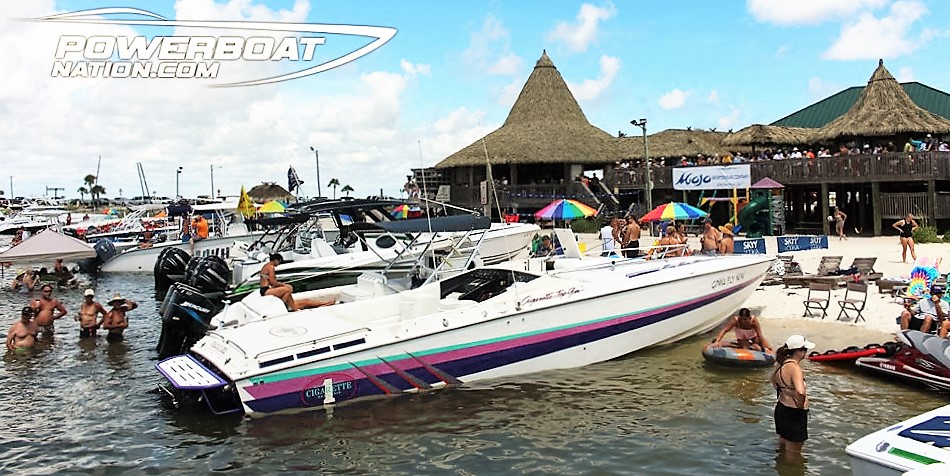 This year’s FPC’s Emerald Coast Poker Run was HOT! Another great big turnout of boaters from all over the country took part in all of the awesome events planned, from the street parade to parties and the poker run itself! Poker run teams from as far away as California, Colorado, and Idaho all had an incredible time in Florida’s Panhandle.

Wednesday kicked things off to a fantastic start with the parade and street party that saw thousands in attendance. Everything from Skaters to Sunsations, DCB‘s , Cigarettes and more turned up to really bring the meaning of the word POWER to powerboating.  PBN-Brad was running the big blue 50 Skater “Terrible II” along side the red 46 Skater “Terrible”, both with 1550 Sterlings burning C16.  After 2 days of hard running and consuming over 400 gallons of fuel both boats returned with zero issues.  Fast, strong, and dominating the water all weekend.

Thursday was the Miss Boat Week Bikini Contest (See Photos Here) at Al’s Beach Club and Burger Bar showing off nothing but the most beautiful woman in the boating world. Always a great time, the turnout was bigger than ever and the ladies brought the house down!

Friday the events fun run and after water fun  partying at the numerous hot spots around Destin and Fort Walton Beach.  If you were there we hope you didn’t miss out on the Rockin’ the Docks Captains Party at AJ’s where EVERYONE was having a great time!

The Saturday night finish at the convention center brought out the usual long fight at the table to win the event’s grand prize, a Ford Truck.

The Emerald Coast Poker Run once again proved it is an event for everyone, with two separate entry classes bringing small sport boats to the same level of the big, super powered performance, pleasure boats.