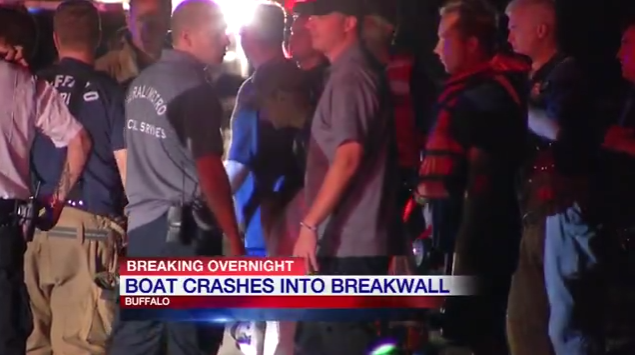 It took the Erie County Sheriff’s Marine Unit, the Fire Department, the Buffalo Police, and the Coast Guard all working together to rescue six people from Buffalo’s waterfront Monday morning.

At about 2:00 a.m. the call came in that a boat had rammed into the breakwall north of the Small Boat Harbor. Early reports stated that there were believed to be several people in the water but after slowly approaching the boat the Coast Guard discovered that there were five people still on board the stranded craft.

“The operator of the vessel that actually hit the break wall had a severe head injury. So he was confused as to how many people were actually on the boat,” Michael Tuberdyke, a Buffalo Fire Division Chief, said.

After learning of the possibility that there might be one boater still missing, the Coast Guard was able to find him sitting on the actual breakwall after firing off an illumination flare.

“We fired off an illumination flare into the sky. Once we fired that off, we were able to light up the area where the initial impact of the boat was on the break wall. We were able to find the person, sitting on the breakwall,” Jeremy Bossinger of U.S. Coast Guard said.

Five of the six people on board the craft were taken to the hospital for serious injuries ranging from lacerations to possible broken bones.

Cody Pudlewski, 21, has been charged with BWI and released on tickets.