The 64th Annual Los Angeles Boat Show opened it doors yesterday,  January 9, promptly at noon to an eager crowd waiting at the gates to be let in. Once inside of the famed Pomona Fairplex, where the show has been held since 2017, the masses were treated to sensory overload of new boat bling, the latest technology and the hottest performance boats on the West Coast–most of which were under the single roof known as the High Performance Powerboat Hall.

The media group and Southern California boat show producer Duncan McIntosh Company acquired the Los Angeles Boat Show from the National Marine Manufacturers Association in 2016 and moved it from the Los Angeles Convention Center in downtown L.A. to the home grounds of the L.A. County Fair for its inaugural show three years ago. Since then, the exhibitors, as well as the crowds have been steadily growing–attracting new exhibitors and ones returning from the heyday of the NMMA.

This year saw the repeat appearance of the marine parts and accessories giant CP Performance and sister company Hardin Marine who came all the way from Palm Coast, Florida. In their booth located in the first (and largest) building was a dazzling display of headers, exhaust manifolds, sea strainers, gauges, steering wheels, any any other item that any boat might need… or want. After nearly two decades of displaying at the show, the company still sees the value of coming to L.A.

” We come because it’s a huge enthusiast market. ‘So cal’ was the innovator of custom boats and being the largest specialty supplier means we’re here to support all of the boaters.” 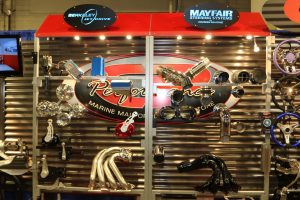 The performance industry powerhouse Mercury Racing also saw the value of appearing in Los Angeles. General Manager Stuart Halley, National Sales Manager Kevin Skiba and Project Manager Nick Petersen all made the trip from their icy home base of Fond du Lac, WI to join in on the California fun.

“This show has gotten more and more popular, so we’ve been coming out for the last couple years with just ‘boots on the ground,'” admits Skiba. “We see a lot of our boat building partners out here so we decided we wanted to support them and showcase our products, as well.”

Most of the West Coast manufacturers have all claimed/reclaimed their territories in Pomona, reminiscent of the “good ol’ days,” pre-2008. The El Cajon builder DCB Performance Boats brought their impressive M35 Widebody with twin Teague Custom Marine 1450 supercharged engines, a new M33R outboard cat with twin Mercury Racing 450Rs, a pair of open and closed bow M28R with Merc 400Rs and 450Rs respectively and an M31 sterndrive boat. 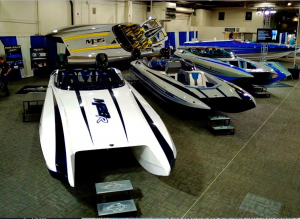 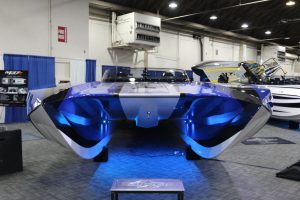 Eliminator Boats of Mira Loma has five of their most popular models on the floor, ranging from their family-friendly Fundeck to their reimagined 36′ Speedster with twin Mercury Racing 1350/1100s–the largest vessel in the company’s lineup. They also have their merchandise booth in full effect, for any and all Eliminator swag. Company owner Jake Fraleigh enjoyed the company’s very busy 50th Anniversary year in 2019 and expects an even better, busier 2020. 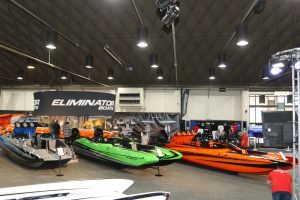 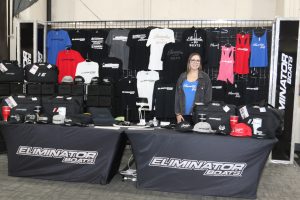 Nordic Boats and Hallett Boats of Lake Havasu City, AZ moved in to their usual massive square footage space to accommodate all of their eight various boats. Debuting yesterday was the all-new Nordic 48′ Vee bottom and the 31′ flat deck catamaran with a pair of Mercury Racing 400Rs. Company General Manager Thane Tiemer reports that the company had a record-setting day yesterday, with the most number of deposits taken for new boat sales. 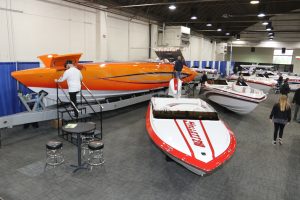 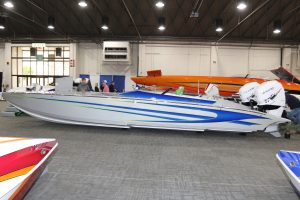 Interceptor Boats is making a big push in 2020 to make big waves on the water. Bringing their 28′ Kool Kat Deck Boat, 26′ Kool Kat Deck Boat and their latest creation–the 2500 vee bottom. General Manager Troy McIntosh has been hard at work setting the company back on a positive course and following up on all of the customer service issues that was left for him since taking on the position last April. Check out their offerings. 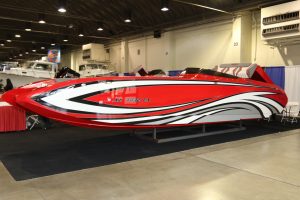 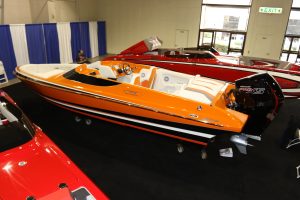 Lavey Craft Motorsports brought their offshore race-pedigreed 29′ NuEra vee bottom, which raced (and excelled) in the Factory 1 class in the early 2000’s. Fast forward to 2020, the same hull can be upgraded with all of the current bells and whistles available to new boat builds–while still enjoying the rough water capabilities that the NuEra provides. In addition, the Corona-based builder Chris Camire also brought their RPM 26′ Redline catamaran, powered by a single Merc 700SCi. Lavey Craft is also well respected in the off-road world since they introduced their custom fiberglass, gelcoat body kits for side-by-side OHVs. 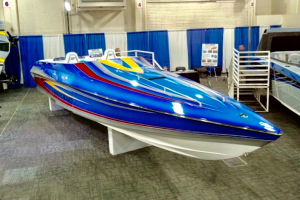 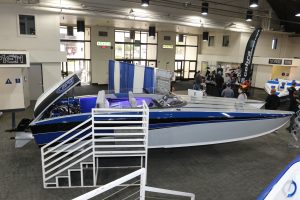 Shockwave Boats of Corona, CA had the most wide-ranging variety of the performance fleet–from jet boats vees to their larger 29′ Magnatude, from deck boats to fast cats, all were well-represented. Company owner Bob Anderson has managed to stay busy building boats, not missing a single boat show–even through the downturn of 2008, and he credits good, honest work and his loyal following of the Shockwave family for his continuing success. 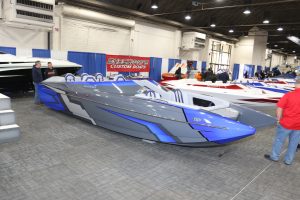 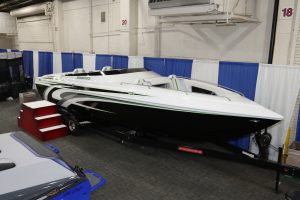 Cobra Performance Boats of Montclair, CA brought a trio of their most popular models–a pair of 23 Razors and 280W Python deck boat. Company owner Jeff Bohn continues to build his impressive reptilian brand for the enjoyment of his proud fleet of boat owners. 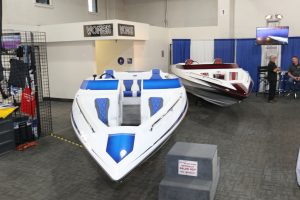 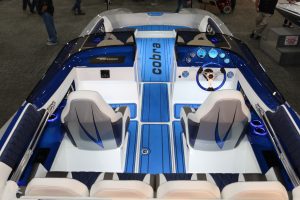 A newer company with a long boat building history would be Barron Boats of Azusa, CA. If the name sounds familiar, it should. It was the famous surname attached to Hallett Boats for decades. Company founder Jerry Barron started the company in 2017 with their beautiful 290S sport deck boat and has now debuted the all-new 19′ 190 RS ski machine, that can be equipped with your choice of outboard, V-drive or jet power. “So I designed and built this boat just to kind of go back to my childhood a little bit,” Barron says. “Nobody has come up with anything this small, that’s this sexy and bitchin’ in 30 years. I’m just trying to find a nerve with the public—something that they don’t have that they’re looking for.” The company also has a new center console in the works that should be coming later this year. 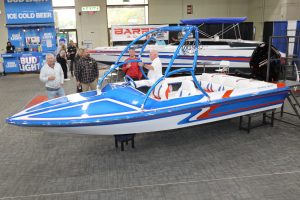 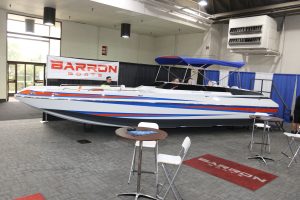 Other notables that are displaying at the show this year are Eddie Marine of Rancho Cucamonga with their custom line of boat accessories and parts; Caliber 1 that brought their 230 Velocity; Howard Boats; Essex Boats (who has returned to the show after a long hiatus); popular online boating website River Dave’s Place – despite being an L.A. Boat Show regular, by way of his annual Boat Show reports posted to his site, 2020 is Dave Johnson’s first time displaying as an exhibitor at the show.

The Los Angeles Boat Show continues today through Sunday evening, with tickets available at the ticket booth for $15.00 each (military discount of $5.00 with ID) and free admittance for children under 12. The Pomona Fairplex is located at 1101 W. McKinley Ave., Pomona, CA 91768.