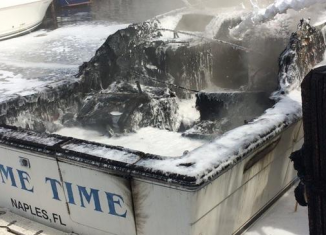 A 60-year-old man received second-degree burns from his head to his toes after an explosion and fire aboard a boat Wednesday on the east side of Pompano Beach, a city official said.

The blaze burned the man, a boat mechanic, who was working on a 30-foot-long cabin cruiser called “Prime Time.” It was docked in a canal behind a house in the 1000 block of Northeast 26th Ave.

Pompano Beach Fire Rescue took the injured man to Broward Health North in Deerfield Beach, said Sandra King, spokeswoman for the fire department. By early evening there were plans to move him to the burn unit at the Ryder Trauma Center in Miami, she said.

Firefighters found heavy smoke and flames on the pleasure craft when they responded at 3:18 p.m., King said. White foam used to extinguish the fire also floated on the surface of the waterway, where other boats were docked.

(Read the rest of the article from the Sun Sentinel here)