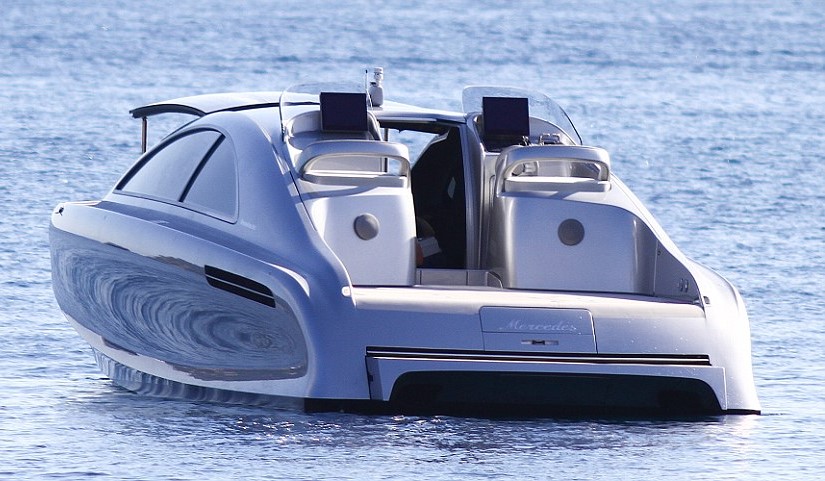 This weekend, along the coast off Saint-Jean-Cap-Ferrat in the French Riviera, the Mercedes Benz Arrow Granturismo made itself known to the public in typical Mercedes fashion. Turning heads and assuredly a lot of pointing heralded the first views of the almost 47-foot, $1.7 million yacht. The vessel is nicknamed the “Silver Arrow of the Seas” and it represents all that Mercedes-Benz is. Luxury. Style. Pleasure.

Taking its design and inspiration from Mercedes-Benz cars dating back to the 1930’s, the original plans for the craft were unveiled at the Monaco Yacht show in 2012 with its official debut set for the spring of this year.

Tackling the project with UK-based boat building company, Silver Arrows Marine, they began sea trials of the bodywork as early as 2012 and originally planned to have the boats for sale by September of 2013. But it looks like the vessel is finally ready now.

She has room for 10 and can reach cruising speeds of up to 30 knots which is made possible be her pair of Yanmar Diesel engines putting out about 480 horsepower each. The interior features nubuck leather and eucalyptus wood paneling. Better yet, the windows will automatically tint and adjust to the sunlight. It will also feature luxurious features like a wine cellar and premium audio system.

In early descriptions of the project, the company has stated on its website: ‘The Mercedes-Benz motor yacht represents the next stage in Daimler’s vision of all-encompassing mobility – embracing everything that the three-pointed star stands for on land, in the air, and on the sea.’

Thinking about getting one? Well there’s a catch. They are only producing 10 boats for edition 1, and only one person per country can buy the boat.

Speaking to the magazine, Ron Gibbs, Silver Arrows Marine Chairman said: ‘By ensuring that the yachts all go to different countries we can guarantee that just one individual in each country will be able to say: “I am the first captain of the first Silver Arrow of the seas”.
‘We are already in discussions with potential owners and reservations are now being taken on a first­-come, first­-served basis.’

Pershing 64 (Ticun) Stands Out Even in Miami