Sponsored by Progressive Insurance, the 2019 Miami International Boat Show boasted almost 1,400 boats spread out across Miami Marine Stadium Park, including numerous musclecraft—some returning favorites, and others that made their debut at the show. There were also many new product introductions in the engine and accessory categories. Powerboat Nation collected several of the new boats and products that helped make this installment of the show a must-see for power junkies.

Unveiled at this display was the brand-new Wright Performance 420 catamaran that Powerboat Nation has been covering in recent weeks. The 420 is the second collaboration between Performance Boat Center and Doug Wright Designs, following the popular 360 (which showgoers could see at PBC’s on-water display). The 420 is 11 percent bigger in all aspects than the 360, with the exception of the tunnel. It was powered by twin 400R outboards.

Fountains and Donzis took center stage at the Iconic Marine booth. Donzi debuted its new Icon 44, a catamaran pushed by quad Mercury Racing 400R outboards. Iconic worked double-time to get the boat ready in time for the show, and is still fine-tuning the setup. But the white and black “first out of the mold” truly captivated attendees. “We’re more interested in producing a good-handling boat than trying to squeeze every last mph out of the hull,”  said Billy Moore of Iconic. The Icon 44 features an innovative windshield shape that gives passengers an unblocked point of view. “Some people are going to love it, and some are going to hate it,” Moore said. We loved it. 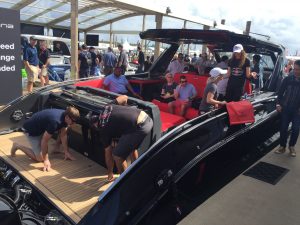 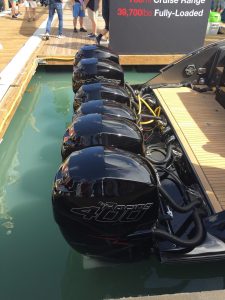 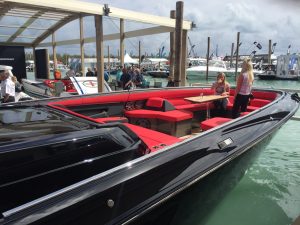 While it’s not exactly the fastest boat on the water, another exciting debut was Cigarette’s gorgeous (and gigantic) 59-foot Tirranna, a boat so big that it requires six Mercury Racing 400Rs to reach a top speed of 72 mph. A black hull with a bright red interior, this luxury sport yacht seemed to go on for miles, making it virtually impossible to photograph in its entirety. It’s a very roomy and immaculately crafted piece that company president Skip Braver said was two years in development and was an entirely new concept in boating. “It’s not a yacht, and it’s not a center console,” he told Powerboat Nation. “It’s a Tirranna.”

As reported earlier on Powerboat Nation, Mercury Marine gave the industry its first look at a new outboard engine: the 400 Verado, which builds on the success and popularity of Mercury’s 350-hp Verado outboard engine. An additional 50 hp has been coaxed out of the supercharged 2.4-liter, in-line six-cylinder powerhead; it’s said to offer superior lightweight reliability and durability, and share many features with the Mercury Racing 400hp outboard. On the Mercury Racing side, the company unveiled its 1,100hp Competition 9.0-liter twin-turbocharged engine that will be the exclusive power for Powerboat P1’s offshore racing series. Its Quad Cam Four Valve (QC4V) valvetrain allows the engine to produce 1,100 horsepower at 6,500 rpm on 89-octane pump fuel. 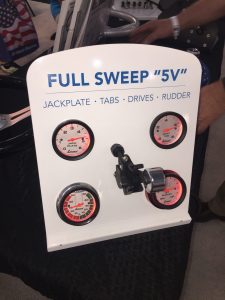 Other equipment seen for the first time in Miami: Livorsi Marine’s “Full Sweep” 5-volt gauges for position and pressure applications (indication for rudder, trim, trim tab, jackplate, jet pump bucket, throttle position, throttle percent, etc.). Livorsi also showed off its brand-new 1025 Trim Tab, offset for triple and quad engines—the cylinder is not in the middle, but off to one side. The tab features a severe cut to clear the outboard engine’s props and cooling systems, so it won’t interfere with aeration, and will actually maximize water cooling, on triple and quad engines.