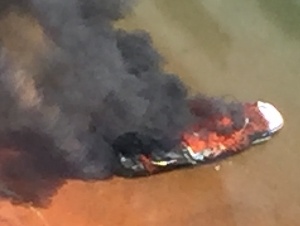 A fiery boat explosion this Sunday on Lake Hartwell, Georgia, resulted in all five passengers being blown overboard and suffering mild to sever burns.

According to the 911 call that came in, the explosion occurred only shortly after the family had put the boat in the water. A witness said that the water near the ramp was only a couple feet deep and while the 4 adults were blown off into the water, the toddler was thrown onto a nearby cushion with undoubtedly saved his life.

All five passengers were burned and transported by ambulance to the hospital expect for the pregnant woman who was airlifted to the Augusta Burn Center.

Georgia DNR, South Carolina DNR, Hart County EMS and Hart County Fire Department all worked together on the rescue which made the difference between life and death for several of the passengers since the fast and big response was able to get each victim extremely fast medical care.

Nathanael Downs, who was on board the boat with his family, said, “The Lord really has blessed us. The first responders did a phenomenal job. We’re definitely grateful for them. By the time I got to shore with my son and my wife, Life Flight was already overhead”

Downs hopes that his wife and son will be released from the hospital as early as Tuesday. We do not have any more details on the other survivors.

The reason for the explosion and fire are still being investigated.