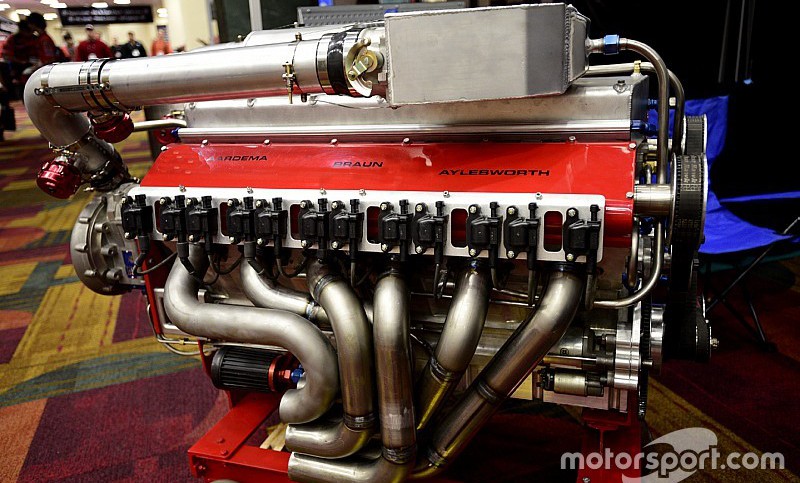 Pete Aardema and Kevin Braun have a knack for turning the weak into the strong. Known best for breaking land-speed world records with their monstrous engine builds, the duo decided last year to begin work on a prototype for the performance boat racing industry. Specifically the Unlimited Hydroplane Boat Racing sector.

The V1200 design they came up with is made to replace the Allison engines and turbines normally associated with hydroplane racing. “Those (Allison) engines are all used up and the people that have them won’t let them go. They’re hoarding them,” Aardema explained. Once the Allison engines disappeared from the hydroplane marketplace, turbines took over but those, he said, “are super expensive because they’re also being used in the oil fields as generators. For that reason the turbines are expensive.”

Their prototype is a 1,200 cubic inch V-12 monster. The pair fabricated four separate cylinder heads with three valves per cylinder, coupled with two Vortex belt driven superchargers and two inter-coolers. At the end of the day the powerhouse provides approximately 15 pounds of boost which translates to 3,000 horsepower, all while weighing close to 800 pounds less than your typical turbine engine.

The engine has an aluminum block and billet aluminum heads. The block is fabricated at their workshop, Mig-welded, heat-treated and then machined. “It’s about 1/2-inch to one-inch material,” Aardema said. Due to its unique size and corresponding displacement, their creation places them closer to an Allison engine than anything currently being produced.

They hope to finish assembly and get it running by May or June just in time for boating season. After a hopefully successful trip to the dyno, the next step is going to be to put it in a bout and get to racing it. Based on their past successes, it’s not hard to imagine the positive impact this could have on the future of powerboating.

Specifications and Commentary courtesy of Motorsports.com