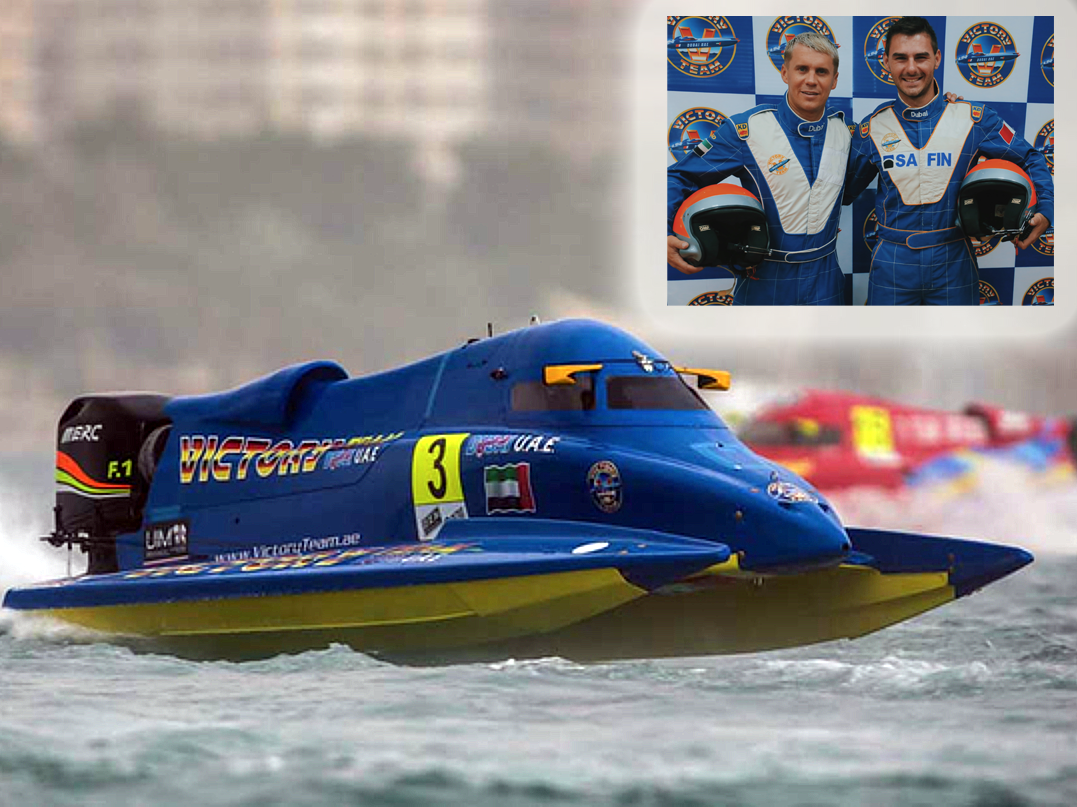 Dubai’s Victory Team, a major player in the world’s offshore racing circuit, is planning to mount a renewed challenge on the F1 competition schedule with a brand-new duo of drivers participating in a Chinese double-header competition.

Headed by Chairman Huraiz Bin Huraiz, the Victory Team’s Board of Directors have paved the way for Erik Stark and David Del Pin to race during the multiple world championships for the remainder of the F1 powerboating season, starting with Round 4 of the world championships in Xiamen, China in October. The double-header—the Grand Prix of Xiamen and Grand Prix of China—will be held from Oct. 18-20.

The two new drivers will replace Italy’s Alex Carella and Emirati Ahmed Al Hameli in the two Victory boats for the remaining three rounds of the F1H2O Championships. The next assignment for the F1 boats will be in Xiamen at the Grand Prix of Xiamen and the Grand Prix of China from Oct. 18-20, followed by the season finale at the Grand Prix of Sharjah from Dec. 18-21.

Heading into the second half of the season, there is a keen tussle for the drivers’ world crown with Team Abu Dhabi’s defending world champion Shaun Torrente and Team Amaravati’s Jonas Andersson with one win each.

The duo is separated by a mere three points with the American having 35 points followed by Andersson in second with 32, while Team Abu Dhabi’s second driver Thani Al Qamzi is third overall with 27 points.

The 28-year-old Stark is no novice on the watersport scene having started his career at the age of 12 in the Swedish S-250 class, after which he went on to win the F2 World title on four occasions. Racing for Maverick Team, Stark eased into the F1 category while making his debut in 2012. His first podium place came in China in 2014 and followed this up with another two podiums in 2015.

Del Pin also comes into the F1 world with loads of experience, having been associated with various watersports over the past few years. The Italian has won World Championships in the F1000 class in 2008 and 2010, while also briefly racing for Team Abu Dhabi. He also raced in the UIM F2 Championship in 2017 with his own team, and took the third spot at the European Championships held in Kupiskis, Lithuania.

“It’s going to be a huge challenge for Victory now onwards,” Bin Huraiz said. “But in Erik and David we have a fine combination of ambition, experience and the will to succeed. I am surely looking forward to some exciting results for Victory Team in the near future.”

Located on the southeast coast of China, Xiamen is a tourist city of Fujian Province famous for its attractive seascape housing a circuit of 2,516 metres along the wide gulf with deep water. The city mainly consists of Xiamen Island, Gulangyu Island, the north bank area of the Jiulong River and Tong’an County connected with the mainland by the Gaoji Seawall and Xiamen Bridge.