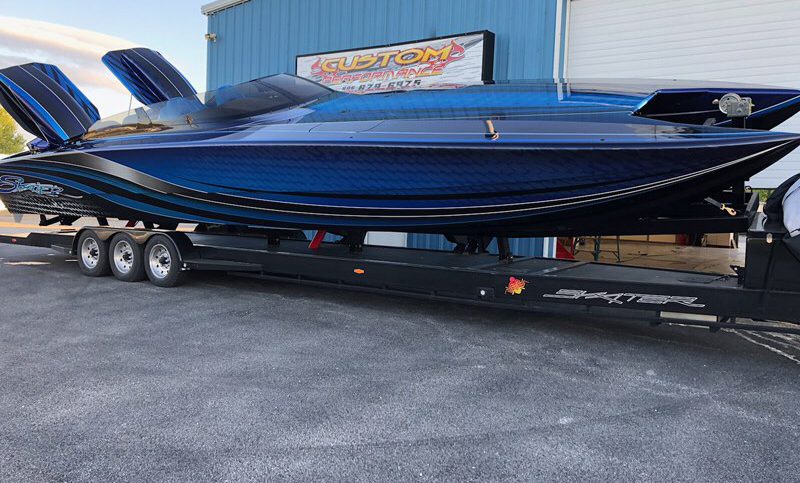 The “388 Platinum Series” from SKATER POWERBOATS was a vision originated by Bill Pyburn Jr,  where the culmination of extreme limitless personalization of an object by a manufacturer to deliver the ultimate product is not a new idea.  These ideas of extreme can be found in the likes of the finest of automobiles from Bugatti, Ferrari, and Lamborghini, as well as the customization shops the likes of  Fosse,West Coast Customs, Carlex Designs and surely many others.  The overall goal was to go beyond what was readily available and partner with a builder to bring the ultimate performance powerboats with a level of luxury and performance that was unparalleled.

The hugely popular and race course dominant 388 catamaran from SKATER of Douglas, Michigan has become a cult hero. The boat is recognized in the same way a super hero, a legend or anything that stirred the emotions and commanded respect and admiration. The “Platinum Series”  is what the fans and enthusiasts consider the ultimate level of refinement and performance.  When David Branton of Covington, Louisiana first laid eyes on the original 388 Platinum Skater of Bill Pyburn Jr. he was looking down at it from his luxurious 52′ RIVA.  David told us “I just had never seen anything like it in the High Performance world of Powerboating. The luxury and refinement is second to none.  This coming from a guy who is not a newbie to the powerboating world.  David has owned over a dozen boats and four of them were SKATERS as he has always been in awe of how you as the customer have the ability to completely customize the boats total design.

Sure the boats are exquisite in design but don’t think for a minute the amazing 1950 horsepower Goodwin Competition Engines that were new to the world of powerboating at the commencement of the first boat didn’t raise the awareness and spark fascination with David. He was literally on the dock when Bill Pyburn  Jr. moored up and the discussion took off and centered around if they built another one how could they build it even better.  Bill’s response was simple “I’m not sure you could make it better as there’s just nothing equivalent except the other Platinums in development. But you could make yet another unique version.”  Bill Pointed out that taking the existing new platinum design that they could yet evolve some more aerodynamics into the boat by slightly reshaping the deck and hatches as well as rake the windshield back slightly. They could also alter the transom angle to better accommodate the return to Mercury SSM6 outdrives that just seem difficult to improve upon.

David said his fleet of high performance boats were known for their “VooDoo” names and would Bill consider taking on and assisting him through the development of yet the next “Platinum Skater” and that became the plan. The discussion started about the  colors and graphic design and they would again lean on the industry’s famed Dean Loucks from The Art of Design to craft this next piece of art. With Red/black as well as White/black Platinums already on the water it seemed a perfect fit for a Blue/Black version.

Bill said the biggest advantage of this boat as well as those to follow receive, is the hundreds of hours of testing and development into the refinements of the boats power train. “We broke new ground when we brought 1950HP pleasure boat engines to this market place. The boats had never had to support such giant power and there was an unimaginable amount of time and changes required to provide the necessary fuel and water requirements to feed these huge engines.  The engines developer and manufacturer Goodwin Competition relied a lot on in water testing  data as they devoted a whole division of their race engine facility to re-create the needs of the boat.

In the end what was delivered has proven to be a bullet proof performer with unmatched power on pump gas while providing an engine that idles and shifts around  the docks like a kitten and brings on a top performance level of a performance level like a den of lions.