When Jeff Tibbe member of the West Michigan Offshore board came up with the slogan “Driven Forward By Our Passion… Fueled By Giving Back…, he had no idea of the kind hearted spirit of it’s members.  He and the rest of the club soon found out.

“We have a great group of boating enthusiasts in West Michigan”, commented Business Manager Roger Zuidema of WMO. “But we didn’t understand the number of passionate boaters and the extent of their graciousness and kindness.”

With strong memberships numbers in 2016 and the support of kind hearted people, Chris Dekker, Board President, presented a $6,000.00 donation to the Make-A-Wish Foundation on April 16 at Boatwerks in Holland, MI.  The money will be used to grant a wish for a deserving child and family struggling through with a life-threatening illness.“We are grateful to our members and humbled by the support received,” said Chris.

With 7 WMO events planned in the summer of 2016, West Michigan will be full of boating action, including The Chase Charity Powerboat Event in Muskegon, June 17-19, and the Rock the Coast Run in Grand Haven, July 23, and the cross-Lake Michigan to Wisconsin run, Coast To Coast Run, August 12-14.  The summer will be exciting as boat enthusiasts are driven forward with passion.  Derek Powers, WMO Board member, put it this way. “If you haven’t been to Michigan is the summer, you’re missing some spectacular scenery, great fun and awesome people.  Make plans to join us.” 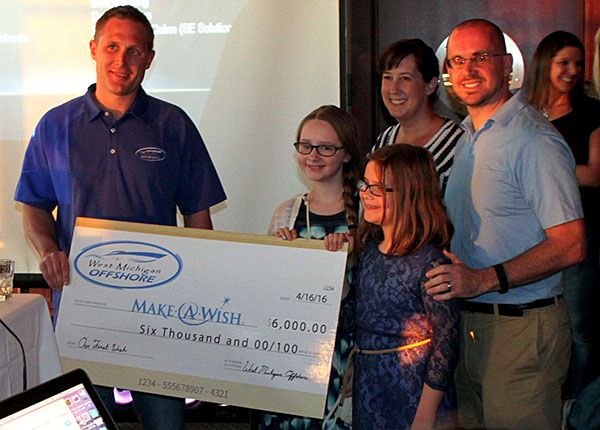