Coil and Williams both work at the world-renowned Performance Boat Center dealership and service center based at the Lake of the Ozarks, MO, the company that co-designed the Wright Performance hull. One 360 with 450Rs was being delivered to a local customer, while the other (powered by 400s) was at the shop as a trade-in for a boat with 450s.

“It was sunny and 65 degrees here last Friday, and we didn’t want to be in the office,” deadpans PB Center co-owner Brett Manire. “So we took the boats out because we wanted to see what the differences were. We tell people at boat shows and poker runs what we think the differences are, but until now we’ve never had two boats with the same props, in the same water, on the same day, with the same fuel. It was like a real drag race.”

On the day of the test, Myrick got behind the wheel in the 450R WP360, while his co-worker and co-pilot Williams climbed in the 400R WP360. We asked each man for what happened next. 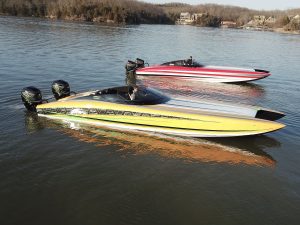 MYRICK COIL: Both boats have similar top speeds. Because of the rev limiters, the 450s gave us a 126 mph top end. Using the same 15”x34”-pitch propellers, the stock 400s yielded 122-123 mph. So, we saw a couple more mph out of the 450s, using an “apples to apples” comparison. On the acceleration side, starting at about a 40-mph roll and going for about a mile, the 450 was about 2 and a half seconds quicker. Rusty and I were in communication the whole time, and he kept saying that I was going approximately 7 mph faster. So, when I was going 90 mph, he would have been going about 83 mph. By the time I got to around 125, he was at around 117 mph.

Our WP420 model requires the 450s, and one interesting development is that we did achieve 120 mph in the WP420 the other day, using the same 15”x34”-pitch Mercury cleavers as the 360. That was in optimum conditions with 60 gallons of fuel and two guys in the boat.

RUSTY WILLIAMS: I had run both of these boats before. I didn’t know exactly how much better the 450 boat accelerated. When you’re in the boat, you can definitely feel that it accelerates quite a bit more. Ever since the 450R boats came out, we had been talking about doing a test like this, and we just had a great opportunity the other day, when the weather was beautiful and we had the two boats at the shop with the same stock Mercury props. Normally, with the 450Rs, we would go with a larger prop, but we wanted the same setup on both boats.

So we did one practice run, followed by some shootout-style passes. That’s when you’re starting at 40 mph. We were perfectly next to each other, with both of our phones on speaker. Brett Manire and Mark Waddington were floating in the main channel in their Sea Ray and we made the passes by them, running up lake and down lake. Then, from about 40 mph, with the trim up, we both just floored it. From that time, and for about a mile, Myrick in the 450 boat was pulling away the whole time. Within a half a mile, he was 6-7 mph faster than I was. Eventually he was going 123 and I was going 117. It was pretty cool.

(It should be noted that since the 450s have come out, everybody who has ordered a WP360 from PB Center has opted for 450R power.)