Home Powerboating News AEM Wants to Save Your Engine. Do You? 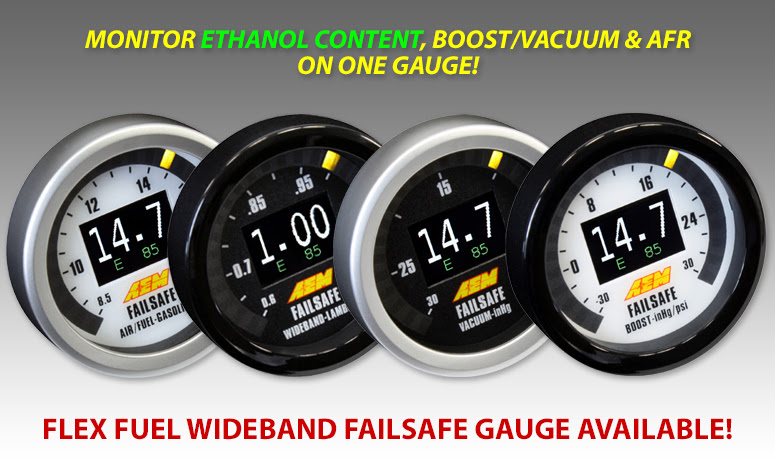 AEM’s latest release product offering just might save you an engine or two over the course of your boating career. They have just released their Flex Fuel Wideband FAILSAFE Gauges, designed to not only display Air/Fuel Ratio, Boost/Vacuum, and ethanol content, but to also actively protect your engine from any and all damage in the event that it runs lean or excessively rich.

The gauge includes a low side output that triggers a failsafe strategy in the even that the AFR falls outside of your desired operating window. Anyone that uses ethanol based fuels knows how imperative it is to keep the AFR within healthy parameters to keep your engine running at peak performance, and this latest release from AEM give you that much more of an operating cushion.

Read the full details below from AEM’s Official Press Release.

The  2-1/16” Flex Fuel Wideband FAILSAFE Gauge includes a Bosch 4.2LSU AFR wideband sensor for monitoring and feedback of AFR, and an on-board boost sensor to read vacuum or boost pressures up to 29 PSI. It is available with or without an ethanol content sensor for users who may already have one (PN 30-4910 no sensor, PN 30-4911 includes sensor). An internal data logger is included to capture approximately 2.5 hours of data on a loop, and includes two analog outputs for logging AFR, Boost/Vacuum and any triggered alarms.

The gauge also includes a low side output for triggering a failsafe strategy in the event AFR falls outside of the operating window (see example strategies, below).This product is a must have for all tuned performance engines who use Ethanol-based fuels like E85, either forced induction or naturally aspirated. Any high performance vehicle owners who want an accurate AFR tuning tool with integrated logging and the ability save an engine from catastrophic failure will want the Flex Fuel Wideband FAILSAFE device.

VIBRANT Organic LED DISPLAY
AEM’s Flex Fuel Wideband FAILSAFE Gauge’s feature a vibrant Organic LED (OLED) center readout that can be user-programmed to display AFR/Lambda and Ethanol Content, Boost/Vacuum and Ethanol Content, or a single input of either AFR/Lambda or Boost/Vacuum. The 24 sweeping outer LED ‘needles’ can be programmed to display AFR or Boost/Vacuum, and corresponding faceplates are included for matching the inputs to the proper display layout. A silver bezel is also included to further customize the look of the gauge face.

WHAT IT DOES
After the engine is tuned and a safe operating window of AFR is established, the Flex Fuel Wideband FAILSAFE Gauge continuously monitors AFR/Lambda and Boost/Vacuum to make sure that AFRs do not fall out of a user defined operating window. If it detects an out of range AFR reading, the gauge triggers a low side output (ground signal with a 1.5 amp draw max) that can save your engine from catastrophic damage (see example strategies, below).

EASY TO SET UP The gauge’s intuitive software makes set up and configuring the low side output a snap. Setting AFR boundary limits, creating a user-adjustable time delay strategy to prevent false alarms, customizing the gauge lighting to flash and alert the driver if an alarm is triggered and configuring the LED displays are all performed using the software via a USB connection.

EXAMPLE ENGINE PROTECTION STRATEGIES
NATURALLY ASPIRATED, TURBOCHARGED OR SUPERCHARGED WITH STAND ALONE EMS OR PIGGYBACK CONTROLLER: Can use the low side output to cut revs, retard timing, trigger a separate fuel or ignition map and activate an ancillary warning light. Users with turbos can also trigger the device to cut boost (may require separate solenoid). The aforementioned strategies are provided as an example. Available failsafe strategies will ultimately be dependent on the capability of the EMS or piggyback engine controller.

WHY USE A WIDEBAND AIR/FUEL CONTROLLER?
Accurate AFR data is critical when tuning an engine. Running rich (very low air/fuel ratio, excessive fuel) can cause a loss in power and fuel economy, while running too lean (very high air/fuel ratio, not enough fuel) may result in serious engine damage. Using a wideband air/fuel controller during the tuning process allows you to monitor AFR and adjust tuning parameters to optimize them for maximum power and efficiency.