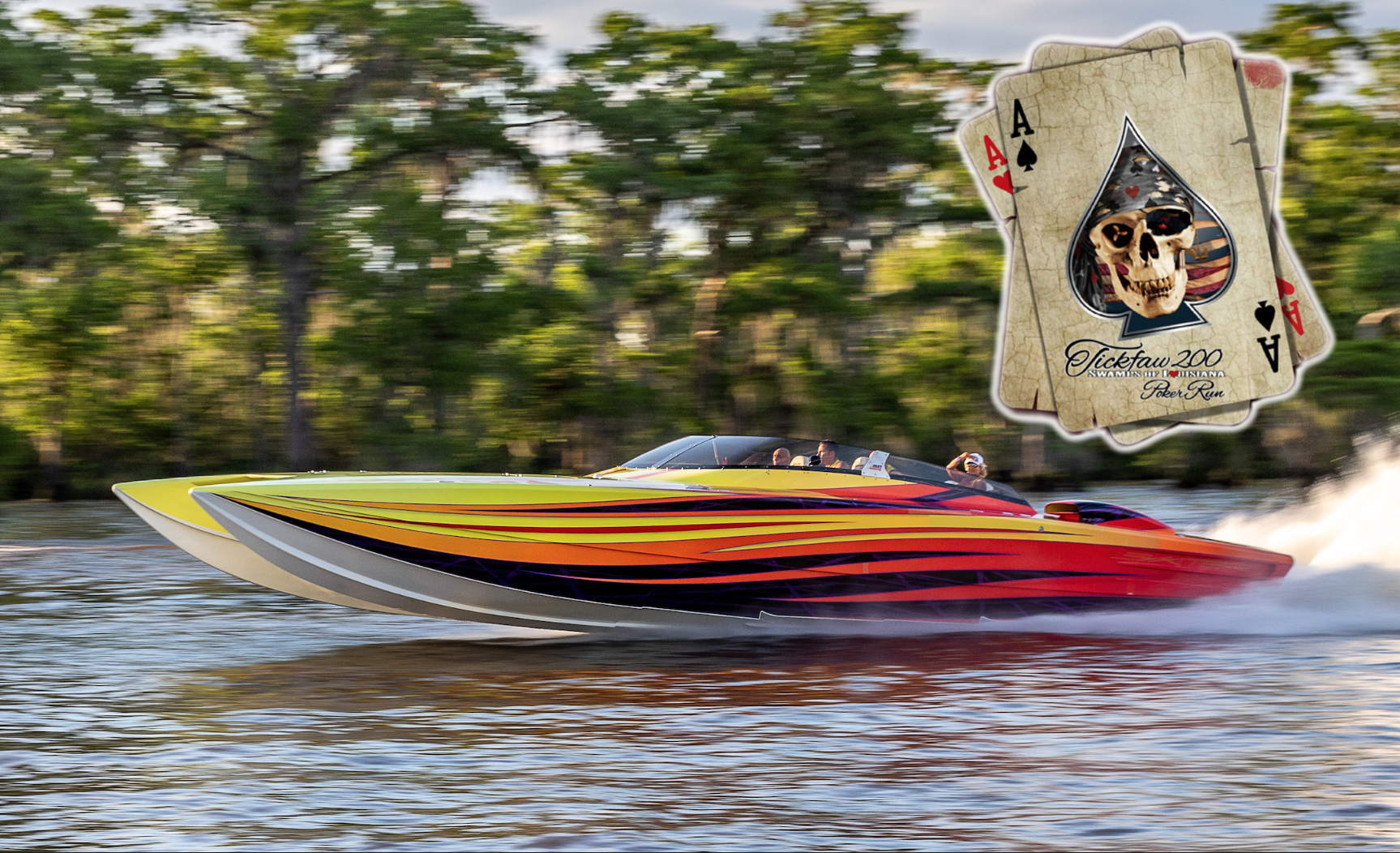 Although the Tickfaw 200 doesn’t officially kick off until Wednesday, May 1, participating boats are already showing up at Louisiana’s Blood River Landing Marina, according to event co-organizer Casey Harrison. The event’s official headquarters is expecting hundreds of Tickfaw regulars to descend on Springfield, LA, in the coming hours to become part of Louisiana’s largest powerboat poker run (May 1-4). Lake Havasu’s Desert Storm may have powered down this past weekend, but some of the same participants in Arizona are planning to head from the desert to the bayou for a poker-run “twofer.”

Thanks to the efforts of Harrison and marina owner Joey Fontenot—as well as the invaluable assistance of their friends, families, volunteers, employees and local agencies—this sleepy marina transforms into one of the most exciting poker runs in the country.

This year, for the first time, the Tickfaw 200 will extend its run into Mississippi and add an extra day (Wednesday) to the itinerary. The idea to include a stop in Mississippi has been kicked around for a while, but it’s finally happening for 2019. In addition, the poker run will be adding Shaggy’s Pass Harbor, home of the original Shaggy’s restaurant in scenic Pass Christian Harbor, as a stop. The bonus miles will render the name “Tickfaw 200” as antiquated as the store 7-11, as the poker run’s monicker was a tribute to its scenic 200-mile length. This year’s course will total 280 miles.

Another highlight of this year’s Tickfaw event will be the epic Powerboat Nation Party on Friday, May 3, at the Poker Run stop of Rum Buoys in Amant, LA. Speedboat Magazine’s editors will be on the scene, covering the entire event for its June 2019 issue.

The Tickfaw 200 draws numerous high-profile participants; this year, Jim Lee, Kenny Armstrong, John Woodruff and Todd Campbell are expected to attend, according to Harrison. “We actually have a significant amount of boats coming from California this year,” he adds, including a number of DCB owners.

Live entertainment is also a major draw of Tickfaw. “We’ll have bands performing Wednesday through Friday night in the Fun House bar, as well as live bands in Madisonville on Saturday, which will be nice.” Harrison says he’s excited about the event’s “chicken drop” game, in which attendees wager on which squares are “fouled” by the fowl.

In addition to Shaggy’s Pass Harbor, poker-hand stops will also include:

The YNOT Dock is another new stop for Tickfaw; it offers a protected harbor and a live band. “That’s a pretty cool place,” Harrison says.

The Tickfaw 200 is on a short list of the top poker runs in the nation, and certainly the very biggest in the state. In southeast Louisiana, the Tickfaw River moves slowly through a vast swamp where the water is dark, and the soft mud grows lush vegetation. A thick forest of tupelo and cypress forms a canopy overhead. Spanish moss hangs down from the branches and entangles spider webs; white egrets and blue herons sit motionless on fallen logs just above the water looking for a meal, while large reptiles and amphibians lurk motionless just under the water. These critters go pretty much undisturbed by outsiders until the first week of May. That’s when the big boats come out to play, and even the gators look for other places to hunt.

A Bit of Event History

Charlie Albert came to the Tickfaw River in 1979, when the only things here were the mosquitoes. He set up a small marina he named Blood River Landing, and didn’t bring much with him except for a reputation for wild times. The boats started coming in the mid 1980s, and that’s when “Crazy Charlie” put on a small event called the River Rat Run. By 1996, Charlie put together a 200-mile course with eight stops for the performance boats, and that was the first year of the Tickfaw 200. Since then, Blood River Landing has been the site of innumerable powerboats that have come to compete in this world-famous party.

Tragedy struck in 2009, when Charlie was killed in a motorcycle accident at age 54. The event was not held that year, and some felt that the event should not continue out of respect to its creator. However, the local community lobbied strongly for it to come back—partly because of the millions of dollars in revenue that the event brings in. Tickfaw has been so popular that each of the fuel stops along the run’s course report that tens of thousands of gallons of fuel are sold during the week.

The Southern Louisiana culture is a key component of this poker run. The food, hospitality and natural scenic beauty of the area are among the best reasons to attend, and important in distinguishing it from other runs. The seafood alone is a huge draw: stops along the run include the opportunity to sample many of the signature savories, including crawfish boils, catfish, gumbo, redfish, grilled oysters, po’ boys and other foods exclusive to the region. The Louisiana locals are unpretentious and straightforward, and their sense of humor is robust and unforgettable. Ask anyone attending this event if hospitality is a reason why they attend this event, and most will rate it the #1 factor for repeat attendance.

Worried about the size of your boat? Relax—this poker run features all types of boats participating, from pontoons to million-dollar catamarans and beyond. Unlike some other runs, the Tickfaw event has a theme of inclusion hospitality; snobbery, arrogance and exclusion are all verboten.