“Here’s the deal,” says Vern Gilbert. “I’ve won them all except this one. And I finally got it.”

Gilbert, the owner of Lake Havasu City, AZ-based West Coast Drives, is referring to his performance at Saturday’s Desert Storm Shootout, which he won in his 1991 40’ Skater known as Predator I driving alongside his longtime customer and friend, Gary Smith. The pair have had repeated success winning shootouts in the Lake of the Ozarks and Texas Outlaw Challenge, but capturing Desert Storm’s coveted King of the Desert title has proved elusive—until now.

“I’ve helped [Chip] Romer, [Don] London and many others win, but I’ve never gotten to do it myself,” he says. “It’s really great that we finally got it.”

Gilbert and Smith were radared on the 3/4-mile course at a blistering 186 mph in the Skater, which is powered by twin Carson Brummett 2,300+ HP engines.

“The first run, we laid down a 179, and then a 186,” Gilbert says. “Running with Gary Smith is fantastic. He’s like my brother.” Gilbert, who turns 70 this year, gives enthusiastic thanks to Smith, as well as to Ignite Racing Fuel, Carson Brummett and Tim Shugrue of Shugrue’s Restaurant in Havasu.

Meanwhile, the 2019 Queen of the Desert title went to Miranda Jones, driver of another 40’ Skater with Brummett-built engines (blown 1,350 Sterlings with 13.5 pounds of boost). Miranda and her husband Tim Jones are owners of a previous Skater, but Miranda had never even driven the new 40’ prior to the 2019 Shootout. Not only that, but this was her first time driving in the Shootout. And to make things even more challenging, both gas tanks were full—most shootout participants opt for a lighter load—and mechanical gremlins, including a problem with the rig’s harmonic balancer, threatened to put the kibosh on the Jones run entirely.

Miranda made five passes, and got a top speed of 128 mph.

“We definitely had a few faux pas going on,” she admits, “but A.J. (Adrian Barrett) at Barrett Custom Marine saved us. He basically worked all night and got us up and running, because this was something I really wanted to do. And it ended being a tremendous amount of fun. I just wanted to be on the board. We had a great time.”

The Joneses live in Fresno and have a place in Havasu as well. Miranda is the CFO of the Valley Development Co., while Tim is an attorney and land developer. 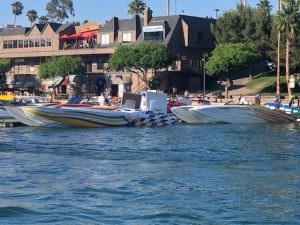 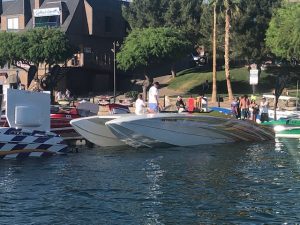 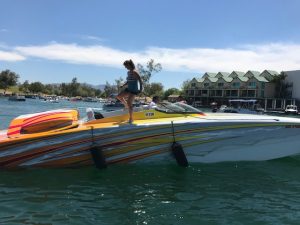 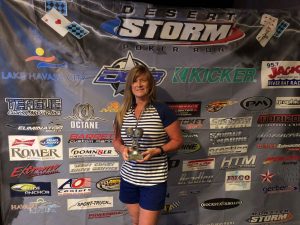 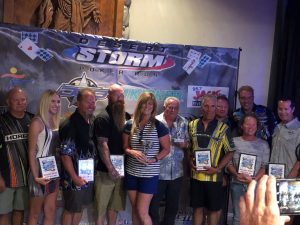