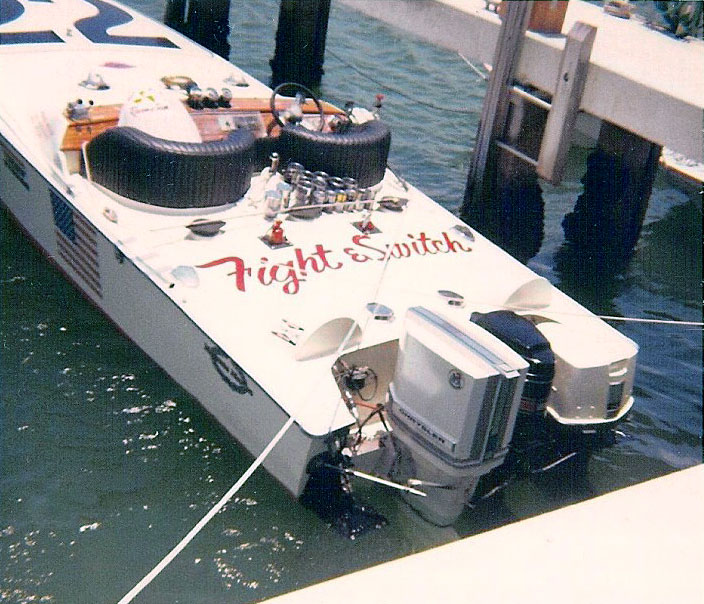 Howard Weiler was born in Cincinnati, Ohio at an early age. Cincinnati is just across the river from Covington, Kentucky, a very strange town. My uncle, Ralph Reynolds, lived there all his life, and he wasn’t your average bear. For one, he cemented over his yard, and painted it green, in order to avoid mowing. At one family holiday gathering, while carving the roast beef, he roared at my aunt Dorothy, “Goddamit, Dorothy, I’ve seen cows burned worse than this GET UP!” Ralph was a Postal train rider, whose job it was to supervise a couple of other Postal train riders who dutifully rode trains from Cincinnati to wherever and back. In fact, it was a marathon gin rummy game (with the gin part being actual gin). When he was finally forced to retire, he died.

It occurs to me that Weiler may have had some of that, er, eccentric blood in his veins. He burst onto the Miami, Florida scene in the middle 50’s, and immediately joined the boat business. His arrival coincided with the arrival of fiberglass as the new boat building material of choice, and Weiler started a small fiberglass supply business. He was active in the boating community, joining the Pelican Harbor Yacht Club in its heyday. Sam Griffith was the Commodore of the club, which meant that we did a lot of racing. Fifteen or twenty times a year, the club put on some kind of race. The worlds largest field of racers, 278 boats in one start, took off from Pelican Harbor, bound for West Palm Beach and back one year. It was easy to get caught up in the excitement, and Howard jumped right in. He devised two promotional plans to ingratiate himself with the boat building world. Plan “A” was to race in every outboard race in South Florida, which involved several classes of racing boats. He soon caught the eye of Ralph Evinrude, whose Johnson and Evinrude outboards were competitive in the long distance races. Most of the closed course outboard races were won by Mercury powered craft. Mercury motors won so many races that the founder, Freddie Mercury, retired from engine building and took up music.

In one mad scheme, Howard Weiler and Ed Joyce, another boat nut, agreed to a publicity stunt: To run a Johnson powered outboard boat from Miami to the Chicago Boat Show, via the Hudson river and the Soo Canal system. They ran non-stop, except for stopping, and cruised up the beach all the way to Sandy Hook, New Jersey, where they turned left, toward Chicago. Unbelievably, and I do mean unbelievably, they arrived at the McCormick Place dock without a hair out of place. Howard even had a stint on the TV show, “To Tell The Truth” regarding his run. The down side of that scheme was the fact that one of Howard’s detractors, Mike Green, had a home movie of Howard and Ed on the New York Thruway, with the boat on a trailer, behind their truck heading for Chicago. Oops.

Howard’s wild racing exploits had only a mild beneficial effect on the boat building world, so Howard unveiled (remember that word…) Plan B. Each month, Howard rented a large portion of the Airways motel, brought in copious quantities of adult beverages and excellent finger (remember that word too) food, and about two dozen of the best looking strippers in Miami. In about three months, Howard became “Howie”, and zoomed to the top of the fiberglass resin peddlers in the south. It seemed that the more successful he became, the stranger he got. He built some strange craft for the Miami-Nassau race, always called “Wildcat”, always Johnson powered, and almost always finished the 183 mile run.

In 1967, Sherman “The vermin” F. Red Crise conjured up the Bahamas 500 race. One long day around the Bahamas, with a fuel stop in Nassau. Howard tried conventional boats, with Johnson power, and always finished, but out of the money. At last, he came up with the master stroke. He powered one of his older boats with three different brands of outboard motor. One Chrysler, one Mercury, and one Johnson. We all laughed when he arrived at the dock with the weird setup, and assumed that it was just a practical joke, but, by golly, he showed up at the starting line, and damned if he didn’t finish sixth overall, against 54 entries!

One of my favorite memories of Howard, and maybe the theme of Howard’s eventful life, was the return trip from Nassau, after the 1964 Miami-Nassau race. Bertram boats were still king s**t that year, and they finished 1, 2, 3. Our fledgling Formula race team finished 4th through 11th. After four days of parties in Nassau, we were pretty subdued for the trip home, and the weather had worsened. We were facing 183 miles of sloppy weather, and we packed plenty of beer. We gathered at the Lighthouse at the entrance to Nassau Harbour, and made up a fleet. The group included Howard in an S22 boat, Jim Wynne and me, in Formulas, Carl Moesley and Jeannie in a Sea Craft, Jim Breuil in his Diesel Enterprise, Dick Bertram in his namesake, and a few others.

We bashed our way across the Tongue of the Ocean, to Northwest Light, then had a better ride across the flats to Cat Cay, on the edge of the Gulfstream. We all had some reason to stop at the Cat Cay Club, which allowed transients the use of the Harbour facilities, but we were mostly scum, and not allowed with the white folks… All that changed on this trip. Dick Bertram was member! We all piled into the dining room, probably the motliest crew ever seen by the gentry (Not Tom). We did all sorts of eating and drinking, and when the bill came, it was presented to the Member, Dick Bertram. He took one look at and coughed a couple of times, turned red, then mumbled that he didn’t really invite us, blah, blah, blah. Howard stood up straight, and said “I’ll take that tab, Mr. Bertram.” Dick handed it over. Howard looked at it, turned to Jim Breuil and said, “Jim, loan me $1800.