In the early eighties, I was the cheese at Cougar Maine on fabled 188th Street, North Miami Beach. At that time, most recent high speed boat development had sprung from that womb. We were a division of Cougar Limited, Netley, England, led by James Beard and Clive Curtis. That pair had solved the racing Class One Catamaran problem of weight vs. speed vs. strength, at least for the moment. That caught the eye (and a bob or two) of Ted Toleman, who was a small-potatoes Formula One car owner and test pilot for a number of Scotch whiskey distilleries.

One of the first projects that they gave us was the construction of a 58’ x 22’ aluminum catamaran, to weigh about 28 tons, be shoved by a pair of 1400 HP Stewart and Stevenson V16 Detroit Diesels at 50 knots. It took a couple of years to launch it, and initial tests were dismal. The expected 50 knot speed was, in fact, 33 knots, due to a number of reasons. Number one reason was an Italian named Scaccabarozzi, who was the head Guido at SBM Marine in spaghettiland. We gave him the order for the props before we started construction, and did not receive the props until after completion of the vessel. That would not have been so bad, except that, had it been a school exercise, he would have received an F-. The prepaid props were the wrong pitch, the wrong diameter, the wrong rake, the wrong bore, and the wrong number of blades. Except for that, they were perfect! Clive Curtis (Steve’s Dad) and I took a pair of huge “rosebud” acetylene torches and two sledgehammers and reworked the props the best we could. That helped, but we still couldn’t get the required RPM’s for the speed goal.

I wish I had a good picture of the original configuration of the stern of the boat. It had a “back porch” that covered the surface props, rudders, exhausts, etc. It turned out that the same principle that gives racing cars their downforce, essentially just blocking the air from the front and sides of the vehicle, creates a vacuum that can be in the thousands of pounds of downforce at a couple hundred miles per hour. Well, if an F1 car could get a ton or so of downforce, we had tons and tons. I (who fortunately knew EVERYTHING) made a “fix” by installing a pair of 6” exhaust hoses through the back porch, right above the propellers, to break the suction. Turns out I didn’t know everything. We took the boat out on test, same results. I crawled back into the back porch and was amazed see that the very stiff hoses were sucked flat! I added some plywood forms, and it sucked the hoses closed over the forms. We gave up, hauled the boat, and changed the back end of the boat to allow plenty of air flow. Bingo! 50 knots.

Now that we were big fast catamaran guys, we got a lot of play from various militaries, smugglers, and Richard (Fricking) Branson, who, being unsuccessful at killing himself flying balloons around the stratosphere, decided to try racing across the ocean in a catamaran.

Class act, Mr. Branson. We set out to design, build and test a 67’ catamaran with a pair of big MTU Kraut Diesels. The effort was to be an all-British affair, with the craft built at Cougar’s aluminium (not a misspelling) works, Cunninham’s, in Arundel, down the road from the three car garage headquarters of Cougar Netley. I was allowed to be project engineer for the initial workup. Fun project. None of us know much about it, and the stakes were high. They assembled a crack crew of Brits over there. We compared notes by Telex, as I couldn’t quite understand the jargon, what with all the stiff upper lips and colloquialisms. “Heave on the Forsythe, there!” “Hike the Fenstermocker!”

Somehow, it was coming together. The leader of the program was Steve Ridgway, my General Manager, who spoke the King’s English, and could get along OK in American. I always suspected that he wasn’t full Brit, as he tipped generously. After a couple of months, we had a meeting in England to compare notes with the suppliers, and to see the behind schedule carcass of the TADA! “Virgin Atlantic Challenger”. Steve was socially aware (I wasn’t. Still ain’t), and he made all the arrangements. I met the British crew, and liked them all, immensely. I was explaining what I had learned to the interested parties, and kept getting interrupted by a sailor, who would navigate. I finally said “Sir, have you ever crossed the Atlantic in a powerboat?” He said “Son, I rowed across the fooking Atlantic!” It was Chay Blythe, one of the top round the world sailors. Steve had made arrangements to host lunch at the White Swan Pub, on top of a nob hill in Arundel, in sight of the workshop and the beautiful Arundel Castle. As luck would have it, noon on that particular day was incredibly beautiful. The sun was peeping through the fog, it was warm, and we were to dine outdoors (happens every couple of years or so, in the South of England).

Being socially aware, Steve had arranged the lunch to a T. We had pecking order, Since I was the ranking Cougar exec there, I had to sit next to the Fuhrer of MTU Mercedes Diesel and Panzer company, on whom we were putting the arm for the engines, parts, support and riding mechanic for the crossing. All the other major suppliers were there also. They had pulled three or four tables together, with twenty or so folding chairs. We exchanged pleasantries, I think. We all took a turn at oratory, explained who we were, and why they were lucky to get to finance our project. I made small talk with the Fuhrer “You guys invaded anyone lately?” 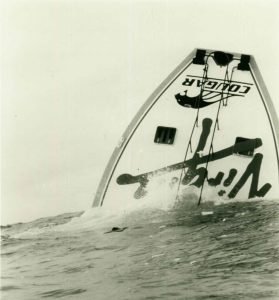 We ordered lunch. I gave the Spotted Dick a pass, for obvious reasons. The Germans orders steaks, “Very vell done!” They still don’t trust the Brits, who didn’t have the courtesy to surrender. We had a couple of warm beers, which loosened up the tension, and lunch was served. Bear in mind, this might have been the first outside lunch at White Swan in memory. The Germans were earnestly sawing on the corpses of their big steaks, and shaking our table. I dropped my napkin, and while retrieving it, noticed that the legs of my neighbor’s chair were penetrating the soft sod. I got Steve’s attention, and motioned with my eyes. Steve’s eyes got wider and wider as the rear legs of the German’s chair wend completely through the sod into the soft earth. He went over backwards, and his toes caught our side of the table, flipping it over on Steve’s group. There’s more.. The big German rolled ass over teakettle to the bottom of the hill, about 25 or 30 feet. He marched back up, diagnosed the problem, moved his chair forward and sat back down. Stony silence around the group. I couldn’t stand the status quo. I drew a big nine on my napkin, and held it up. Brought down the house!

Oh, yeah, the boat sank 116 miles from the finish, and Branson stoles Steve Ridgway to be Chief Executive of Virgin Airways.