Home Brownie's Bites Brownie’s Bites: Hey, Waiter! There is a Lug Nut in my Steak...

My Formula 233 raceboat, “Challenger”, had finished 2nd overall twice, 5th once, and last once in four attempts. I would have done almost anything for an overall victory. In that day, there were only a couple dozen men who had won an offshore race overall. In the fall of 1964, I was about to leave my cushy General Manager job at Challenger Marine in North Miami, Florida, and go to work for upstart boatbuilder Don Aronow at a new company called “Donzi”. Having a few brews one evening at Tony Roma’s, someone mentioned that there was a new, poorly attended, obscure “Offshore” race from New Buffalo, Michigan to Chicago and back. I was planning to take my family on vacation to my ancestral home in Indiana anyway. What a deal! I could sneak up there, win the race overall, pay for my vacation, be hero, etc. What could possibly go wrong? I talked my friend Mike Collins, who worked at Challenger also, into going with us. We set off in my speedy, chrome laden 1958 Oldsmobile station wagon with my family aboard and the Formula behind on a trailer. The Turnpike only went to Yeehaw Junction in ’64, and then it was US 41 the rest of the way. We were in high spirits, with huge expectations and a small bankroll. We didn’t blow the first trailer tire for almost 30 miles. An omen? We drove for what seemed forever, and passing through Farmersburg, Indiana, at midnight. Mike was driving about 70MPH on US 41. The rest of us were snoozing, dreaming of a bed and a hot bath at my Dad’s house, 20 miles further up the road. We crested a small hill on a very straight stretch of 41, and came upon a herd of Black Angus cattle wandering on the highway, directly in our path in the black night. Mike did the most masterful job possible in getting the station wagon through the herd at 70MPH, but the Formula was in a four wheel drift back there, swatting championship prize bulls every which way. 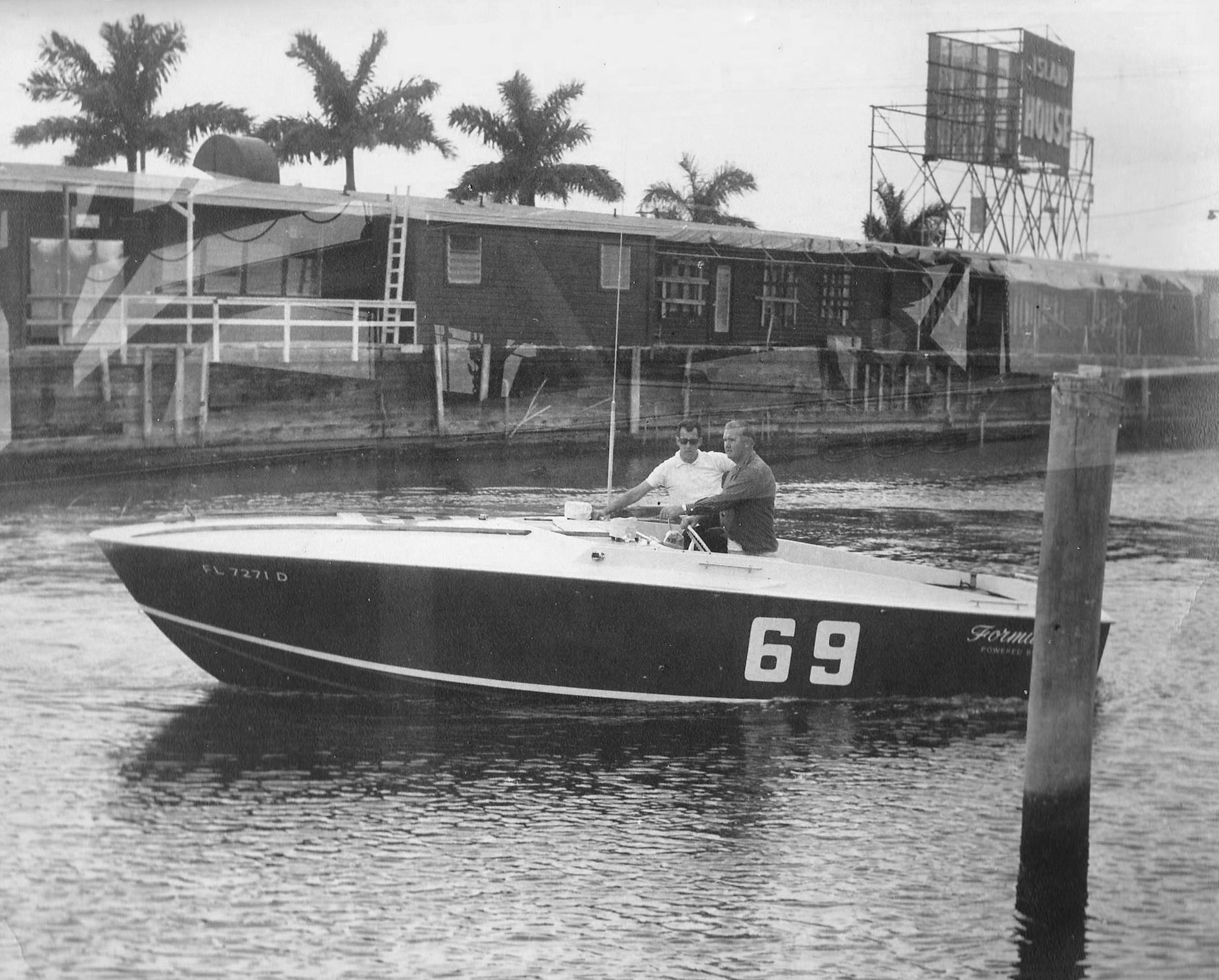 The boat stayed right side up, but all the wheels, axles, light harnesses, etc. were ripped off the trailer and scattered into the blackness. When we skidded to a stop, the light wires shorted out in the car. We were sitting “dead in the water” stretched across US 41 in the blackest of nights. I woke up in the middle of all this, and after I was able to shove my heart back down my throat, I leapt into action. The farmer’s house was nearby. He was still awake, having just come from the Vigo County fair, where his (late) half ton bull had won first prize! Mike ran to the top of the hill with some flares to warn oncoming traffic, and my wife and I grabbed the kids and carried them 100 yards away from the highway. We feared that a speeding semi might come barreling over the hill and finish the job.

The farmer brought out his back-loader tractor set-up, and started hauling away his former prize herd. Some were dead, some injured beyond repair, and some unscathed. He and his family immediately started slaughtering the dead ones, making some extremely crunchy hamburger, one might imagine. We also used the back-loader get our mess off the road. After repairing the wagons electric system, we pressed on to the sanctuary of my childhood home. After some sleep and blessing counting, we returned to the scene of the crime (Literally. Indiana is an ‘open range’ state. Cattle can go anywhere, and always have the right-of-way). We tallied up the damage. Boat and trailer, not too bad! After a few tires, wheels, one axle, lights and such, we were back on the road, less the family and plus my boyhood friend Mo Hart. The Angus group, not so good. I was responsible for the value of all the bovines.

I had been telling Mo what a terrific driver I was, and now it was time to put up or shut up! It was about 200 miles from the house to New Buffalo, and we cruised there in great anticipation and high spirits, drinking beer and telling racing stories. We arrived at dusk, and found an inexpensive motel to crash. There were just a few boats there, nothing that we couldn’t handle, rough or smooth. We slept like babies, with visions of silver cups and money dancing in our heads. After a big breakfast, we drove toward the pits and launching area. New Buffalo is near Dunes State Park, and the topography is very sandy and, well, duney. We drove up the last dune before Lake Michigan, and just as we crested the dune to get a view of the lake, we were sitting beside a never-ending line of trucks and raceboats. It was the entire Mercury Marine offshore racing team. I was sitting window to window with Odell Lewis, who had just won the Miami-Nassau race. Behind him on the trailer was “Mona Lou” a 25’ Bertram with twin racing Mercruiser engines and drives. Probably the fastest offshore boat on the planet. He stuck his head out the window, and yelled “Hey Brown! Some days you eat the bear, and some days it eats you!”