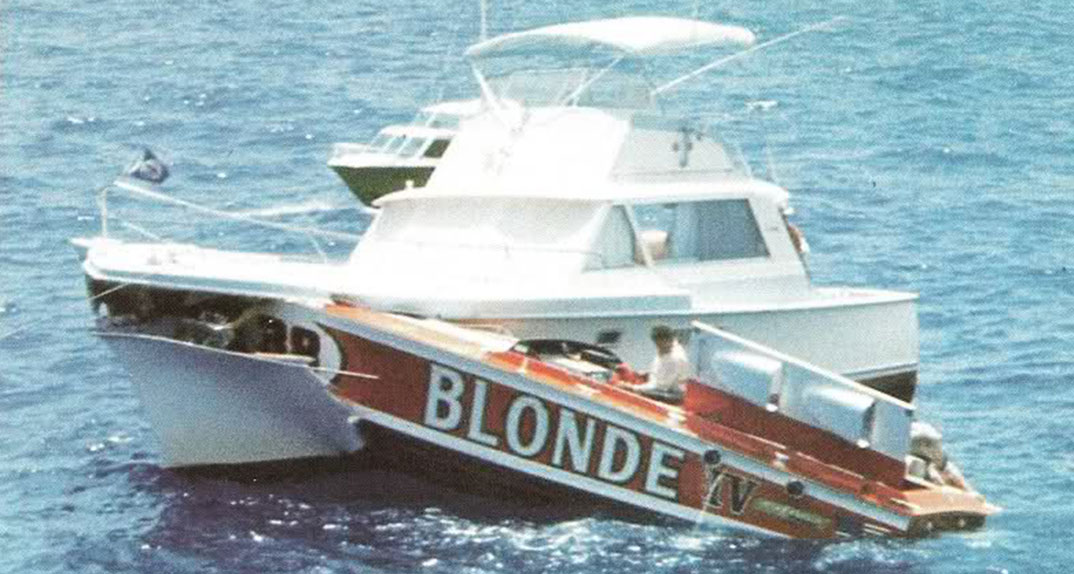 Our local offshore racing club, OPBRA, short for Offshore Power Boat Racing Association, was formed in 1963 as an alternative to the Bahamas Powerboat Group. The Bahamas group was owned and operated by Sherman F. “Red” Crise, a cranky sumbitch who was very successful in sucking money out of the Bahamas Government, and keeping it. We all owe him a big “Huzzah” for starting up international offshore racing in 1956, with the first Miami-Nassau offshore powerboat race. I have always felt that the coincidence of my arrival in South Florida at that exact moment was more than chance, but I haven’t found any evidence to back it up.

The new club was wildly successful. Literally every offshore racing participant in the world was a dues paying member, and we created two new offshore races immediately. First was the Miami to Key West race, always held in November, when the winter winds were usually howling from the north, then the Sam Griffith Memorial race in February for the same reason. We could have used a club psychiatrist to find out why everyone pretended that they enjoyed getting the crap beaten out of themselves on a regular basis. In all fairness, I didn’t see that much leather or whips and chains…..

It turns out that managing a race was a real pain in the ass, and that Red Crise did it because he was being paid copious amounts of Bahamian cheese, which, of course, he stashed, since his races at that time did not pay a cent. We paid him for the privilege. Other venues sprung up around the country and the world, and each one made our club just a bit less important. The new racing groups were as enthusiastic as we once were, and finally, the club just wasn’t viable any more. We even elected Sammy James, a known hoot, as president. Although Sammy was a top guy in everything offshore, he couldn’t seem to re-light the flame either. Sammy and I were having a beer after on OPBRA meeting, and he collared me and said “Brownie, what shall we do? We don’t have a club-managed race anymore. Membership is way off, dues are off. I am at a loss at what to do”. Fortunately, I had been drinking during the entire meeting with David Gillmore, Paul Clauser, Don Pruett, Jake Trotter and Jim Breuil, most of us on the Board of Directors. One of us said “Sammy, how much do we have in the treasury?” “About $3500”. I said, “Screw it, let’s drink it up!” The place brightened up immediately. We built on that terrific idea, and came up with a “Fun Ocean Race” from Miami to Islamorada, with the finish line at the famous “Sunset Inn”. The owners were friends of mine, and my family and I had spent dozens of weekends there, enjoying the Keys. They had a private island there, on the bay, that was to be our party site. Rules for the race were “Run what you brung”, and club membership was required. Entries and new or re-fluffed memberships in the club soared. I do not recall the total number of entries, but do recall that we had 54 finishers, probably still a record for an offshore race.

We took enough booze to the island to knock the hard spots off the entire middle keys. For the first time, I saw Goombay Smashes being prepared in 30 gallon barrels, two of them, stirred by oars. Sammy decorated the men’s room door with an 8 x 10 photo of Don Aronow’s face, just below the word “MEN”. We had prepared 60 or 80 identical trophies, black on mahogany plaques, that said “Miami-Islamorada Powerboat Race. 1969. Winner”. We presented every finisher (and good looking girl) a trophy, except the winner, Billy McDonald, who received nothing.  Billy had driven his 18’ Donzi with Mark “Big Dirty” Raymond. Neither was very adept at navigating, and I suppose they also won the Miami- Lower Matecumbe Race and a few others before they stopped.

One of the entrants was Roger Hanks, in his shiny new Nova 24’ pleasure boat. He never located the starting line, and we didn’t see him again for several weeks. He apparently liked the experience, as he took his Nova to the Offenhauser guys in California and got it all fluffed up. He later bought several 36’ Cigarettes, all named “Blondie”. He introduced tuned, stainless steel exhaust headers and a number of other important improvements to offshore racing in general. He has a permanent place in the colorful history of offshore racing as the guy who stuck his 36’ Cigarette “Blondie”, right through a 41’ Hatteras check boat, apparently knocking a lady right off the John in the forward stateroom.

My entry in the race was new 19’ Nova runabout with a big Chrysler V8 on Vee drive. For crew, I carried my wife, Deanna, famous racing throttleman Harold “Smitty” Smith, Delta Airlines pilot, “Pornographic Bob” Stothard, my dear friend Curt “Redneck” Leggett, and Sandy Chisholm, son of Donzi Marine President, Tim Chisholm. Leggett had brought a big bottle of rum. I was an American Power Boat Association Vice President, and I informed him that we would be disqualified if the rum was found on the boat. We were afraid to throw it overboard, being tree-huggers and all, so we drank it. Sandy was about 16 or 17 years old, and a couple of slammers did him in immediately. Upon our arrival, we had to hide him from his dad, who had ridden down in Jake Trotter and Jim Breuil’s 27’ Magnum. Leggett carried him around like a briefcase, leaving him behind bushes and such, until he sobered up.

The party lasted two days and nights, and near the end, was totally staffed by strangers who had just wandered by. The Lorelei Bar, a couple of blocks down the street, had their worst weekend ever. The OPBRA went into remission, and lasted another 20 years.