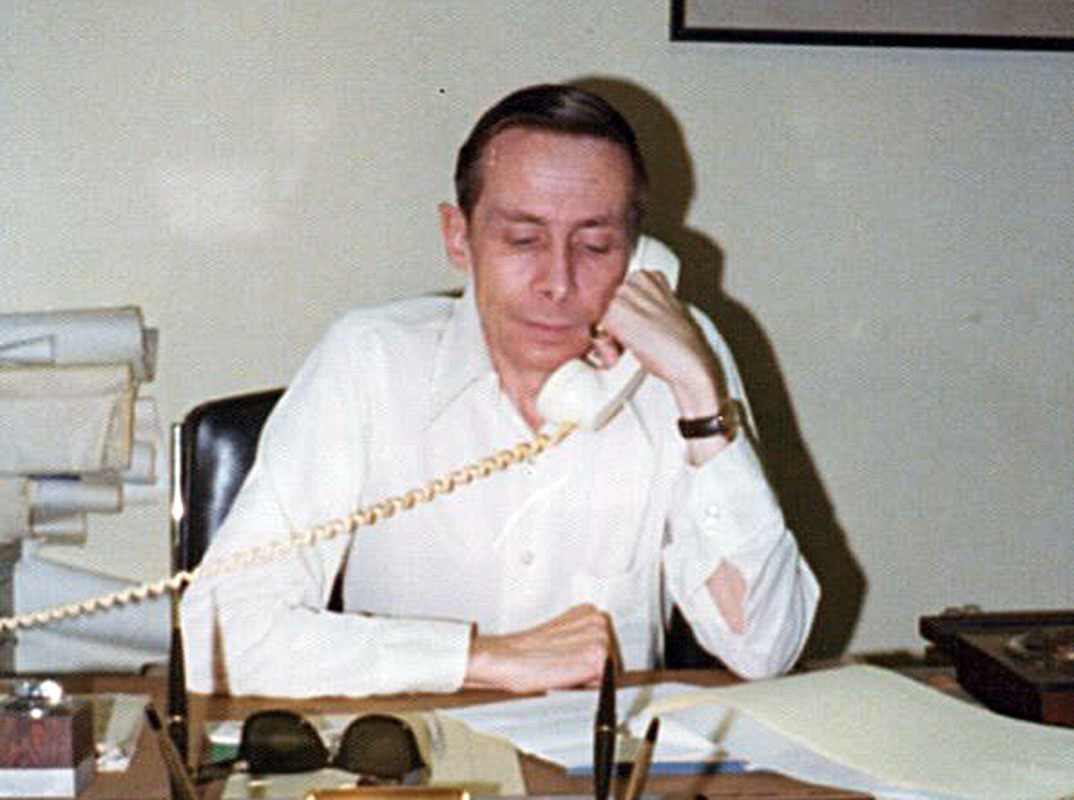 In 1967 at Donzi Marine, we were enjoying the boat business, offshore racing, life in general, and looking forward to a rosy future. We had slipped the surly bonds of Aronow, and now only had to deal with the Teleflex hierarchy. Teleflex had purchased Donzi Marine from Don Aronow, its founder, in April, 1965. Teleflex, Inc. was a U.S company, mostly Canadian owned, that operated aerospace, medical and marine products companies, always profitable, always growing, and well run. The Chairman of the Board was one of my favorite characters, Tim Chisholm, who hardly weighed 100 pounds, had emphysema, but had a genius IQ, and the heart of a lion. Tim had a difficult entry into the boat building business, having been “bent over” mightily by Don Aronow on the purchase of Donzi. Tim was an excellent manager, and after having seen the likes of me, Jake Trotter, Gene Schoell (Harry’s brother), Bill “Cement Head” Melody, Mark “Big Dirty” Raymond and others, sent down Dick Riddle, a Wharton School of Business MBA to tend the flock. Dick and I became instant fast friends, and somehow managed to have a lot of fun despite the Canadians, eh. That was the good part. Along with the deal came John Chisholm, Tim’s younger brother, to be Sales Manager, a position that I had held for a couple of years. I spent my time racing, developing, designing, drinking, playing gin rummy, etc. John’s office was in frickin’ Pennsylvania, which was a good thing for us, but damned if those sharp eyed Canadians didn’t realize that in only 10 months, eh, and they sent him down to live with us.

John was a God fearing Christian, a good husband and father, and a decent boat handler, but damn, he was, er, quiet. Riddle and I conspired to have him sent back to Pennsylvania, and when that didn’t work, had him fired. Two weeks later, Tim and John bought the Company, and canned Riddle and me. Boy, I didn’t see that one coming. They built a new Donzi model called the “Minx” or “Manx” or something like that. Tim told me that they had fired our old PR firm, and hired a Detroit big-time one. Their first PR line was “When they built this baby, they threw away the mold!”

Tim’s sense of humor was second to none. A couple of Tim’s stories to make my point: Al Cadwallader was a genius engineer, and the head of Teleflex engineering. Al was responsible for inventing, perfecting and bringing to market most of the new Teleflex proprietary, unique products in those days. The most important of the new products was the “wound helix” steering cable, which took flexible marine steering cables to a new level of smoothness, safety, longevity, etc. On the day that the machine that Al had invented to actually manufacture the cable was ready for a demonstration, Al was in jail. He apparently had enjoyed several wives, common and otherwise, and a kid or two. He had not performed his proper alimony, child support, and other ex-husbandly duties.

The demonstration could not go on without him, so Tim set about springing him. Al and Tim had identical VW Beetles (also had identical Piper single engine aircraft, which they often flew from North Wales, Pa. to Maryland, or some similar place to play Cow Pasture Pool (Golf). Tim went to Al’s VW in the Teleflex parking lot, and was preparing to borrow it to rescue Al when he noticed several uncashed paychecks on the floor of the car. As Tim gathered them up, he realized that that there were enough funds on the floor to cover Al’s “owies”, and get him to the big show. Tim went to the local bank, where he was a director, cashed Al’s old checks, then to the “joint” to spring the desperado, Cadwallader.

Needless to say, Al was thrilled to be free, and was grateful to Tim for arranging things. They drove to the factory for the demonstration, and were greeted by a horde of stockholders, employees, families, clients, etc. A hush came over the crowd as Al approached the controls of the huge, complex machine which might be a bonanza for all concerned. With a simple “Here goes! Eh?” he hit the switch and all sorts of machine-type noises joined into a harmony, and out of the other end of the device came a perfectly wound helix cable at a speed never before seen that would allow Teleflex to dominate the small boat steering market for decades. Tim and Al answered questions, posed for pictures, shook a lot of hands, and finally retired to the neighborhood saloon for some Drambuie. After a few hugs and drinks, Tim said “Al, I have some good news for you! We are giving you a twenty thousand dollar bonus in appreciation of your effort, an extra week vacation each year, and a ten thousand dollar a year salary increase.” “Wow, Tim, that is great! How much will I be making, then?” “That will put you at $35,000 a year.” “You mean that you were only paying me $25,000?” “Well, yes.” “You cheap Bastard! I quit!” Al walked out the door, and never came back.

Teleflex America and Teleflex UK were loosely joined, business and manufacturing wise. The Managing Director of the British bunch came over for a powwow with Tim, and, having wrapped up business a couple of days early, Tim decided to offer the UK bloke a day or two of fun. “What would you like to do or see in America while you are here, Nigel?” “I would like to go to Chicago, and see some gangsters.” Tim: “There are no more gangsters in Chicago.” “Oh, yes there are. I watch the news!” “OK, what the hell, let’s go.” Teleflex had a company plane, of sorts. It was D-18 Beechcraft, built in the 40’s, twin engines, twin tail, modified with tricycle gear. The doughty crew jumped in the plane and flew from North Wales, Pa. to Chicago’s Meigs Field, a tiny airport on the shore of Lake Michigan. They immediately took a cab to the Palmer House Hotel. As they were settling with the driver, and retrieving their luggage, gunshots were heard in the barbershop right next to the main entrance. A large black man backed out of the entrance to the barbershop rapidly. He had a wad of cash in one hand, a black pistol in the other, and a large knife protruding from his sternum. He landed on his back, next to a beaming Nigel, who cried “Goddam, Tim, this is GREAT! Thank you so much!”

Tim came to the New York Boat Show in the mid-sixties to help all the Teleflex troops, probably about forty guys, with all the groups from the company. Tim waited for a cab at the Airport. A Yellow Cab pulled up, the door opened, and out pranced an extremely gay male (probably) dressed in colorful silks and high heels. Tim got in, and noticed the fellow (?) had left his gaily decorated parasol. Tim handed out the parasol and said “Fairy Godmother, you forgot your magic wand.” The guy grabbed it, turned it to point at Tim and said “Turn to s**t!”

Tim’s frail body finally failed him. I learned the sad news from his excellent son, Sandy. He told me that Tim had left a sum of money for a wake party, to be held at one of our local hangouts, “Rum Runner Bay”, in North Miami Beach. Rum Runner was owned by our good friends, Bill Beck, Regis Allen and Jim Breuil, Jr. Jim was either Prez or Sales Manager of Magnum Marine in those days. As I recall, we held it on a Saturday afternoon, and enjoyed a large turnout of Tim’s pals, including all the boat builders in the area. Several of us spoke for Tim, nobody shed a tear, and, as the afternoon got blearier, Sandy, Tim’s son who had been drinking right along with the men, pointed out that there was a Cuban ‘Quince’ in progress. The quince is a sort of rite of passage for Cuban girls to celebrate menstruation or something. Fact was, there were about two dozen 15 year old beautiful Cuban girls in White formals that resembled wedding gowns. They were accompanied by a group of swarthy men in Guyaberas, which are shirts made to hide fat bellies and/or guns. The senoritas lined up for a group picture right outside the big window overlooking the Marina. Sandy was pretty well oiled by that point, and allowed that Tim would probably have wanted him to “moon” the girls. Hell of an idea, we thought. Sandy stumbled out to group, stood next to the photographer, and delivered the most complete moon ever seen in these parts. One might say that it included, er, stars and planets, if you get my drift. Believe it or not, about fifty swarthy fathers and big brothers, some of which showed the true purpose of a Guyabera, wanted Sandy’s head. Luckily, we outnumbered them, and had a few cops in our group. We finally got them to accept an apology from Sandy, who had secretly received several phone numbers. Great sendoff for a great guy!