Home Brownie's Bites Brownie’s Bites: You Don’t HAVE to be Crazy, But it Helps

To be a real offshore racer in 1963, you had to be a tough sumbitch, with muscles bulging, tobacco spitting, fighting, squinty eyed, brawling, beer drinking, take no prisoners attitude, and a stand up cat. That was just the women! In 1963, there had only been a half dozen actual offshore races, mostly from Miami to Nassau, Bahamas. It stands to reason that there were very few ‘real’ offshore racing boats. Most of the entries were boats that could be used for other purposes, such as fishing, drinking, and smuggling, that sort of thing.

One of the reasons that there was only one race a year in Miami in 1963, was the fact that the Czar of offshore racing, Sherman F. Crise had a cod-lock on promotions in the Bahamas. We formed a new offshore racing club, OPBRA, which either meant Offshore Power Boat Racing Association, or Old pricks (who) bitch (and) run away, depending on whom one asked. In any case, the club was well attended, well formed, well financed, and anxious to go racing. We started with 240 members. We elected Jack Manson to be the first President. An excellent choice. We set up a study committee to study alternate courses, and after a few months, they discovered Key West, which had actually been there all the time! You will be pleased to know that some of those people are running your U.S. gummint to this day!

We immediately scheduled our first race: Miami-Key West, November 4th, 1963. Several new almost offshore boats were under construction, and spirits were high. The fastest boat in the upcoming race was to be Restaurateur Mike Gordon’s Formula 275, powered by a pair of 409 turbocharged Chevys. Aronow built the beautiful dark blue hull and deck, and Sam Sarra, chief engineer of Daytona Boat Works rigged and finished it. It was a beautiful piece of work, with mahogany seats in the front, teak decks, and a curious driving station for Mike in the stern, which resembled the skeleton of a center console. It was all aluminum, bolted to the floor, with a pair of very substantial tubes coming aft, bellybutton high, with a window washer’s safety harness stretched across, holding Mike in perfect position to steer the boat, while Sam throttled it. Crew was to be Sam Sarra, throttles, Navigator, Prescott Coulter, current APBA predicted log race champion (what the hell ever that is, “I predict that, if you don’t turn, you are gonna hit that frickin’ log!), and Mike steering. Navigation wasn’t nearly as difficult as the Nassau course, requiring only that one keep America on the right. Regarding Mike Gordon, he was the greatest guy. He liked to cook and peel potatoes at his fine restaurant. His hobby was boat racing. He had an excellent Rayson Craft marathon boat with a big Holman Moody engine that he raced on a regular basis. He had won a number of races and championships over a multi- year career. Unfortunately, his enthusiasm somewhat overshadowed his driving ability, and in a bathing suit, his body resembled one made by Igor, with screws and plates and zipper looking stitches. No bolts. He was in no condition to hang on to a wild boat for 3 or 4 hours, hence, the harness. 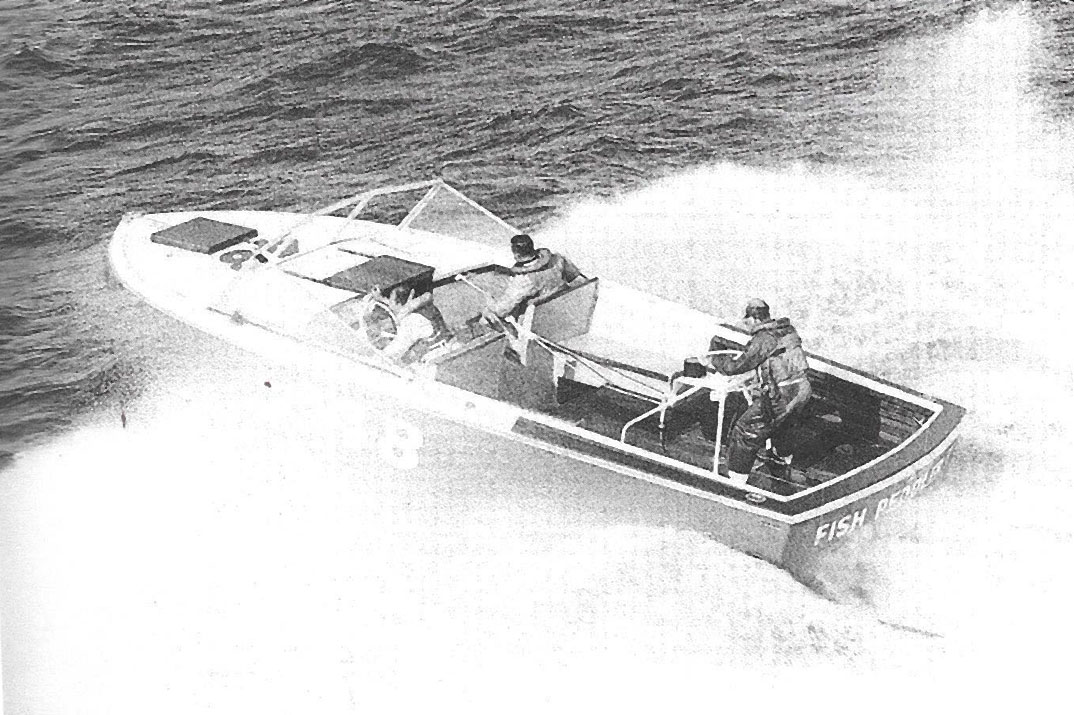 Other entries were, Jack Manson in his 43 foot Diesel Allied, Jim Breuil, Jr., in his 36 foot Diesel Enterprise, Dick Bertram in the famous 31 foot “Moppie”, Don Aronow, Jim Meyer, and I in our brand new Formula 233’s, Jack Barnes in his Amby 26’, which made it over 4 miles before it sank, the beautiful Jacoby girls in their 31’ Prowler, “Miss Amazon”, Bud Dawson in a Prowler, and a dozen others. We had planned the race for a historically rough period, because we were manly men (and women), and it just didn’t get too rough for us. Wellllllll, some of them (not me!) must have been rethinking that strategy the morning of the race. It was blowing about thirty knots out of the north, and the seas were around 15’ at Fowey Light, the first check point (and seasick station for the check boat).

An amazingly hungover fleet turned up at the 7:00 AM appointed hour. We had been toasting our brilliance at the driver’s meeting the evening before. In all fairness, everybody showed up, what being manly men (and women) and all. At the flare, away we went. Bertram was first to Fowey Light, Jack Barnes was first to the bottom, and my co-driver, Dave Stirrat and I were first to break into Forrest Johnson’s Prowler Boat factory on the Miami River, to fabricate a new alternator bracket for my speedy 400 HP Interceptor engine! Dave had raised the engine box before the start, and the F%&*#@ alternator just fell off, right into the bilge. Dave and I were both pretty handy with our hands, and we fixed it in record time, untied the watchman, and joined the race. Boy, was it rough. We had second thoughts about trying to catch up after two hours, but we were afraid to try to turn around!

Bertram held the lead to Molasses Reef, where Fish Peddler took over. They traded the lead several times, until Bertram bent a shaft, and quit. Sam did not relax the pace, not knowing where Bertram was. Now that they were halfway there, the seas were directly behind them, and they could span 20 or 30 yards at a leap, with Sam carefully tending the throttles to keep the delicate engines alive. Prescott, the navigator had two problems. One, his massive butt had destroyed the starboard seat, and, for a time, he was sitting with his heels neatly tucked in behind his ears! Sam helped him out, and let him sit next to him. Two, America was now directly astern. Not a good sign. He looked back to see what Mike was up to, and noticed that Mike had lost his footing, and turned upside down in the harness and was banging his bald, helmetless head on the teak deck at the bottom of each wave. 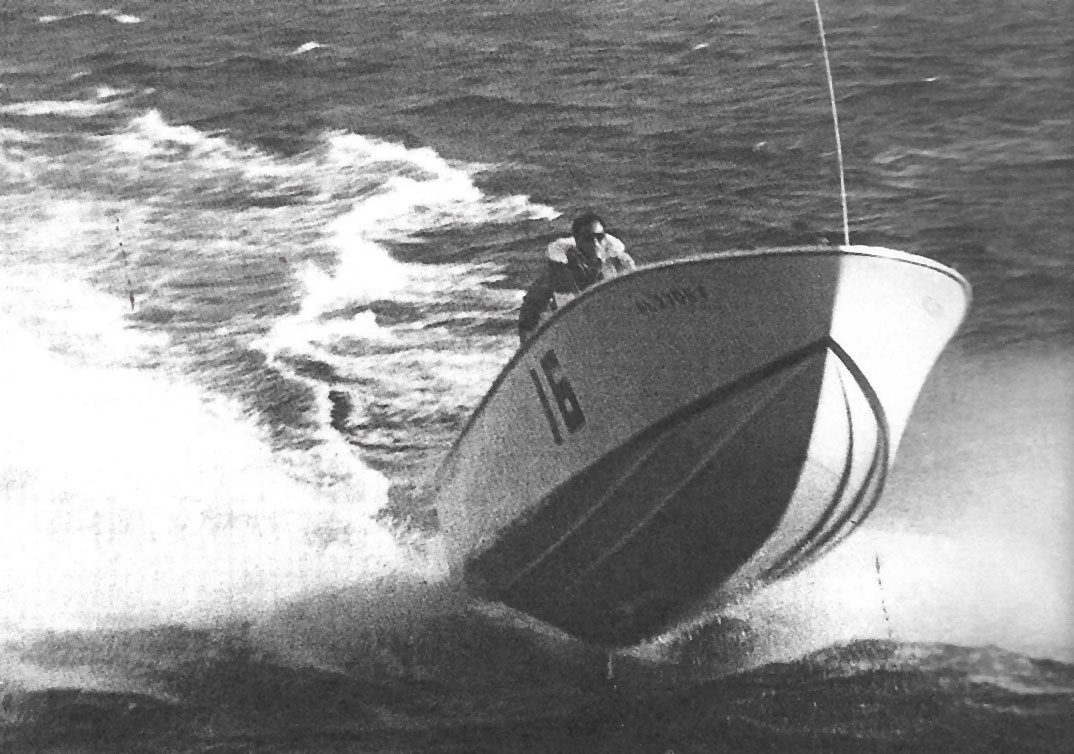 Prescott finally got Sam to slow down a bit, and they decided to take Mike in to Marathon for some repairs. It was smooth inside the reef, and they ran wide open up to the commercial dock. They gently threw Mike up onto the dock, asked the startled bystanders to call a doctor and sped off. In the smooth water, Prescott could read the brand new OPBRA rule book. “Hey Sam! We gotta finish with the entire crew!” “Darn it!” or something like that. Sam wheeled the boat around, and they ran back to the dock, picked up Mike and threw him back in the boat and lashed him to the stern. Away they went again. The concert of the engines, turbochargers, Vee drives, Mike cussing, and Sam laughing maniacally gave them hope, and they rejoined the race in smoother water. Jack Manson had taken the lead in his big Diesel. Sam, now steering and throttling, passed him like a shot. This unlikely crew rounded Sambo light in smooth water. Prescott had freed Mike, and there were bloody handslaps all around. The finish was two miles away when the port battery gave up the last of its life juices, and the port engine shut down. With only one engine, and a centerline rudder, they could only make counterclockwise turns. Manson roared by (at 43 MPH), as did the rest of the fleet, including me, last. I think Fish Peddler floated in with the tide.

The Key West Holiday Inn hosted the awards that same night. The group that assembled in the banquet room resembled the survivors from some WWII sea tragedy. It took about three hours for the participants to make their way to the stage to get their trophies. Everyone who still had skin on their hands clapped and whistled as Jack Manson and his crew went to the stage to pick up their gold. He confided that they had broken 12 ribs. Eight on the boat, four on the crew. The presenter announced a special “Rough Rider” award for Mike Gordon. I think it was for losing the most blood, or making the most circles, or something like that. Mike was still dressed in his yellow slicker as he approached the stage, clump, slide, clump, slide… He accepted the “Rough Rider” award with great dignity. When asked if he was injured, he replied “I don’t know. I can’t get my arms high enough to get my rain slicker off”. He then summed up the race for all of us: