Home Brownie's Bites Brownie’s Bites: You Don’t Have to be Tough to Race, But it...

I consider my self to be one of the more fortunate planetarians (Considering that I am old, poor, damaged, disheveled, etc.) to have rubbed elbows with many of my personal heroes in my second favorite sport. I have previously related that I arrived in Miami at exactly the moment of the rebirth of offshore powerboat racing. Coincidence? I don’t know. I do know that I was exposed to a cross section of characters that probably would have never become friends under any other circumstance. Everyone knows the big names: Sam Griffith, Dick Bertram, Don Aronow, Jim Wynne, Odell Lewis, Jack Manson, Jim Breuil, JIM BREUIL? He isn’t famous! He is, in our circles. Actually, there were two, Senior and Junior. Jim Sr. was a rough and tumble oil man, wildcatter, boat builder, rich sumbitch, tough guy, big game fisherman, and father of Jim, Jr. Jim, Sr. actually owned the first two Miami-Nassau race winners.

Jim Jr., hereinafter known as “Jim”, had all the traits of his dad, and then some. He was probably the all around toughest guy of all my friends, and some of them are pretty frickin’ tough. When he was younger, he was involved in the Tulsa oil boom with his Dad, and he lived the life of a wildcatter. He told us the story of being in a western saloon, sitting at the bar, when he noticed a damsel in distress being slapped by a cowboy (You can tell cowboys by their big hats, big belt buckles and… well, never mind) while sitting in a booth. When the cowboy went to the “Juan” (southwestern for John), Jim slipped over to comfort the poor maiden, probably named Miss Ellie, or equivalent. Jim was comforting away, when the guy with the big hat showed up, and asked Jim politely to depart. (Hit him upside the head). Big Hat was only about 5’8”, 150 pounds, so Jim assumed that he could probably hold on to one of the maiden’s breasts, while handling Big Hat with the other, no problem. Well, one problem. BH was tougher than a boot! He clocked Jim a couple of good ones, forcing him to drop the tit, and pay attention to business. As I said, Jim was tough! They fought a pitched battle with chairs, fists, etc., until Jim finally knocked him out through the swinging doors, just like Shane. He went back to the booth, to resume his comforting, when, Lo and Behold! Big Hat came back in, went to bar for one shot, then jumped astride Jim for Round Two. They broke some more furniture, got a few more lumps, and BH got another trip out the swinging door. This time, he didn’t come back so quickly. Jim finished comforting, and went back to bar to finish his Cutty Sark, when BH showed up and came to the bar, next to Jim. Jim was alert for a sucker punch, when BH said “Dang, you put up one hell of a fight. Let me buy you a drink, no hard feelings”. “Sure”. “Bartender, two Jack Daniel’s down here”. “I don’t drink Jack Daniel’s”. “You do when you drink with me”. “Screw you!” Upon which Jim threw the whiskey into BH’s face and socked him. This time, Jim got knocked out. When he came to, he was being comforted by Miss Ellie. He said, “Who in the hell was that guy?” “Oh, that’s my husband, Casey Tibbs, World Champion Cowboy.”

On another occasion, Jim Went to Viareggio, Italy, to race in the Via Reggio-Bastia-Viareggio offshore race. They were lunching in a Trattoria. Jim, Don Aronow, Knocky House, Dick Genth, Billy Shand-Kydd and a few others were having a few adult beverages at the bar. Jim was standing back to back with an Italian oil man, who was describing, in great detail, the wonders of the oil business to someone on the side opposite Jim. The Oil Man was taking credit for some of the recent technological advances in the oil business, when Jim reached his boiling point. Jim whirled around and shouted, “You mother****rs couldn’t drill a rathole if we didn’t show you how!” BAM! Jim hit him right between the eyes. Unfortunately, there were a dozen other oil guys there, and all the racers had to lend a hand. They won, but had to pony up $2400 American to stay out of the local hoosegow.

In those days, Jim was President of Enterprise Boat Co., the family business. They built excellent sport fishermen, designed by Bob Hobbs, and had a brand new, full service marina “Harbour One”, in North Miami Beach. Jim placed an ad for a new secretary, and was delighted to interview one of the first applicants, a gorgeous redhead. The interview was running overtime, when Jim suggested that they look over the Harbour One Yacht Club bar and restaurant. They were discussing salary and such, when the potential new employee’s bitter half showed up and yelled at the girl, accusing her of screwing the boss already, and calling her a very bad female name. She burst into tears as her redneck husband slammed doors on the way out. Jim comforted her (I don’t recall him ever comforting a man, come to think of it.) “Don’t worry, my dear, I will go explain to him that you are being hired for an excellent paying job, and that I am happily married. Just sit tight.” In a few minutes, he returned, smiling. “There, I told you. He is fine with it, and said that you should finish your drink and our conversation, and that he would wait in the truck. After a few minutes, she left, and, upon reaching the truck, screamed when she found her husband knocked unconscious in the driver’s seat.

Jim raced outboard marathon boats successfully. He raced a twin Mercury powered 17 foot boat in both the Miami 250, and the famous 9 Hour race, solo. He got the nickname “Iron Man”. Jim’s high point in the 9 Hour was crashing into the race leader, “Tiny Tim” as they were both at the fuel dock.

Jim left us on April fool’s day, about 20 years ago. He died the same day as our friend, Dick Genth. Being a veteran, Jim had a service from the American Legion. They cited Jim’s military service. He had volunteered at 18 years old to join the Army Air Force, then further volunteered to be a tail gunner in a B-24 in Italy. He survived the murderous Ploesti Oil Fields run. They flew 100 or so combat missions, and shot down several Fokkers (He explained that some of those Fokkers were Messerschmitt’s).

Several years ago, I wrote a story about Jim in race program for the Key West World Championship. It follows. Part of it has printed here before, but it is worth the read. Smooth seas and fair winds, Jim…. 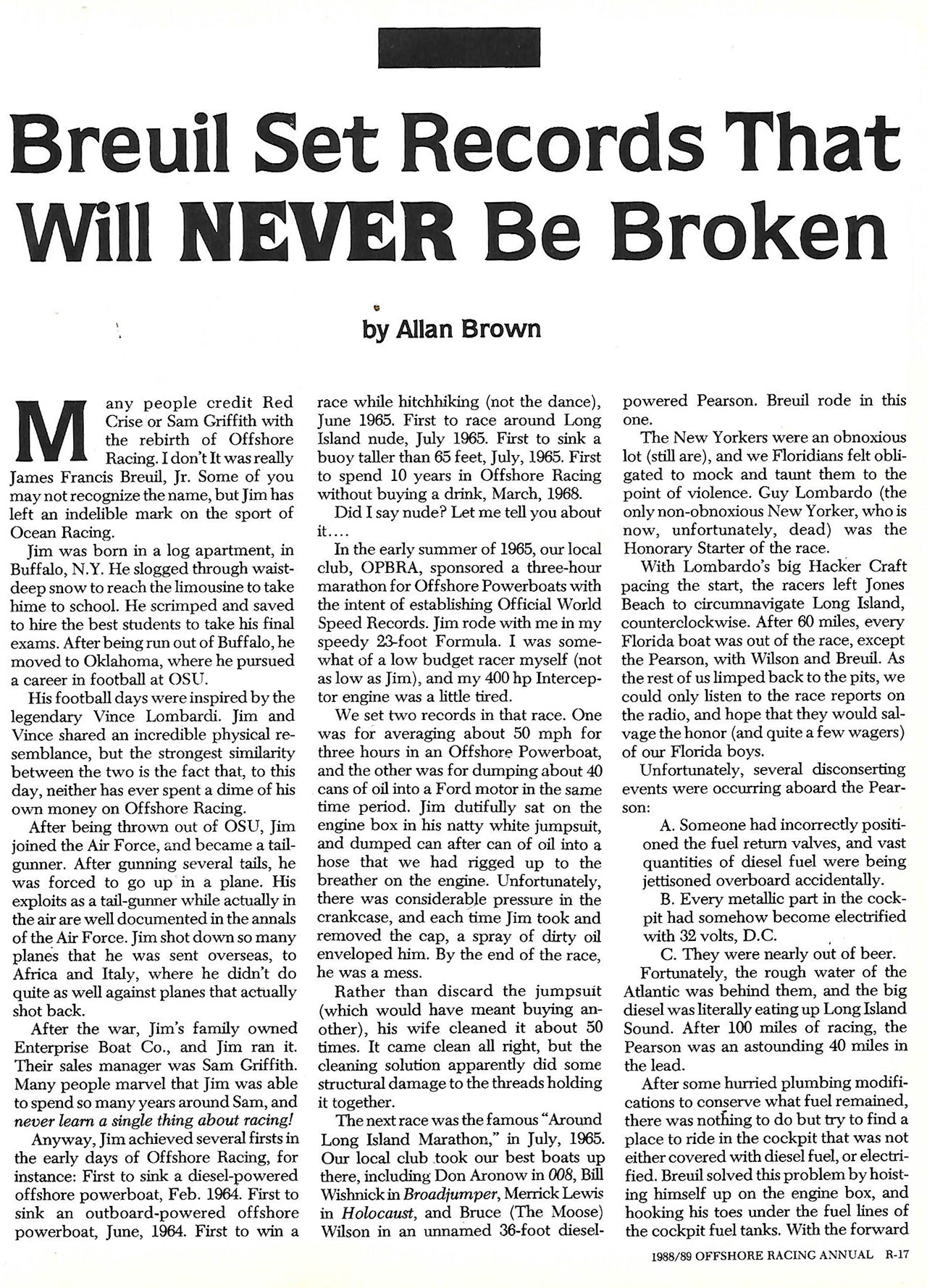 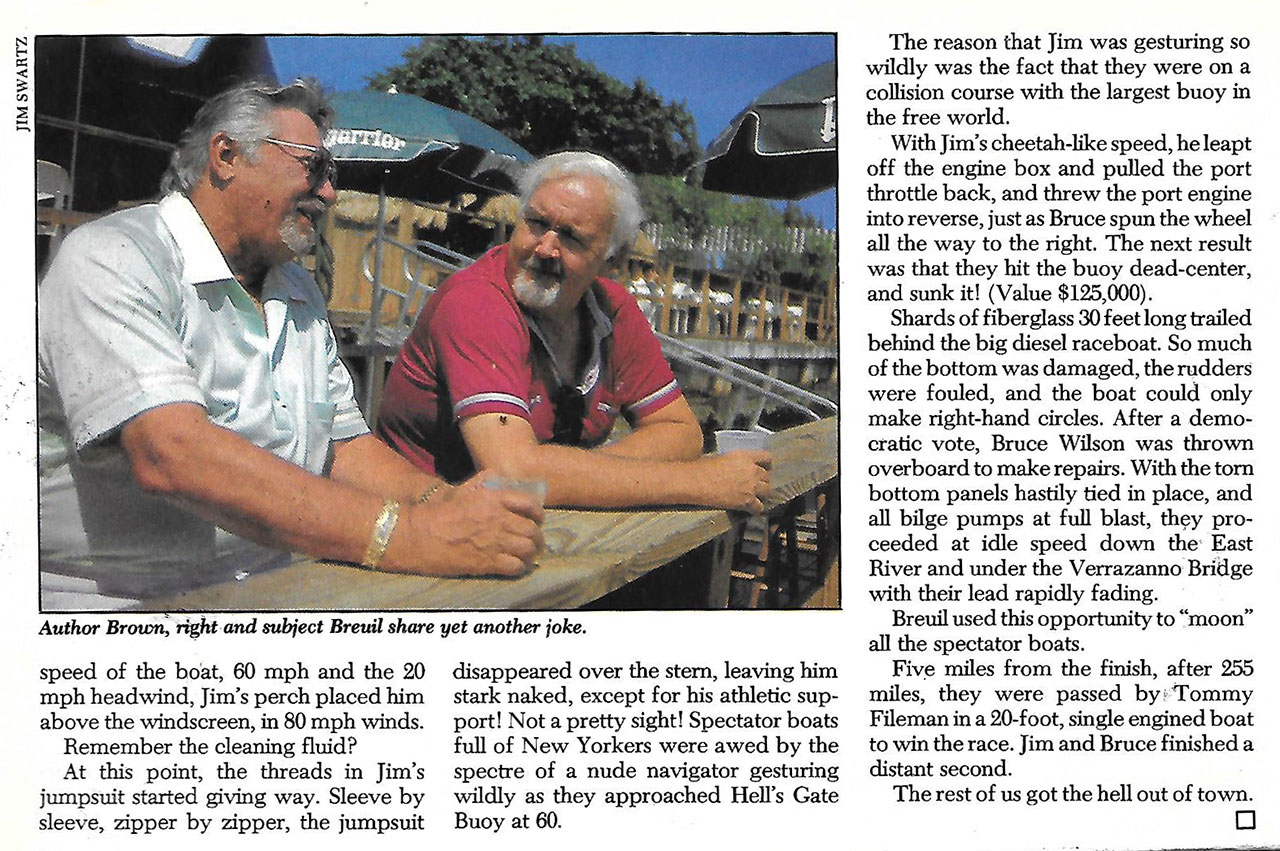