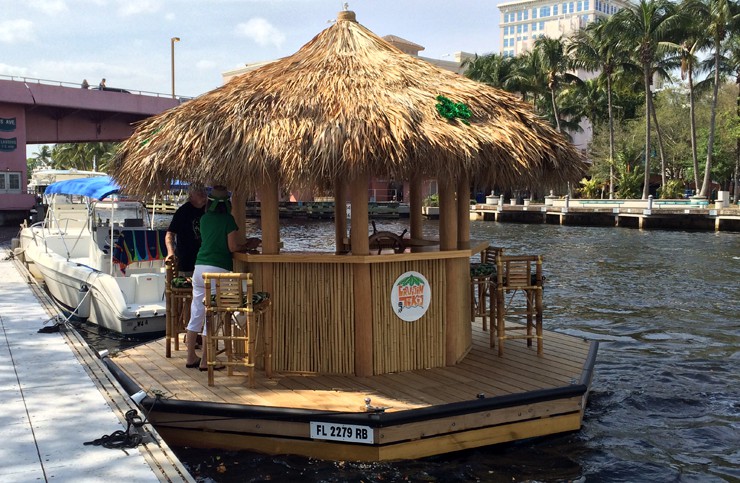 Fort Lauderdale local Greg Darby has been building his “Cruisin’ Tikis” since February of this year and he’s starting to get things rolling!

If you’ve seen him out on the water near Ft. Lauderdale then you know what we’re talking about and you probably couldn’t help but stare and take a few photos or video. The vessel, equipped with stools and a circular bar top—even a fridge, wet bar and LED lights—is a prototype for the model Darby invented himself, which he’ll be selling around the country. (Three Cruisin’ Tikis were already sold before his first boat was even in the water, according to Darby.)

Darby comes from an engineering background and instead of retiring and floating around in his own Cruisin Tiki all day, he’s built a business out of it.

The boats are customizable with either bar stools or picnic benches and are sold at two different price points: non-powered ($16,500), which he calls a docksider, or motorized ($21,500). The latter comes with a six-year warranty through Suzuki.

The Cruisin’ Tiki is Coast Guard compliant and ready to hit the water wherever you are.

“This tiki wasn’t made for work,” he said. “This is all about relaxing and kicking back and enjoying the river.”

Darby is heading up to the Palm Beach International Boat Show on his Cruisin’ Tiki this weekend, taking what he estimates will be a 12- to 15-hour boat trip, depending on how many stops he makes along the way. It’s guerilla marketing tactics like this, along with the power of social media, that have helped word spread so fast.

Here in Fort Lauderdale, locals can also look forward to seeing the Cruisin’ Tikis make an appearance at WinterFest in December.