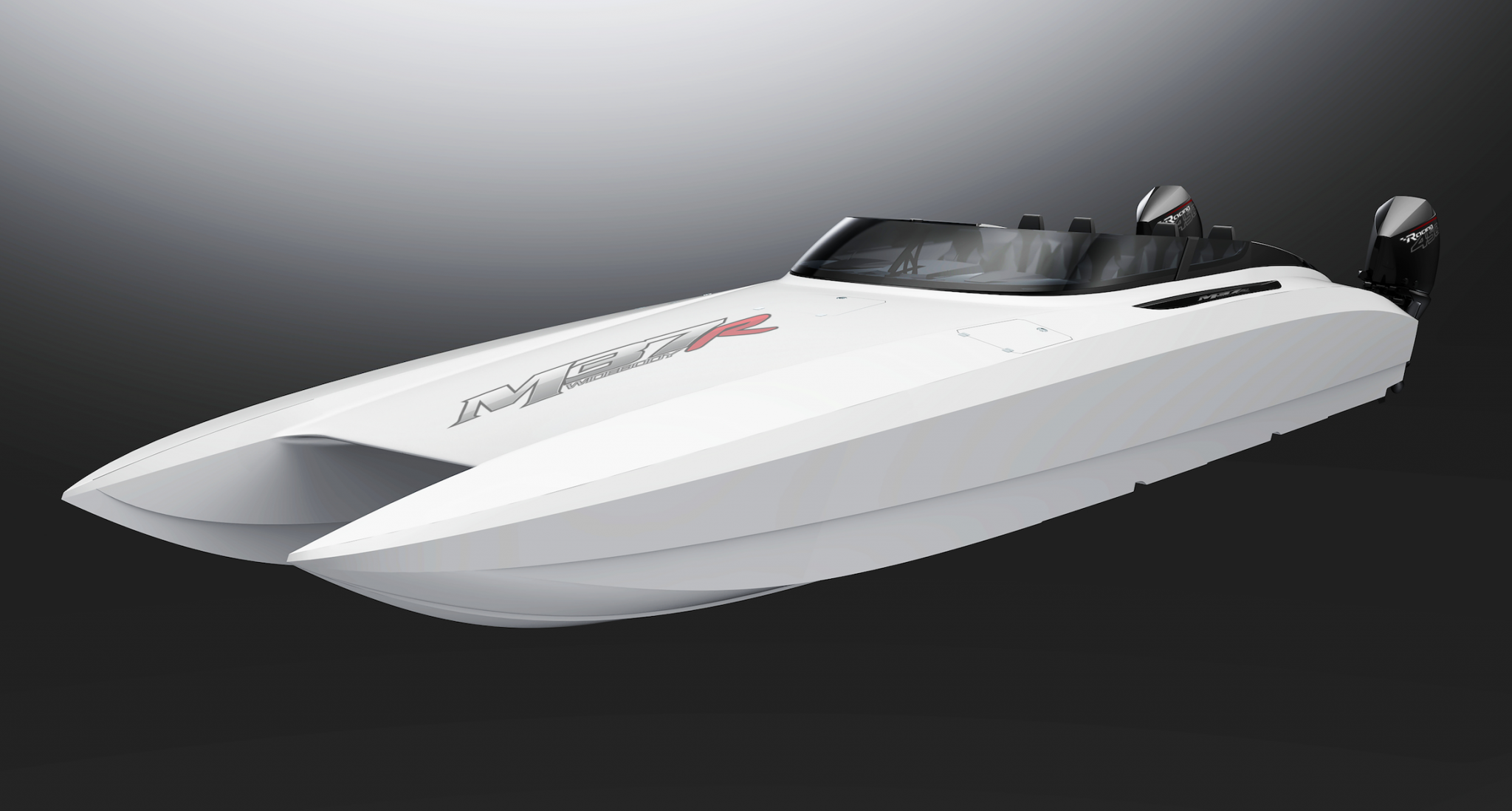 DCB Performance Boats of El Cajon, CA—builder of the popular “M” series of luxury go-fast catamarans—has announced plans to add another “M” to its growing stable that currently includes models 28 to 44 feet. In the works for more than a year, the new M37R will fill a void between the M35 and the M41.

“The M37R is a whole new design for us,” DCB’s Tony Chiaramonte told Powerboat Nation. “It’s a true tunnel, so there’s no center pod. It’s 10½ feet wide and 37 feet long. That’s kind of what everybody wants right now. We thought about it and realized we needed to get in the game here, so we did.”

Chiaramonte revealed that DCB had pondered the idea of doing a true tunnel in an inboard version a couple of years ago. But now, with the advent of Mercury Racing’s new 450R outboard, “it’s a whole new ballgame,” he said. “We’re going to have a 125-mph outboard boat, which is unheard of. The shift and throttle will be in the middle of the boat now, so it’s a whole new venture for us. We’re getting lots of good play on it.”

DCB has taken at least three orders for the M37R so far, with more surely to come quickly; the DCB crew hopes to have the boat completed in time for the 2020 Desert Storm. The first out of the mold will be purchased by repeat customer Brad Macaulay of British Columbia, Canada, who has owned M31 and M35 Widebody DCBs. “He’ll get the first one, and he’s going to let us use it when we need it to give demos and stuff like that,” Chiaramonte says.

Expect most M37R customers to opt for the Mercury Racing 450R outboards, although Chiaramonte says it’s feasible that some will go for the still-popular 400Rs.

As of this writing, Chiaramonte and Jeff Johnston of DCB are attending the 2019 Lake of the Ozarks Poker Run & Shootout. Also attending are Mauricio Vivanco (with his 2019 M31 Widebody Open Bow with twin Mercury Racing 700s), Dave Magoo (with his new M44 Bananas XL) and Brad Benson (with his new M33R Widebody). Chiaramonte, who traditionally participates in the Shootout, said he was unsure if he would get behind the wheel himself this year.

“I don’t know if I’m driving anything this year,” he says. “I’m trying to push the customers to do that more. They’ve got enough experience running these boats, and it’s quite an adrenaline rush. I think everyone should experience that.”

Some specs on the new M37R: