It’s big news when a David vs Goliath type battle comes about. Such as a Manifold vs Header shootout.

Earlier this year at the Miami International boat show, Hardin Marine introduced the new Seaward Exhaust Manifold systems and claimed  they were going to revolutionize the performance exhaust manifold world. We have been waiting not so patiently to see just exactly what all of these claims really meant.

The most significant claim is that this is a true bolt-on to Mercury Racing’s 525/600/700 engines, requiring no cylinder head modifications. No more torturous drilling, tapping, and special jigs trying to adapt an old style exhaust manifold to the engine.

Jeff pointed out that Hardin was able to cast a super thick 356T one piece true aluminum tube style header and encase that header in a draw-formed, heat treated, non-porous, billet aluminum jacket. Besides the design features, the real behind-the-scenes story is the corrosion resistance treatments that are state of the art, true Military/OEM spec corrosion protection. This modern evolution of the treatment process shatters the longevity test of everything previously produced by nearly five times. Taking all of this into account, these systems are over $2,200 dollars less than another equivalent header system!!

Jeff again points out that without the veteran team of craftsmen that build and finish many of their over 3000 products, this type of feat wouldn’t have been possible.

But the real meat of this report is just how would the product stand up against an OEM tubular header system? So when a chance to run back to back with a OEM Mercury Racing Header system became available at Goodwin Competitions facility, Hardin Marine jumped at the chance.

Todd Goodwin reports that he was finalizing some turbo charging development work on a freshly rebuilt Mercury Racing 525SCI. Having finished the turbo project they could easily run the systems in a back to back shootout.

Todd’s exact words were pleasantly surprising as we never imagined the manifold system could perform so well. Todd removed the OEM headers and bolted the new Hardin Seaward equipped system on with their matching riser to tailpipe connectors.

The Seaward Performance manifold system performed amazingly, pulling a respectable 529 horsepower at 5400 RPM.  Todd said that while he felt the OEM header system has the ability to outperform a manifold system, the fact that these manifolds performed so well was impressive.

The nearly $2,000 price saving, and the definite reliability advantages of a manifold system are sure to make this a popular option for for many boaters seeking value and reliability.

Congrats to the Hardin Marine Team for another winning product offering. 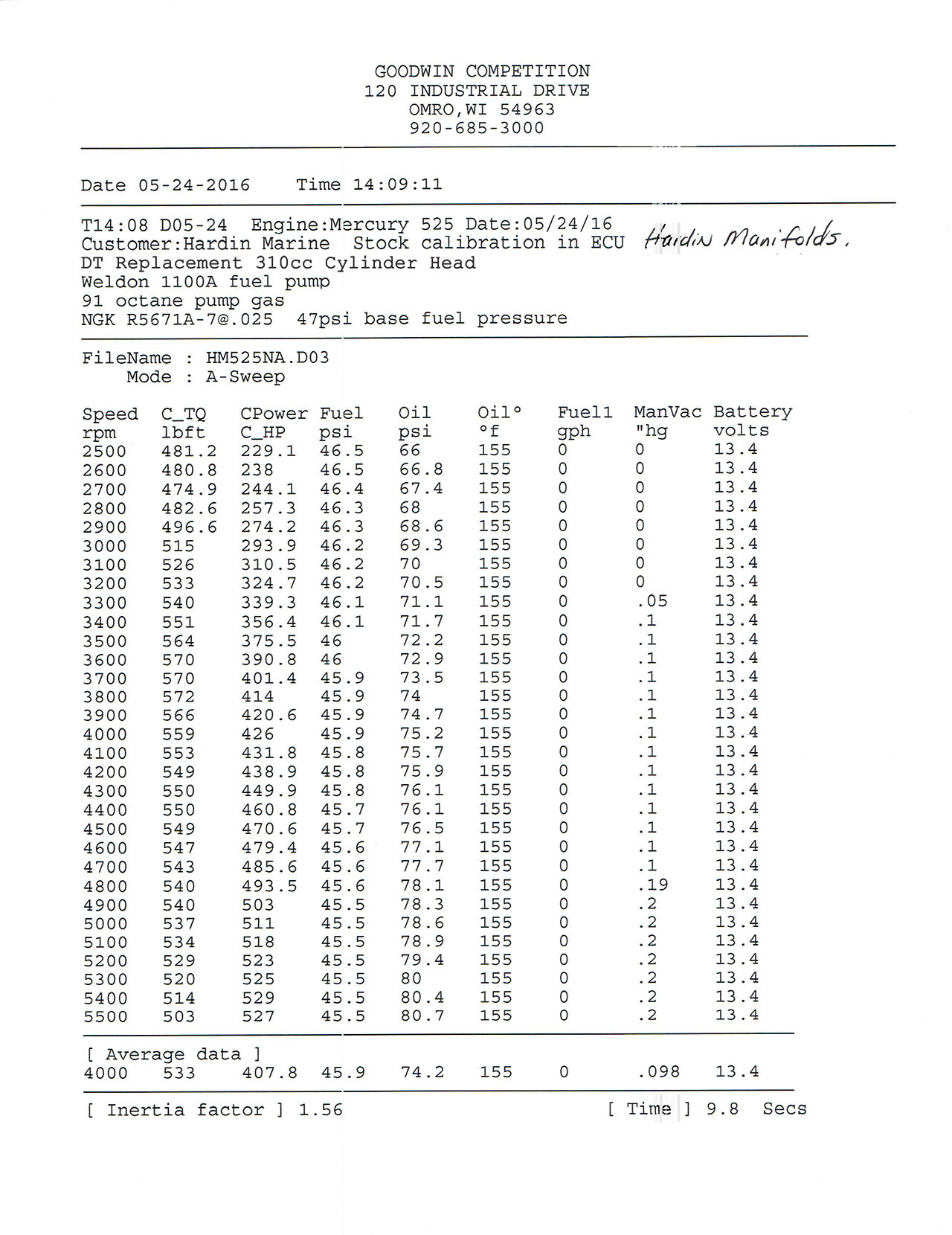