IMCO Marine of San Dimas, CA, is preparing to introduce a revolutionary SCX Dual-Downshaft Lower Unit it says is a genuine game-changer for high-performance sterndrive boaters.

How much horsepower and torque can a Mercury style Bravo sterndrive handle? High-performance boaters have been asking that question for years, ever since the original Bravo One drive was introduced in 1988. And although Mercury has occasionally upped suggested horsepower limits over the past thirty years thanks to the introduction of the XR and XZ drive models, the temptation to exceed those ceilings is something many boaters are willing to risk.

Unfortunately, that bravery is commonly rewarded by repeated expensive trips to the repair shop. Excessive horsepower and torque are seldom compatible with Bravo longevity and reliability. For many power-prone boaters, the mechanical carnage caused by massive internal combustion muscle in the engine compartment has become an accepted fact of high performance Bravo boating. Those who tried to beat the odds either turned to aftermarket companies building hybrid Bravo type drives on steroids or took the leap to Mercury Racing number Six or M8 drives causing a significant dent in their wallet.

But now there’s a better way. IMCO Marine, already well known for its much-proven SC, SCX and SCX4 drive options, has developed something brand new over the past 18 months, targeted to bridge that gap in the Bravo market between 600 to 1000 (possibly more) horsepower. Some might call it the “missing link.” It’s the new IMCO SCX “Dual Downshaft” lower.

The concept behind the “Dual Downshaft” is simple. As more boaters cram more horsepower into the engine compartment, conventional single vertical downshaft Bravos quickly kill the relatively small lower unit pinion gears. Serial abusers behind the wheel of their hot rods continue to find ways to routinely tear-up new gear sets in duty-cycles of 30 or 40 hours, and sometimes even less. With only one standard downshaft and single gear to gear contact mandated by the tight confines of the slender and hydro-dynamically efficient Bravo gearcase however, installing bigger, more heavy-duty gears is not a feasible solution without sacrificing performance.

Recognizing the durability superiority of Mercury Racing’s number Six and M8 drives, also with dual downshaft technology, the path was obvious. Allowing torque loads to be spread between two shafts and two gears instead of one, this was IMCO’s answer to achieving greater strength, more reliability and longer duty-cycles with higher output engines.

Here are some important things to know. First, the new IMCO “Dual Downshaft” is only compatible with an IMCO SCX upper. Next, it is not intended to be applied as a ‘surfacing’ drive like the SCX4. For that reason, the “Dual Downshaft” is intended primarily for use on single engine air entrapment/cat hulls (especially deckboats) with massive horsepower, or vee-bottoms with big output twin or single powerplant applications. The “Dual Downshaft” is two-inches shorter than a stock Bravo and retains an internal shifting cone-clutch (no external transmission needed) and utilizes conventional wet sump lubrication. The propshaft is 1-1/4-inch, however a 1-7/16-inch propshaft option may be offered in the future. All IMCO SCX gear ratios are offered including 1.50, 1.34 and 1.25.

Internally, IMCO has integrated a number of ingenious solutions including the use of two very high priority custom spur gears manufactured to aircraft quality specs. It is also evident that the lower bullet portion of the gearcase incorporates IMCO’s unique SC forward extended skeg with a built-in low water pick-up inlet.

If you’re wondering how IMCO engineered this product, it should be noted that it was done in-house, aided by sophisticated CAD software and a 3D printer. A little over a year ago, IMCO invested a considerable sum of money in a high-end 3D printer. As the engineering unfolded, what was on the computer monitor was ‘printed-out’ as full-size actual parts in plastic before any of the machining or mold making began.

Initially, IMCO manufactured a run of only ten complete “Dual Downshaft” units, several of which are out on loan to specific boaters for field testing. So far all indications are positive without any reported failures. Some of those units have already returned to IMCO for tear-down and inspection receiving a clean bill of health.

So, how much does the SCX “Dual Downshaft” lower upgrade cost? As listed on the IMCO website, a “Dual Downshaft” is approximately $4,500 to $5,000 more than a conventional SCX lower (MSRP $9,900). A little over $2,000 of that price tag is in custom gears alone. Although it is difficult to calculate at this time how much additional longevity the “Dual Downshaft” will deliver a boater, it should be significant, especially if you’re talking about boats with horsepower approaching 1,000 or maybe more. When you compute the cost of Bravo drive rebuilds every 30 or 40 hours, the “Dual Downshaft” begins to look like both a bargain and an insurance policy against inconvenient down-time during optimum boating seasons for repairs.

If you’re looking to place an order, the production run of “Dual Downshafts” is projected to be available after the first of the year (mid-January to early February 2019).

The IMCO “Dual Downshaft” is not a replacement or substitute for a Mercury Racing #6 or an M8 drive, but it might be just what high performance boaters have been wishing for. 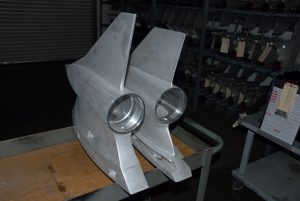 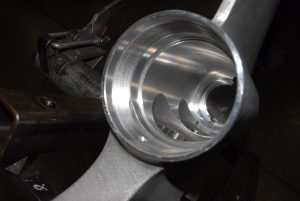 Backend of the SCX gearcase machined with two pockets and downshafts for pinion gears. 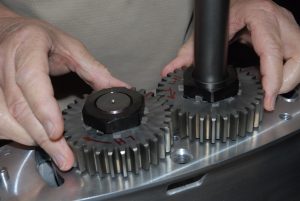 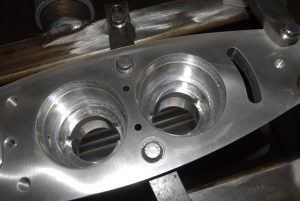 Top view of SCX gearcase with machined holes for downshafts. 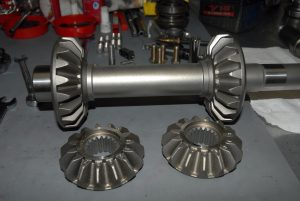