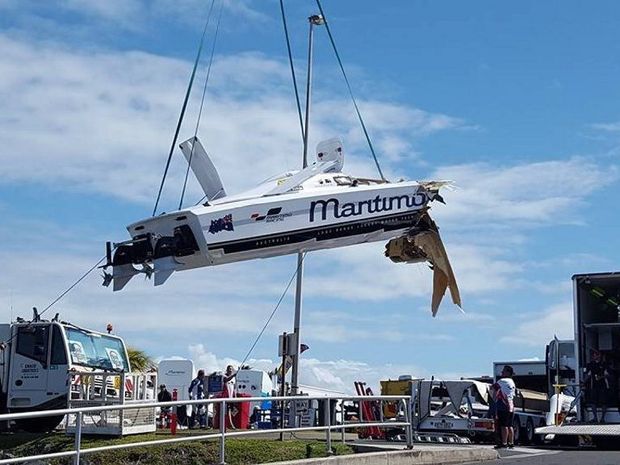 Maritimo 1000 suffered an incredible, adrenaline pumping crash on Sunday at about 11 a.m. during the Offshore Superboat Championships at Mackay Harbor.

In what is undoubtedly one of the most unique superboat crashes to date, drivers Andrew Searle and Andrew Willaton put the nose of the boat into a fairly sizable wave. Not an uncommon thing to do during such races. However, being a somewhat older boat with newer upgrades its fair to assume that the incredible stress put on the bow re-entering the water is what caused it to essentially snap in half.

A testament to the safety and preventative measures put into these high speed catamarans, the reinforced cockpit and six-point safety harnesses for each driver did their job and both men escaped unharmed with nothing other than what we suspect will be a few battle bruises.

When the Championships started in Bowen last month, Mr Searle and Mr Willaton won the first race in its class and came second in the second race.

“They had been doing very well and it’s a heck of a shame,” Superboat Offshore Championship Race DIrector Mr Embleton said.

(Images Courtesy of the Daily Mercury)