Home Brownie's Bites Brownie’s Bites: Living Aboard. How Much Fun Could One Possibly Have? 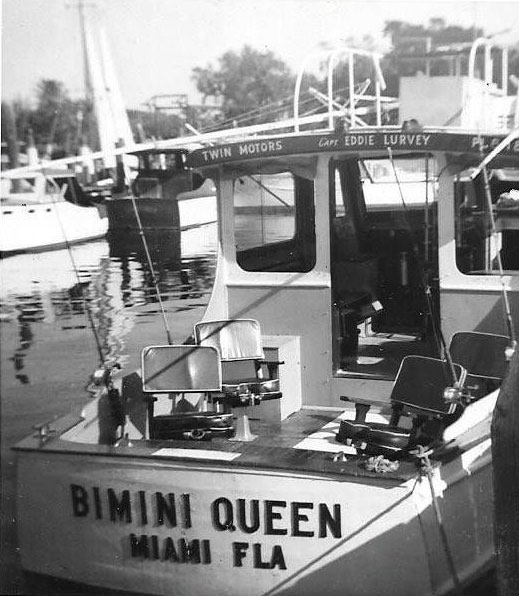 I didn’t start boating until I was two years old, in 1937. Our family was comprised entirely of hunters, fishermen, and people who had to clean and prepare all the stuff that the others killed or caught. It took me all the way to age two to figure that it was more fun to wander around with a gun or a fishing pole than to sit next to pile of newly-dead lifeforms (deadforms?). I was born in 1935, right at the end of the Great Depression, in Terre Haute, Indiana. Things were tough around there, but I didn’t know that. We fished in the spring and summer, hunted birds and squirrels in the fall, and rabbits in the winter. Rich people pay thousands of dollars to do those things now, but I got to do them for free. We hunted and fished professionally, supplementing my father’s salary to the point that we were able to build a summer cottage on the banks of the Wabash River. I actually fished with my Dad from age two, in our old johnboat. I guess the early start gave me a larger than average love of the water. I have lived aboard various boats for over 15 years full time, and countless weekends for my 81 years. People who live aboard have more fun than people who live in houses. There is a camaraderie that comes with the boat.

I was forced to go to college by my Dad, who, on learning that I had won an academic four year scholarship to Indiana State, gave me the option of being the first of our family to ever go to college, or, being the first to be killed by his father. My scholarship required that I Major in Elementary Education, maintain a “C” average, and teach in elementary school after my graduation. I had exactly as much enthusiasm for that plan as I did for flying backwards. I worked my way through the last year of high school and all through college as an outboard motor and bicycle fixer. I became quite adept at Johnson outboards, and fell into a timeslot that allowed me to grow with the post-war surge in boating. I found that my job was lots of fun, had nice customers, and paid more than teaching. It was 1956, and time for me to do something rash. I called my Johnson representative and asked him to find me a job in South Florida, to fulfill my dream of hanging out in the Florida Keys. He found me a job immediately at Challenger Marine, in North Miami, Fl. I spent a long time deciding to move to Florida (30 seconds). I packed my tools and split. I only knew one person in Miami, and he and I hung out together a lot, boating, drinking and chasing girls. I worked part time at Challenger at first, and did a lively repair business on the side. I saved enough money for a down payment on the Bimini Queen, a 38 foot, 1928 Elco charter fishing boat. She was docked at the Atlantique Charter Docks, next to the famous Castaways, on Miami Beach. She was owned by Captain Eddie Lurvey, a disabled WWII veteran, who was retiring from charter fishing. Dockage there was too expensive for my extremely limited budget, so I moved it to Nuta’s Yacht Basin, on the Miami River. Nuta’s was operated by Lou Nuta, Sr. and Jr. Both were famous boat racers. I loved to help them in the boatyard in return for a cut on my docking fees and to listen to their excellent stories. Lots of other boat racers hung out there too, and I tried my best to be one of the boys.

One dock over from the “Queen” was a new 24 or 25 foot plywood boat named “Cool Dual”, owned by Indy driver, Jim Rathman, and set up by Sam Sarra and Dave Stirrat. Sam and Dave (No, not them) both became famous in the marine business, with Sam Sarra developing the Turbocharged Daytona Chevy marine engines, and Dave Stirrat as Don Aronow’s partner in both Formula Marine and Donzi Marine. The boat was powered by the first ever pair of marinized small block V8 Chevies. In addition, “Pop” Nuta had a warehouse full of WWI and WWII aircraft engines, from Packard Marines, to Hispano Suizas, to Rolls Royce Merlins and Grifons. Allisons were everywhere, and a surplus V12 Allison 1710 from a P51 might be had for a couple of hundred bucks. A regular at the warehouse was Gar Wood, who was at that time, the most famous boat person in the world. I offered to help him remove some spare parts from a Packard engine in the warehouse. He told me to F**k off. He is one of the most famous people to do so, although there are lots of others contesting the title. Famous Italian hydroplane racer, Ezio Selva, headquartered there for famous Orange Bowl Regatta, 1957 vintage. He had a beautiful Italian Gran Prix hydroplane, with a supercharged Alfa Romeo engine. Very, very fast. Maybe too fast. Ezio was killed in the race. When they brought the boat back to the boatyard, there was perfect print of Mr. Selva in the engine cowling. You could almost recognize him from the dent.

I quickly gathered a clientele for boat and motor repairs, and met some of the movers and shakers of Miami society. One of my best contacts was Art Bruns, who owned the Miami Springs Villas, a sprawling hotel, restaurant and club in Miami Springs. Art was very nice to me, and hooked me up with lots of his boating buddies for my traveling boat fixing business. I went to the Cat Cay Tuna Tournament two years in a row, and made some big bucks fixing busted tuna boats. The most amazing thing that Art did for me, was to give me a full membership in the Club there. A side benefit of the Club was the fact that both Eastern Airlines and Pan American Airways had their stewardess training facilities on-site. Each “stew” had to stay there for several weeks, while learning to ignore customers, spill coffee, screw pilots, that sort of thing. They were bored. I felt terrible about that, and sacrificed myself by taking them, a few at a time for a cruise on the boat. A couple of them volunteered to be live-in crew, and I was too well bred to refuse.

The weirdest part of living there was the fact that the boat directly behind me was owned by Bill Crompton, of Bill’s Trading Post, at 36th Street and Le Jeune Road. I was a green kid from Indiana, and it took me a little time to understand the relationship between Bill and George Liberace, the flamer’s brother. George walked right past my Bikini clad crew, but always stopped for a beer when my more manly men friends were there.

Challenger Marine finally insisted that I come to work full time. Those days, no cell phones, beepers, etc. The boat yard didn’t do more than write a number down, and there wasn’t a pay phone near, so it was hard to get in touch with me. I gave in, and started full time as an outboard mechanic. My carefree life as a liveaboard was over for a while. In rapid succession, I was drafted into the Army, got my finger stuck in a wedding ring, had four kids, and became a real homeowning dad and husband. That was pretty good too…