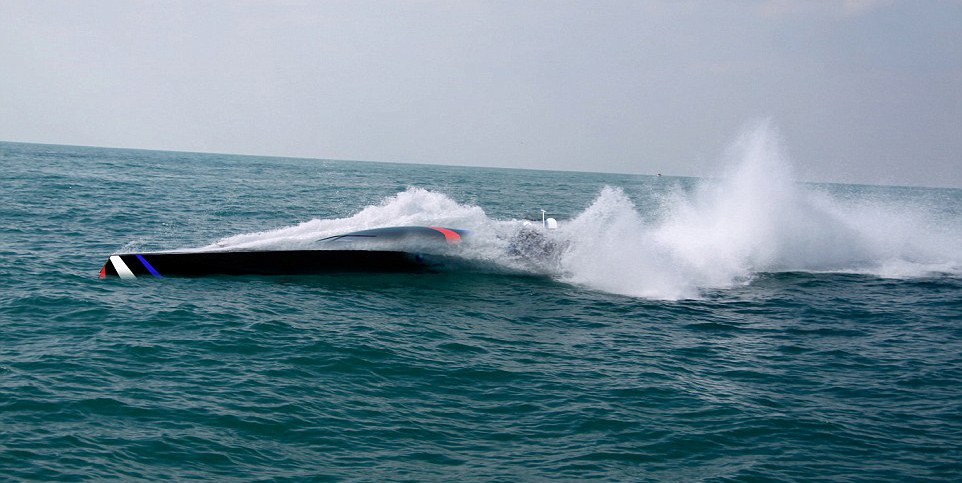 Have you ever taken a cruise to Europe? If so then you know, even at full steam it can still take up to a week to arrive at your destination port on the other side of the Atlantic. This relatively “quick” passage comes at the cost of hundreds and hundreds of gallons of fuel. These figures are in stark comparison to current Atlantic crossing record (2 days, 10 hours, and 54 minutes) held by the Aga Khan’s 220ft powerboat, Destriero in 1992. Keep in mind this craft carried no additional passengers. To businessman Richard George of Team Great Britain, this record can and will be broken. And he says his boat can do it while carrying passengers.

His team’s powerboat, which mimics the looks of both a catamaran and a jet, runs 112ft long and holds a seven-man crew. With a state-of-the-art carbon fiber design, the crew will attempt to make the crossing between Cornwall and New York in just 48 hours, averaging 65mph. Even more impressive is the fact that they plan to do it on one tank of gas.

“It will be a wave-piercing catamaran that, given the right conditions, will be able to complete the crossing in 48 hours, while using a fraction of the fuel of former competitors,” Richard said. “The idea is not only to win the record back for Britain but to develop a boat that will go on to influence the industry in terms of efficiency.”

The $22 million project is set to come to fruition in the summer of 2018, and Mr. George has assembled a crew worthy of such an endeavor. These crew members include some of the biggest names in powerboating such as 82-year-old Dag Pike, Branson’s navigator in 1986, and Dan Stevens, the current owner of Virgin Atlantic Challenger II. Stevens sees this as a way to bring awareness to the inefficiency of powerboating as an industry.

“The boats are built for power and speed with little thought to how much emissions they pump out. “It got me thinking that there had to be a way to do something based around efficiency that gave off a positive message. “It’s always been something that interests me but to do it these days you have to have a boat that is not only fast but also very efficient.”

With a few years left to prepare, we’re excited to see what else the team can come up with in their attempt to make history!