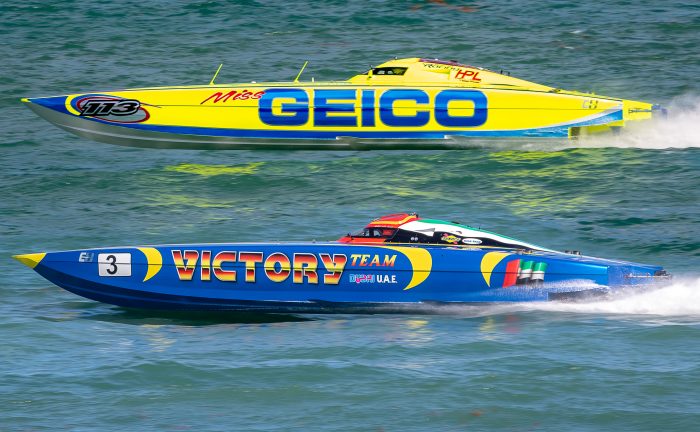 In a virtually unheard of series of events, two Class One offshore competitors—the Victory and Miss Geico race boats—rolled over within seconds of each other during the final two turns of the 35th Sarasota Powerboat Grand Prix, dramatically bringing the day’s worth of racing to an abrupt conclusion.

All team members were able to safely escape their boats: driver Salem Al Adidi and throttleman Eisa Al Ali (who had been in the lead) and driver James Sheppard and throttleman Steve Curtis of Miss Geico.

This would seem to indicate that #222 Triple 2 Offshore, featuring driver Darren Nicholson and throttleman Giovanni Capitella (who had been in the third-place position) would be named the winner of the race, but nothing was official as this story was being prepared.

Also participating in the race were #11 Scuderia Cazzani Turbo (with driver Ed Smith and throttleman Serafino Cazzani) and #77 Lucas Oil Satcom Direct (with driver Jay Johnson and throttleman Nigel Hook). It was not immediately known how exactly the podium would be configured in the wake of these shocking developments.

Some teaser footage of the British Virgin Islands