Home Powerboating News Still Waxing Your Boat? Ceramics Is the Wave of the Future

Every boat owner wants his boat to achieve optimal performance, and usually that’s the #1 topic on Powerboat Nation. But boat owners also strive to keep their boats looking in tip-top condition as well. That’s where Joel Accuardi comes in.

For the past several years, Accuardi has been helping speedboaters transition away from wax/polymer-based products for boat protection to a longer-lasting, 21st century technique that’s redefining high-gloss polishing. Accuardi is the owner of The Ceramic Company, a Dallas-based firm that is totally revolutionizing the very concept of keeping boats in pristine condition. The company has been applying its protective coating to boats across the country through its dealer network, and word-of-mouth has been insurmountable. In addition to lasting much longer than a typical waxing, the process protects against UV damage, oxidation, corrosion, staining, seawater, scum, chemicals, fuel and practically anything else that Mother Nature—including birds—can throw at your boat.

Accuardi, who has been detailing boats since he was 18 years old, made it his goal early on to shake things up in his field. “I’ve always been looking for a technology that would better serve the marine industry and provide something a little longer-lasting than just a buff and wax,” he says.

That dream was realized with the creation of a product that protects all surfaces of a boat with a ceramic that results in a beautiful, long-lasting shine. After mastering the technique while working for others, Accuardi and his partner, Ross Gold, launched their own firm, The Ceramic Company several months ago, and began assembling a dealer network.

“The best way to describe the product is like wax on steroids, except that it can be applied to any surface of your boat, above and below the waterline, the engines, your decks, vinyls, plastics, everywhere,” he says. “And the longevity far exceeds any wax system, which usually gives you 60 to 90 days of shine. With The Ceramic Company’s Marine Coating, it’s more like 18 to 24 months.”

In addition to the long-term benefits, Accuardi points out that in the short term, The Ceramic Company’s Marine Coating greatly eases the chore of cleaning. “Even sitting in a marina not being used, a boat can really accumulate all sorts of filth,” he says. “This application makes cleaning and reviving the shine so much easier.”

Just ask Accuardi’s customer Tyson Garvin, whose 50’ Skater has had full ceramic coverage. He recalls taking the boat to Skaterfest last August, where the boat had to sit in a slip for several days, owning to a mechanical issue.

“With all the oil that was in Lake St. Clair, it had developed quite a scum line,” Garvin says. “This was in the middle of summer. I didn’t wash it. I then hauled it over to the Skater factory, which is on the other side of the state. It sat there for about three months as the stuff dried on the side of the boat. If you don’t wash it as soon as it comes out of the water, you’re screwed. Finally, when I picked up the boat to start working on it again, I walked over to the very visible scum line and made one pass over the side with a dry rag. And all of the buildup vanished.”

The basic cost of coating your boat with the ceramic is around $65 a foot; the price may vary depending on the size, complexity and condition of your craft. The Ceramic Company has been successfully conscripting professional installation centers and detailing shops across the country to work with the product. Then, over the next few months, the next goal will be to set up a consumer-grade house line. “We’ll be able to do people’s fridges, countertops, barbecues, etc.,” Accuardi says. “At some point we will introduce a consumer line for the marine industry, but for the time being, it’s strictly professional only.”

For more information, visit the Ceramic Company by clicking here. 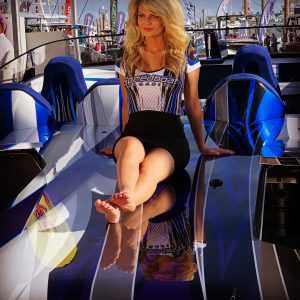 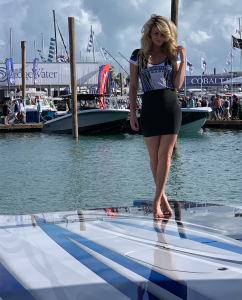