In the second of three days of competition, the 2019 Key West Offshore World Finals entertained fans with four races in a variety of classes.

In Super Cat class, Dependable Offshore grabbed the early lead but quickly dropped back to fourth place before bowing out of the race completely. That left Broadco, a 40’ MTI with driver Chuck Broaddus and throttleman Chris Hanley (see photos below), to take the lead. They stayed out way in front for the remainder of the race and took the checkered flag handily. They were followed by Pro Floors Racing, WHM Motorsports and M-CON. Performance Boat Center/Jimmy John’s suffered a mechanical issue and left the race after the seventh of 10 and 3/4 laps.

With Huski Chocolate suffering from engine problems and out of the picture, Extreme class was left with only two competitors—one of which, Team Freedom, dropped out after completing only one lap. That left Team CRC, winner of Wednesday’s race, once again taking the checkered flag.

Two Super Stock competitors, LPC and Team Allen Lawn Care, had wrecked on Wednesday, narrowing the field to eight boats. FJ Propeller had been in the lead during Friday’s fifth lap when Jackhammer blew over, causing a red-flag situation. The two pilots, Reese Langheim and Ricky Maldonado, quickly emerged (mostly unscathed), and racing was suspended after the boat was towed off the course, after which it was restarted for three additional laps. At that point, CR Racing grabbed the lead and finished first, followed by Shadow Pirate and Performance Boat Center/Auto Alert. (It was the identical podium finish as Wednesday’s race.) FJ Propeller ended up finishing fourth. 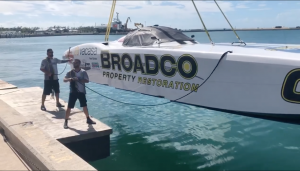 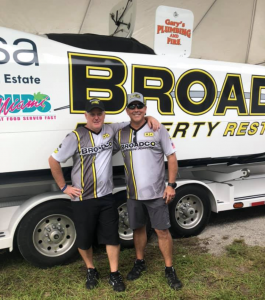