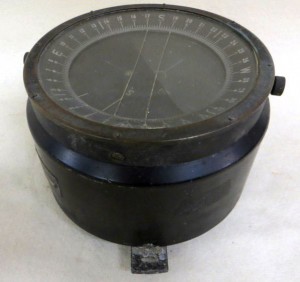 My consulting job on a new high performance boat building project takes me to TNT Marine, in North Miami, Fl. from time to time. TNT is the top high performance marina on the planet. A couple of days ago, I met a fan from the “good old days” of offshore racing. He was a couple of generations behind me, but knew a lot about the old boats and crews. He showed me his ‘family pleasure boat’, which was 50 MPH faster than my speedy 60’s Formula 233 race boat. Technical achievement and advancement is running wild in the boat business. My old Formula was powered by a 427 ci Ford Interceptor, with 400 so-called horsepower. The boat had a vee drive, and was the third Formula ever built. Talk about your high tech! It was competitive for the day, and finished 2nd overall in the first Gateway Marathon, from Palm Beach to Lucaya, in the Bahamas, and back. It was 2nd overall in the 1964 Bimini Handicap, from Miami to Bimini, Bahamas and back. Winner of the first leg of the Bimini Handicap was Gar Wood, and his son Gar, Jr. in their self-built 48’ “Orca”, powered by a pair of 1710 HP Allison aircraft engines. Gar, Sr. was older than dirt, but he was at the controls at the start of the race.

The only compasses that could stand the gaff in those days were the D12 “Bomber” WW2 aircraft compasses. They were marvels of construction and accuracy, but they were not well suited for offshore powerboat racing. They utilized a crosshair arrangement on top of a flat lens, which meant that they were best viewed from the top. The logical location for best viewing was between the feet of the viewer. At each course change, the crosshairs had to be rotated to the new course. Quite a chore at high speed in rough water! All the races started a 7 AM in those days, and, in the dim light, it was difficult to see the heading. Lots of injured ankles and chins. 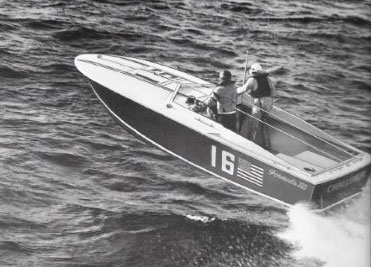 True story: In the 1964 Miami-Nassau race, there were nine Formula 233 race boats. Don Aronow had stepped up to the Formula 275, for a better shot at overall victory. He sold his 233, powered by a factory Mercruiser 409 ci on a stern drive (instrument of the devil) to George Peroni for the race. Other 233’s were: Jim Wynne, twin racing Volvos, Billy Shand-Kydd, Lady Di’s uncle, Lord Lucan, heir to the “Charge of the Light Brigade” family, Bill Wishnick, Chairman of the Board, Witco Chemical Co., all in Turbo Daytona powered 233’s, and Stu Jackson and Jim Meyer in stock Volvo powered Formulas. It was rough. Seas in the “hump” were about five feet, head on. Wynne was the first of the 233’s into Cat Cay, the first checkpoint, behind three 31’ Bertrams. Since we were in a new country, we had to clear Customs and Immigration! The Bahamians had prepared out papers, and wrapped them around rocks, to be thrown into the boats as they came by the Customs dock. Upon leaving Cat Cay, we raced across the “flats” at WFO in the relatively calm, shallow water to the check boat at Sylvia Light, about 15 miles away. The check boat at Sylvia Light was “Red Witch”, a beautiful 32 foot Chris Craft cruiser. Owners Art and Viola Perry threw us a six-pack of Heinekins as we passed. Red Witch and the other check boats had agreed to stay on site for 48 hours, to communicate and assist in recovering ‘lost sheep’. Great dedication by those guys. The radios in the race boats were a joke! Mostly 45 watt Pearce Simpson, double sideband. At the end of any rough race, one could shake the broken tubes out like a salt shaker. 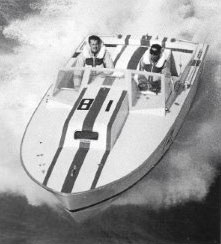 After Sylvia Light, we turned due east toward Northwest Channel light, on a course of 90 degrees, about 60 miles away. My co-driver, Jake Trotter, and I correctly reckoned that we were running second in Class 2, behind Peroni in Aronow’s old boat. We were inboard and he was instrument of the devil, and he was a couple of MPH faster in smooth water. We roared (well, sort of) across the flats, eating fried chicken, drinking green beers (mandatory in the smaller classes in those days), and wishing a pox on our friend, George Peroni. Halfway across the flats, Jake said “Hey, Pard, it looks like we are catching somebody”. I looked up from my cooler and saw a splash coming straight toward us. It was our nemesis, Peroni, racing straight at us! He had stopped to switch fuel tanks, and with the sun directly overhead, the only course reference was the D12 compass. He lined up the crosshairs backwards, and ran directly the wrong way. By the time he recognized the error, he lacked fuel to get to Nassau. We won Class 2, Wynne won Class 3, 31’ Bertrams finished 1,2, and 3 for the last time, and the Formula team finished 4,5,6,7,8,9 and 10th.

Most of the boats ran bronze stock propellers in those days. A few had a new metal, Ni-Bral, which was stronger than bronze. No one had stainless steel. One learned to “throttle back”, when the boat left the water, or face disaster. In November, 1965, I was driving with Billy Wishnick in the 28’ Donzi “Broad Jumper” in the Miami-Key West race. The Key West race was the final for the year, and also would settle the U.I.M. World Offshore Championship. One of three entrants in the race would win the title. Dick Bertram, Don Aronow, or Bill Wishnick had accumulated enough points in races around the globe to vie for the title. Aronow had 13 points, Bertram and Wishnick each had 9. The final race was 9 points, so the usual list of what ifs showed that if Aronow won, he was it. If Bertram or Wishnick won, we had to keep Aronow out of 2nd or 3rd place. It was the most important race that any of us had ever contested. 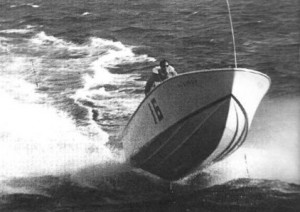 Bobby Moore, Mark “Big Dirty” Raymond and the crew at Donzi worked like dogs to get the boat ready for the big race. We installed a special pair of Holman Moody racing engines, changed the gear ratios and props, lost weight, quit drinking for over four days, and gained a little speed. For the first time, when the flag dropped, we were the fastest boat in the race! Our competition, Aronow and Bertram had also made maximum efforts. Bertram’s big 36’ Diesel would run 60 MPH, which was the same as Aronow’s cut-down 28’ Donzi, “008”. We could run 63 at the start of the race. For a change, the weather at the start of the race was flat calm! We were ecstatic. Wishnick had made some sizeable bets on who would be first out Government Cut at the start of the race. We stayed back at the start in Biscayne Bay, in order to pass everyone in the Cut, in full view of our fans. The last boat to pass was Bob Collins in the beautiful 31’ Prowler, “Black Caesar”. We passed close astern, for giggles, and as we took the lead, the propellers barely cleared the water. When we landed, we had lost 100 RPM’s. My heart sank. I know instantly that our props were bronze, not Ni-Bral. With standard, tapered propeller shafts, there was no way to change the props in a timely manner. We had to soldier on. The good news? We could just maintain the lead. The three boats ran within a few hundred yards of each other. At Alligator Light, near Marathon, Fl., Aronow dropped out. We had not yet stopped smiling at Aronow’s misfortune, when we threw a blade off the portside propeller. End of smile. We had no choice but to keep the throttles pegged. The port engine went up to 6600 RPM’s, and set up a harmonic in the boat that affected everything that was bolted together. We watched in awe as the controls fell apart, the compass foamed, gauges went nuts, the CO2 fire extinguishers went off, our feet went to sleep, and our championship dreams died, as Bertram crept past near the finish. Bertram won, we finished second in a cockpit full of junk.