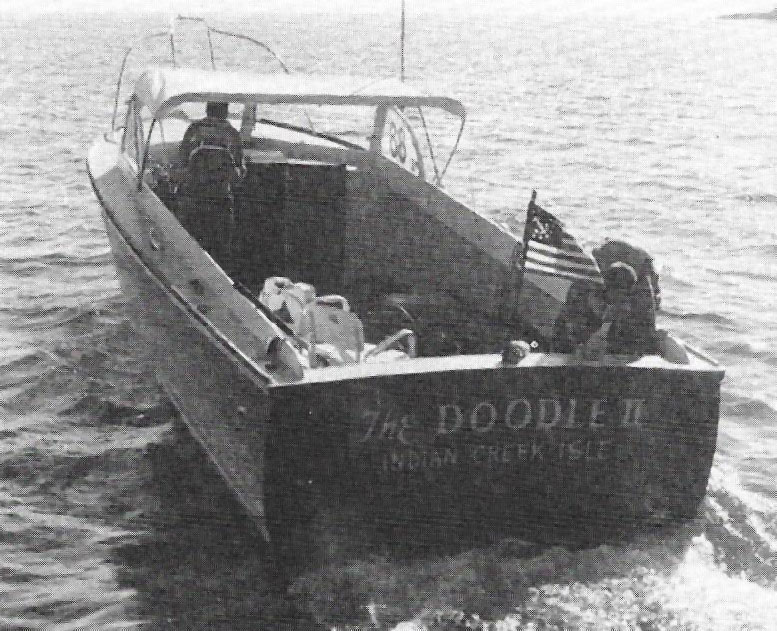 The big, rough man leaned forward a bit, bobbing smoothly to the rhythm of the movement beneath his feet. Holding the steering wheel in one hand, and the throttles in the other, he had a natural rhythm for the task ahead. Behind him, the sound of thunder welled up in his ears, resulting in a brief grin across his weather beaten face. “The motors sound OK” he thought to himself. It was 7:30 in the morning, on May 6, 1956, and the sun had just given up on its task of breaking through the overcast. Miami lay behind, and Cat Cay was 48 miles ahead across the rolling, lumpy Gulfstream. Sam Griffith grinned a toothy grin at his co-pilot and said “Goddammit, Dick, we’re gonna run this sonofabitch ‘til it wins or sinks!” The co-pilot replied “I don’t think this little boat will take the pounding all the way to Nassau in these seas if we don’t slow down a bit.” The “little boat” was a 34’ Chris Craft ‘Sea Skiff’, powered by a pair 0f 215HP Cadillac Crusader engines and named “Doodle II”. Top speed was only 28MPH, fully loaded, but that wasn’t too shabby for 1956. With fuel stops at Cat Cay and Frazer’s Hog Cay, it would take all day to get to Nassau, Bahamas and the finish line. Sea skiffs were built of multiple planks of plywood, riveted together. On smashing into a big sea at speed, rivets would come loose and shoot out, causing the flying fish alongside to take evasive action. By the time they would reach Nassau, 56 of the rivets would be in Davey Jones’ locker, with little showers squirting in, like a Bugs Bunny cartoon. In a later race to Bimini and back, Sam chopped the transom out to allow the water rushing in, to rush out at the same speed. He radioed Beach Boat Slips to have the slings ready, and plopped onto them to avoid the ignominy of winning and sinking.

This was the very first Miami to Nassau, Bahamas power boat race, on May 6th, 1956. The balance of the small field was made up of local boating luminaries, including Forrest Johnson, famous builder of Prowler Boats, one of the best known high performance (well, sort of) cruisers. Soon to be Indy winner, Jim Rathman, had his plywood Abbey Hurricane, with the very first pair of marinized small block Chevy V8s. Every entry in the race broke something. In Rathman’s case, it was a leg. He may have had the shortest offshore racing career in history. Sherman Critchfield and Tommy Gore were circle racers of note, trying their luck on the briny. Local boatbuilder Woody Woodson had a Dick Cole designed Thunderbird 18’ cathedral hull with a pair of fire breathing 35 horsepower Johnsons. They even had the first ever foreign entry, Ole Botved, from Denmark, in a little outboard Coronet.

The course for the race was out Miami’s Government Cut (In order to give both spectators a good look at the fleet) to Cat Cay, in the Bahamas, where one must enter the harbor, Mon, to go through immigration and Customs. Fortunately, that was handled by having prepared documents wrapped around a rock, and hurled into each boat. Sam also had a 55 gallon drum of gasoline “hurled” into the Doodle II, in order to have enough fuel to make it Frazer’s Hog Cay, the next fuel stop.

After Cat Cay, the next checkpoint was Sylvia Beacon, named after Ms. Sylvia Beacon, local Bimini hooker, who must have had something to do with all the navigation aids around the Bahamas. Lots of them are named after her. There was a check boat at Sylvia Beacon, anchored there for 48 hours to clock the racers as they sped by. The course from Sylvia to Frazers Hog Cay, about 90 miles away, was across the “flats”, with depths averaging 2 fathoms, about 12 feet. While the shallow depth kept the seas from piling up in a stiff wind, the chop was short and steep, and could damage a lightly built boat. Halfway across the flats, Dick Bertram was steering while Sam Griffith inserted a pump into the barrel of gasoline. Sam stroked 25 gallons into each side tank and rolled the barrel up onto the transom. Dick called out to Sam not to toss it overboard, as it would be a hazard to navigation. “Not to us!”

By now they were approaching Mama Rhoda rock, near Frazer’s Hog Cay in the Berry Islands, and running all alone, out in front. Co-pilot, Dick Bertram, was driving while Sam rummaged in the cabin for something to slake their thirst. What a surprise! Wrapped in Sam’s clothes, in his suitcase, was a bottle of Haig and Haig Pinch 12 year old Scotch that Sam had brought to celebrate their victory. He uncorked it, and offered the first drink to Bertram. “Goddam it, Sam, we haven’t won yet, and this might jinx us”. “Look at it this way, Dick. If we break down, we might never get to drink this beautiful bottle of Scotch”. Dick. “Well, I guess one teensy little sip couldn’t hurt”. By the time they rounded Bird Point, and headed for the finish line thirty two miles ahead in Nassau Harbour, they were singing sea chanties, and toasting their victory.

They roared into Nassau Harbor, between New Providence Island and Hog Island and down to Yacht Haven, the finish line. A tiny band of spectators waved and cheered as the winning team of Sam Griffith and Dick Bertram crossed the finish line in after 9 hours, 20 minutes. Promoter Sherman “Red” Crise announced that the fabulous 19 mph average speed would stand for years. Dick and Sam looked for a hoist to haul the badly leaking boat, and killed the bottle of Haig and Haig. “We gonna do it again next year?” “Nahh, it’ll never catch on…”