Yesterday, Powerboat Nation reported that DCB Performance Boats was en route to deliver its latest M44, Bananas XL, to repeat customer Dave Magoo of Lake Havasu City, AZ. Today, the boat saw water for the first time as Magoo and DCB’s Tony Chiaramonte launched it and took it for its maiden ride.

“During our first run, we saw 119 or 120, something like that,” Magoo told Powerboat Nation. “I’m breaking the boat in, so I’m not in any hurry to run it hard. But the boat runs really, really good. It handles incredible, and it handles better than my 35—it turns better, too. It runs so flat, it’s unbelievable.”

The Bananas XL project began when Magoo gave DCB carte blanche to build the wildest, options-heavy craft they could devise. “He kind of gave us a blank check and said, ‘Let’s see what you’re made of,’ and I think we stood up to the challenge,” says DCB’s Tony Chiaramonte. “It’s probably the most creative, crazy project we’ve ever done.”

Prior to delivery, the boat was displayed at the recent Los Angeles Boat Show.

Some of the boat’s dozens of options include:

• Twin Mercury Racing 1550/1350 dual-calibration engines capable of reaching speeds of 180+ mph in 1550 mode.
• Air conditioning on the engines to keep them cool.
• Temperature-controlled seats.
• The seats go up and down and back and forth.
• The elaborate cabin features a dropped ceiling.
• A cooler that doesn’t need ice—just plug it in, and it keeps things chilled to 37 degrees.
• RGB lights on the command screens.
• Colors on all lights may be changed, including under the tunnel and under water.
• Lights and cameras on the sea strainers.

Asked which of the boat’s features most blew his mind, Magoo said, “How it handles. The boat turns so hard, even at 30 mph. It just handles so well. It does not feel like that big a boat. It’s mind-boggling.”

Magoo added that the boat’s air conditioning system, while perfectly operational, was not needed in mid-January, even in Arizona. “It’s already ice cold out here. It was 44 degrees when we took off.”

Magoo says that he and wife Buffie plan to attend at least 11 poker runs this year, “so the boat will be going everywhere,” he says. “We’re going to do LOTO, Desert Storm, the Emerald Coast run, Thousand Islands, Texas Outlaw, Powell, Big Cat, Miami in November, and that’s just for starters.” 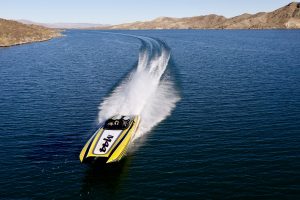 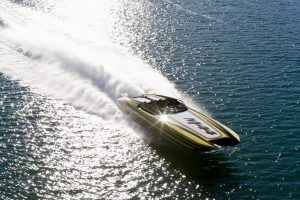 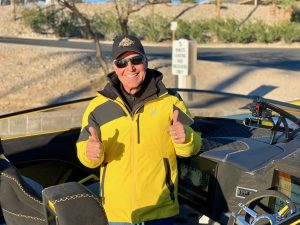 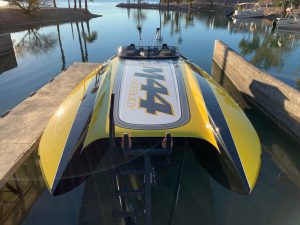 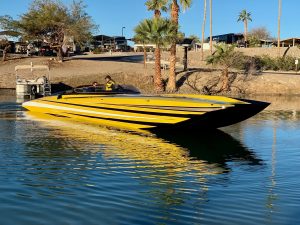 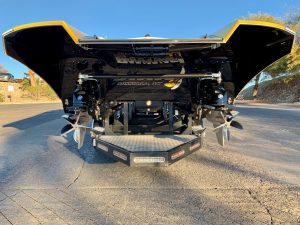 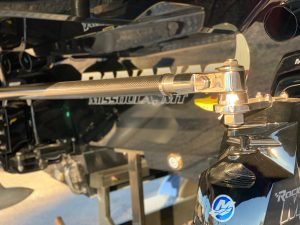 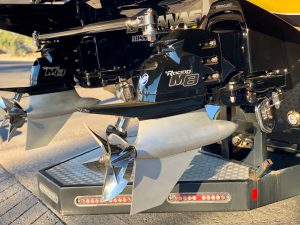 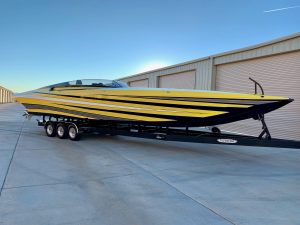 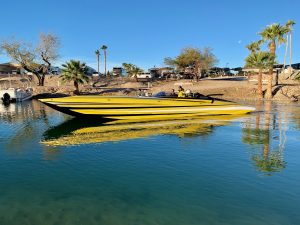