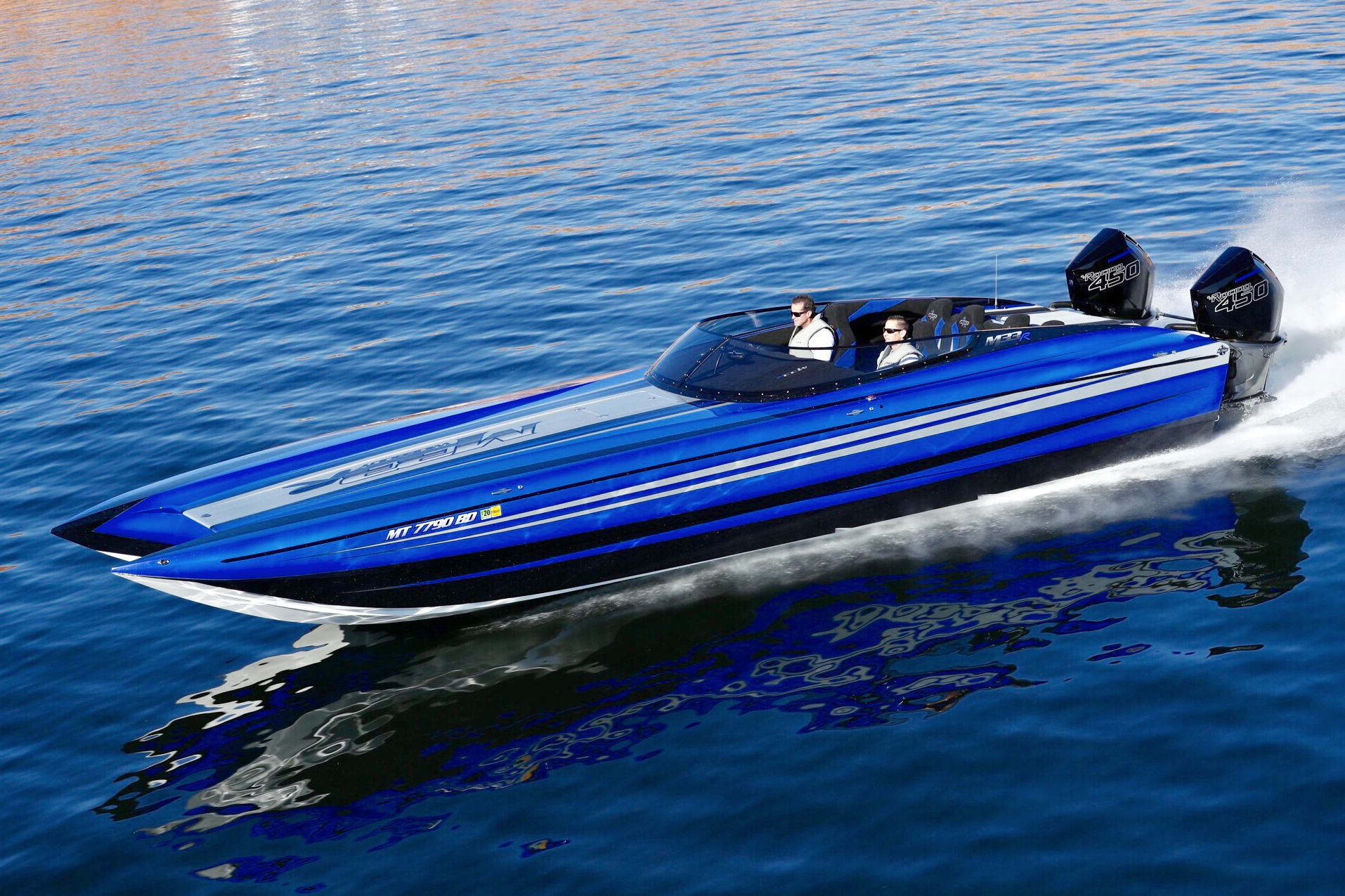 DCB Performance Boats of El Cajon, CA, has delivered a new M33R to repeat customer Greg Timmons of Southern California. Previously the owner of a DCB M28 with Mercury Racing 400Rs, Timmons ran the boat for the first time during this past weekend’s Lake Powell Challenge. This is DCB’s first boat to be outfitted with the new 450R outboards from Mercury Racing.

The M33R is part of DCB’s Widebody family, due to the 9’7” beam it shares with the builder’s M31 and M35 models. “The Widebody aspect makes the 33 a very stable boat,” Timmons says. “DCB’s detail and fit and finish, I believe, are second to none.”

Not surprisingly, the 450R proves to be an idea powerplant for the M33R. “It has a quite a bit more punch to it, and a lot more torque,” Timmons says. “We have some friends with an M33R powered by the 400Rs. We ran up and down the lake together and I would pull away from them. Then he suggested that we start at an idle and do a drag race. I got on a plane faster, and then just kept pulling away from him. He was curious to see what it did.” (According to Timmons, his friends have ordered a new M33R with the 450R package.)

Still, the Lake Powell Challenge may not have been the ideal locale to measure the full extent of the M33R’s power. “The elevation there is about 4,000 feet, so you lose quite a bit up there,” he says. “Also, I had my two daughters and one of their boyfriends in the boat, so I wasn’t going for the big number. But Tony Chiaramonte at DCB ran it at Lake Elsinore at 125 mph. That speed is still on my GPS!”

The versatile Timmons, 59, became a loyal DCB customer after owning a number of boats, including both vees and cats—in both I/Os and outboard configurations—from builders on both coasts of the USA. His inroad to performance boating was launched with a Stoker 22 Sport Tunnel outboard; that was followed by a Hallett 270-S vee, then two Hustlers (a 41 Razor and a 388 Slingshot).

Nothing he’s owned so far can beat the outstanding performance of the M33R, and the great relationship he has forged with the team at DCB makes the experience all the sweeter. Timmons says he was “very involved” in customizing his new boat, including the graphics package. “At the beginning of the process, Jeff Johnson would talk to me about what colors I liked,” he says. “Then he’d go to his graphic artist and send me various images. We went back and forth maybe 10 times before we finalized the look of the boat.”

Timmons plans to run the DCB in Lake Havasu, and in the cooler months, he hopes to see 127-128 on the speedo. He’s the only designated driver of the DCB, although his other family members are free to take the wheel of the Timmons’ outboard-powered Bennington pontoon boat, which is the craft du jour during holiday weekends like Independence Day, Labor Day and Memorial Day. “We can fit all of our family and friends on it. It’s a great boat.”

The owner of a Long Beach, CA-based Volkswagen and Subaru dealership, Timmons boats with his wife, four kids and two grandchildren. Look for the M33R at next year’s Desert Storm Poker Run & Shootout, as well as the Big Cat Poker Run.