Home Powerboating News L.A. Boat Show Sneak Preview: Who’s Bringing What
For the 64th year running, the Los Angeles Boat Show will promote on-the-water fun, with a healthy dose of muscle machinery on display at the “High Performance Powerboat Hall.” The Southland’s leading go-fast powerboat manufacturers will be exhibiting their latest beauties with their flashy paint jobs, plush interiors and powerful engines. Here’s a sneak preview of what you can expect to see when the doors open at Pomona’s Fairplex facility on Thursday, Jan. 9: 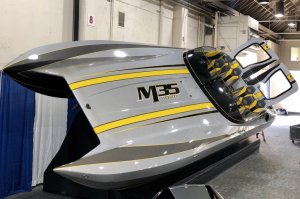 Montclair, CA-based Cobra will be displaying one of its 280W Pythons and two 230 Razors. Cobra has made the decision to shows these boats minus power. “We didn’t want to dedicate a specific motor, and give anybody a reason not to buy the boat,” explains General Manager Hernando Rodriguez. “Base motors are base motors, but people almost always upgrade. They’re going without power so people can pick their power.”
The 230 Razor has always been a great seller for Cobra, and “we wanted to go to the show with some more affordable boats that are on special,” Rodriguez says. “They’re all for sale—none of them are customers’ boats.”

NORDIC / HALLETT
Nordic Boats of Lake Havsau City, AZ, will combine both Nordic and Hallett brands in one massive booth comprising numerous models. Here’s what they’ll be displaying:
* Nordic 48’ Poker Run (vee bottom)
* Nordic 31’ Flatdeck (catamaran)
* Nordic 35’ Flatdeck (catamaran)
* Nordic 26’ Deck Boat
* Nordic 29’ Deck Boat
* Hallett 210
* Hallett 255
* Hallett 275
The first two boats on the list, the 48’ and the 31’, are new boats from Nordic and will be making their debut at the L.A. show.

LAVEY CRAFT
Lavey Craft of Corona, CA, will be showing two of its models, the RPM 26 Redline by Lavey Craft catamaran, as well as its 29 NuEra vee bottom (closed bow). The 26 is powered by a single Mercury Racing 700 SCi with #6 drive, while the 29 NuEra—described by company President Chris Camire as “a very vibrant, very pretty boat”—is being built for a customer without power.

CALIBER 1
Caliber 1, the Lake Havasu City, AZ-based builder, will just have one boat on display: its 230 Velocity, which is powered by a Mercury 6.2L V-8 engine. The model was reviewed in Speedboat Magazine’s April 2018 issue, where it was described as “the perfect boat for an entry-level user, and it’s one of the better-priced ones we’ve seen.”

BARRON
Barron Boats of Azusa, CA, will debut a new model at the show: the 190 RS, a vee hull, will join Barron’s 290S deckboat as part of a growing lineup. The 190 RS is a single-engine ski-racing machine set up to handle outboard, jet and V-drive engines. It’s described as a “highly flexible hull for your dream build,” featuring wide interior space that can accommodate up to seven or eight passengers. Company President Jerry Barron will display both the 190 RS and the 290S deckboat.

EDDIE MARINE / LIVORSI MARINE
In addition to all of the cool boats, there will also be some incredible high-performance accessories on display. Many of them will be available to see at Eddie Marine’s booth. They’re planning to bring their popular EMI Thunder Exhaust system, trim tabs, gauges, seat pedestals and other parts. Also be sure to check out the enormous Livorsi Marine display, with gauges, instruments, wheels, hydraulic trim tabs, LED indicators and numerous accessories.