The streak began in 2015, with a 208 mph run (with Myrick Coil and Cosker in the cockpit), followed up with a blistering 217-mph run in 2016 by Battiato and Cosker. With the course shortened to 3/4 of a mile in 2017, the duo hit 204 mph both that year and in 2018. This year, the boys had to settle for 201 mph, because the boat (powered by quad, piston-powered Onken Racing custom engines with around 9,000 hp) threw a propeller blade that damaged its hull when they sought a better number. But it was enough to earn them a “five-peat,” as no other competitor broke the 200-mph mark.

Performance Boat Center made a strong showing, with three different raceboats: The retired Jimmy John’s Skater hull, now privately owned by Ron Szolack; the Auto Alert Super Stock competitior, a 32′ Doug Wright hull, and the current Jimmy John’s MTI, the last of which participated in an exhibition run dueling with a stunt plane. PB Center also hosted an elaborate party, attended by hundreds of people, all of whom enjoyed a massive display of fireworks.

Event organizer “Captain Ron” Duggan said this 31st annual event—which comprises a street party, poker run, silent auction and other activities—went off extremely well in 2019, “especially the participation in the poker run—our numbers were way up on that,” he told Speedboat Magazine. The LOTO event raises cash for more than 35 charities and organizations. Duggan said that $357,000 was raised in 2019.

Among the Shootout participants: 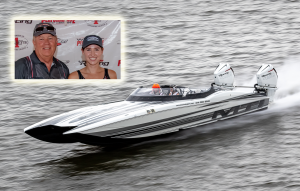 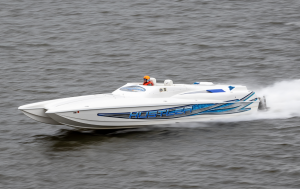 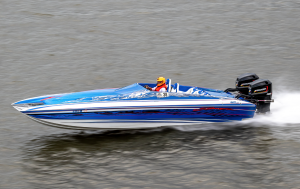 Tom Kennedy made four passes in his 28′ Skater and wound up with a top speed of 119 mph. 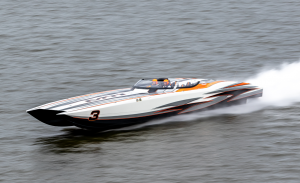 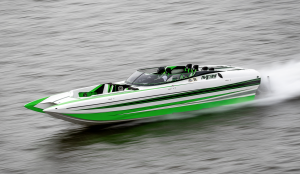 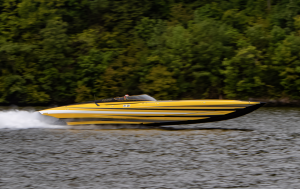 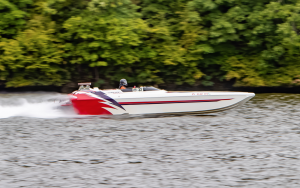 Larry Wiser, driving an Eliminator, achieved a speed of 111 mph. 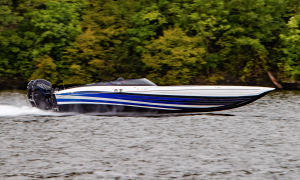 Brad Benson, in DCB M33R Widebody powered by a pair of Mercury Racing 400R outboards, achieved a speed of 113 mph. 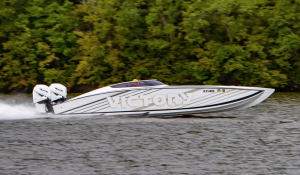