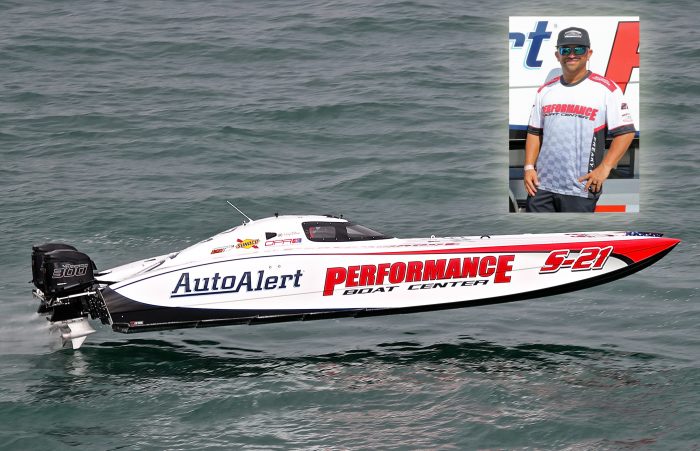 Here’s the second in our new series, PBN Profiles, in which we showcase notable figures in the world of powerboating.

Originally from Mackinaw, IL, Coil moved to the Lake of the Ozarks in 2000. He was working as a swimming pool installer and electrician on grain elevators in Central Illinois when a friend got him interested in the world-famous Shootout. The experience left him so enthusiastic about powerboating that he vowed to do whatever it took to get involved in that world. So it was off to tech school, where he took up studies at a marine training facility called the Lake Career and Technical Center in Camdenton. While in school, he also worked on a variety of boats and engines at a shop called Advanced Marine. Upon completing his education on all boat and engine types—and doing extremely well—he competed in a Vocational Institute Clubs of America competition in mechanics and took first place in the national division.

During his stint at Advanced Marine, Coil got his first taste working on performance boats—Fountains, Skaters, and even some boats powered by Sterling engines. “The go-fast stuff was really the most exciting to me, but I’d get those in between bass boats and runabouts. It really did help to broaden my knowledge across the scale,” he says. During this era, Coil’s bosses included Matt Patterson and Steve Wallace. “They really took me under their wing,” Coil recalls. “Steve Wallace is still one of the best mechanics I’ve ever worked with, and Dave Scott was one of their customers.”

Working on Dave Scott’s boats proved to be  a major turning point in Coil’s career. In the early 2000s, Scott owned a Sterling-powered pleasure boat—a 36’ Skater called Nauti Girl—that could go 180+ mph. Working with Coil, Scott decided to build a canopy-powered Skater to run in the shootouts, and maybe the occasional race. That boat attracted the attention of Anheuser-Busch, which offered Scott an opportunity to campaign it in offshore racing’s Extreme class.

With Scott’s star on the rise—and a growing number of boats to service and care for at his Nauti Marine facility, including Skaters, MTIs and a C5000 Mystic—he needed a full-time team member to put in charge of it all. “We were just constantly doing stuff,” Coil says. “Even though I was still really green, he invited me aboard as a full-time team member to take care of the boats.” Scott would eventually go on to become the world’s fastest offshore driver, his Budweiser Select teams sponsored by Anheuser-Busch. So Coil made the jump from Advanced Marine (with their blessing) to Scott’s Nauti Marine facility.

Coil started out as a crew member on Dave Scott’s fleet, meeting numerous current and future offshore superstars along the way. One of them was John Tomlinson, who had launched his own offshore career in 1986 and whose list of speed records, national and world titles is seemingly endless. Coil worked hard to prove himself, and the team quickly took notice of his abilities. “So they’d give me bigger and bigger jobs, and when their crew chief left to work in the NASCAR circuit, they moved me to crew chief.”

Working closely with a crew that included Lowell Bodenbach, Mike Powell and Clinton Milas, the team took care of Scott’s fleet for years. “We won a lot of world titles and national titles,” Coil says. “Eventually, as Dave got older and wanted to get out of the boat, he started putting me in there with Johnny every once in awhile. A lot of the time, people didn’t realize that I was the driver. But I really didn’t care, because I just thought it was so cool being in one of the baddest boats on the planet.” Back then, Coil was in his late 20s and participating in both the Superboat International (SBI) and Offshore Super Series (OSS) groups. “OSS really had it going on back then in the SuperCat class,” he recalls.

Crucial to Coil’s success was learning from a wide range of talented individuals, from Scott, Tomlinson, Bodenbach and Milas to folks like Peter Hledin of Skater Boats, John Cosker of Mystic Powerboats, Gary Stray at MTI, Randy Scism of MTI, Mike Thomas (Tomlinson’s partner at TNT Marine), Mike D’Anniballe of Sterling Engines, Chris Hanley (“a great fiberglass and carbon-fiber guy”) and many team members at Mercury Racing. “You meet all these people and you learn a little bit from all of them,” Coil says. “Then you can start to use their knowledge because they’ve opened your mind or different things.”

In 2008, the economy took a nosedive, and the team lost its major sponsor, Anheuser-Busch, when the company got sold. So the team focused on their service work at Nauti Marine, where their customers included owners of bass boats, as well as a few high-end customers like racer (and Anheuser-Busch heir) August Busch IV and his amazing array of go-fast machines. “For a little shop, we had a lot of cool boats there,” Coil says.

In 2014, Mark Waddington and Brett Manire, who had launched Performance Boat Center in Osage Beach, MO, the year before, needed some more skilled service people to join their team. Coil demurred, being loyal to Dave Scott, but then a deal was struck to buy out Nauti Marine—including the property, the assets and the employees. It was a giant step forward for Coil, who not only helped PBC grow its business, but rejuvenated his offshore racing career. “I think I started working here in December, and in February, Mark Waddington said, ‘Hey, what do you think about going racing again?’ I said, ‘Oh, that’d be cool!’ It had never been mentioned during the whole purchase. I was just going to be one of the service guys.”

Coil’s 2015 was a banner year: he not only launched his legendary stint racing the brand-new 388 Skater Performance Boat Center/Jimmy John’s (initially throttling with driver Lance Sutton), but winning the Top Gun award at the LOTO Shootout, driving Don Onken’s American Ethanol Mystic to 208 mph with Mystic owner John Cosker on the sticks.

With Coil driving the 388 Skater and Tomlinson on throttles—and with unending support from crew members Greg Hillmer, Dave McInytre and Craig Amptmeyer—the team would earn back-to-back World Championship titles in 2016 and 2017, along with three consecutive National titles. 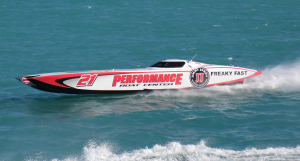 With MTI and Wright Performance in the mix, it was time to shake things up on the race course. First, the company had a new 42’ MTI catamaran (also called Performance Boat Center/Jimmy John’s) with crew chief Greg Hillmer for the 2019 season, racing OPA’s APBA Championship Series in Super Cat class and finishing the season in the third-place position.

Then, as if breaking in one new boat weren’t enough, Coil also spent the current season dialing in another new hull with crew chief Andy Sanders: the 32’ Wright Performance hull Performance Boat Center/Auto Alert, with rookie driver Rusty Williams (his PBC coworker) at the wheel and Coil and throttles. The first season out yielded impressive success for a new team in a new boat: winning the National Title in the APBA Championship Series.

After racing for a full year in “double duty” mode, Coil doesn’t regret doing it for a minute. “I never felt fatigued to the point of saying, ’This is stupid. Why do I do it?’ After the end of the race day, I could tell I was more tired, but during the race I never felt like I was jeopardizing how good I could do. Test days were probably the toughest, because you’re working out problems, and you keep hopping from one boat to the other six different times. But I’m a guy who lives and breathes boats, whether it’s a bass boat or one of the fastest boats in the world.”

Coil says he has relished the experience of being part of the Performance Boat Center team with Waddington and Manire. “It’s been an enormous thrill,” Coil says. “And now I’m also working closely with the Wright Performance crew as well, including Doug Wright Sr. and Doug Wright Jr. It’s really a dream come true.”

A couple of years ago, Speedboat Magazine invited Coil to join its test-team crew, so the last few rounds of boat tests have included valuable input from him and his co-pilot, Teague Custom Marine owner and fellow World Champion offshore racer Bob Teague.

“At first, it was very exotic going to Havasu,” Coil says. “I wasn’t used to going there, and I rarely get to run the West Coast-style boats at the Lake of the Ozarks. One of things that really made an impression on me was how professional Ray Lee and his crew were doing all of the prep work, like setting up the tent, and arranging for all of the boats to be ready at 6 a.m. There’s all this stuff that the readers of the magazine never see. You just look at photos of the boat and think, ‘How fast did it go?’ But we’re literally running boats from sunup until we just can’t go anymore. I really enjoy it.”

Coil gives an appreciative shout-out to Missi, his wife, the love of his life and his biggest fan. “She’s amazing for putting up with everything I do,” he says. Together, they have four kids: Preston, 11; Kennadie, 7; Jaxon, 5; and Camden, 1.

@tommygunimages capturing the magic of the Florida

Shout out to @svictor_photography for capturing a