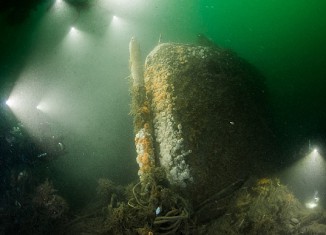 Over a century after it went missing, the German WWI U-boat SM U-31 has been discovered by an offshore wind farm development firm. Although widely believed to have either struck a mine and sunk, or been destroyed due to a gas leak, the u-boat has been found 55 miles off the coast of East Anglia. Energy companies Scottish Power and Vattenfall, which were carrying out seabed surveys in order to plan the construction of proposed offshore wind farms found the wreck and originally thought it was a lost Dutch WWII submarine. In better than expected condition, the u-boat still retains its conning tower and the bows are partially buried in the seabed.

Charlie Jordan, of Scottish Power Renewables, said, “Unraveling the whole story behind the submarine has been fascinating and it’s heartening to know that the discovery will provide closure to relatives and descendants of the submariners lost who may have always wondered what had happened to their loved ones.”