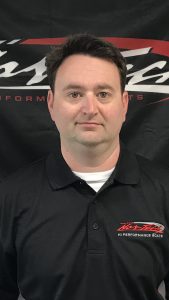 With over 100% growth in less than two years to say Nor-Tech is really busy building boats is super weak vocabulary.  Truth is Nor Tech is building boats, expanding, and improving their processes as they grow.   One big step forward was the recent hire of Geoff Tomlinson as the new dealer manager with the responsibility for direct support to the 10 U S Based dealers and 4 additional foreign market dealers.

Geoff brings a vast blended background from work in the automotive industry but has deep roots and lots of experience in the marine markets.  From our talks this last Monday at the factory you can rest assured to see some big this coming from Nor-Tech!

My name is Geoff Tomlinson, I am the recently hired Dealer Manager.  My role with Nor-Tech Hi Performance Boats will be to work closely with the dealers and Henrik in production to ensure sales and manufacturing are coordinated efficiently.  My overall goal is to increase the communication between the factory and you the dealers.   Below is a brief history of myself and connection(s) to the marine industry.

My passion for the boating industry began at a very early age by watching my father race tunnel hulls back in the early 80’s that later lead to his off shore racing days with APBA.  I was always eager to attend as many races as possible and learn as much as I could about every aspect of a boat.  Later on I worked for my father’s boat dealership, Eliminator Boats of Texas while earning my bachelor’s degree in Business / Economics from Texas Christian University in Fort Worth, TX.  After graduating from TCU I accepted a position at Fountain Powerboats in Washington, NC as Sales Administrator and quickly grew into many other roles including the International Sales Rep position.  In 2011 I made a switch to the auto industry with Sewell Automotive Industries / Lexus, working both for the manufacturer and a family owned network of dealerships I was responsible the area’s vehicle allocations, developing internet sales teams, and creating the new Technology Specialist role later to be launched nationally at all Lexus dealerships.   While I enjoyed working in the auto industry I was still connected to boating through various positions with the 2015 QMSF Qatar Cup, Offshore Powerboat Grand Prix (OPGP), and USF1 series. After a few email exchanges between Henrik and myself which lead to some phone calls with Henrik and Trond, I was later offered the role as Dealer Manager.

I look forward to meeting everyone and working with everyone.   If there are any questions or if there is ever anything that I can do to help please let me know.

FPC Raises $70K for Emerald Coast Charities; Next Up Is Key West