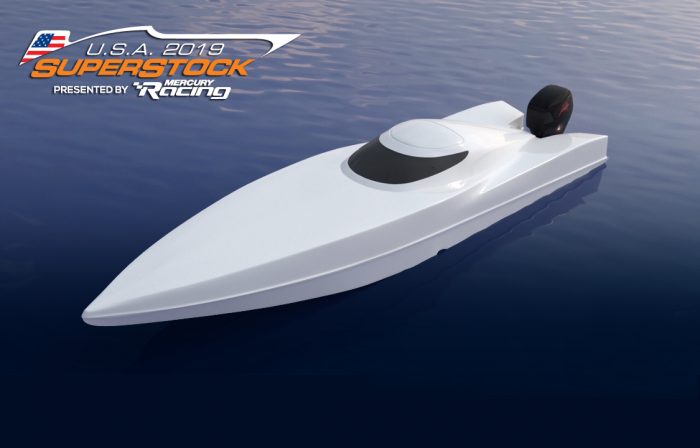 International marine motorsport promoter Powerboat P1 is embarking on a major program over the coming months to significantly upgrade its fleet of Panther race boats in the USA in preparation for the 2019 season. Launched in 2011, the monohull Panther powerboat is at the heart of the one-design P1 SuperStock race series.

Powerboat P1’s plans are to revolutionize the SuperStock championship and attract a new set of racers by converting to canopy race boats. After being fitted with new carbon hulls, the Panthers will be repowered for 2019 with the new Mercury Racing 4.6L V-8 four-stroke 300R outboard.

Powerboat P1 has raced in 18 countries on four continents since it was founded in 2002. In 2011, it moved to a new business model by designing and introducing the 28′ Panther to spearhead the creation of a one-design, single-engine series that is one of the most affordable, most accessible and most competitive forms of motorsport.

The hull replacement work on the P1 SuperStock USA fleet was carried out over last winter, with the new hulls being built with an advanced fusion system using a foam core and custom blend resins. The work was carried out in Florida by specialist boatbuilders Wilson Custom Composites, whose owner Craig Wilson has almost twenty years of racing experience. “The strengths we achieved along with almost 800 lbs. weight loss in the hull alone was unheard of, and we are now focused on fitting the boats with a closed canopy which will again involve the use of cutting edge technology and materials,” he says.

This major upgrade project has been part of Powerboat P1’s development planning for some time, as its Chief Executive Azam Rangoonwala explains: “We saw the move to the new 300R engine, with its anticipated improvement in overall performance including top speeds, as being  the optimum time to ramp up safety even further by converting to closed canopy craft. By partnering with world class companies our race series will benefit through innovation, outstanding technology and superb implementation, which in turn enhances the racing experience and sporting entertainment. The removal of the rear seats and cowling will transform the Panther from being a dual-purpose sport and leisure craft into a pure race boat. Improved safety and increased boat performance are what drives this program.”

Mercury Racing’s relationship with Powerboat P1 includes them being the presenting sponsor of the P1 SuperStock Championship, and in July, they announced that their all-new 300R V-8 four-stroke outboard will replace the legacy two-stroke 300XS as the exclusive power for both next year’s USA series and any international venues.

“They will experience a noticeable improvement in acceleration—particularly useful when powering out of turns—together with an improvement in top-end speeds,” Mackie says.

Mercury Racing Director of Marketing, Sales and Service Steve Miller adds: “It is exciting to have our consumer products used in this highly competitive, one-design racing environment. There is no better way to prove their performance and durability.”

Working closely with the key players on all aspects of the upgrade will be Martin Sanborn, who was one of the lead developers of the P1 and then took it to the next level through utilizing the resources of the Performance Boat Center in Florida. He makes clear that the move to the canopy configuration will have a number of important results including increased safety for the crews, improved race performance and  the change from a mechanical control system to a digital throttle and shift system which will increase responsiveness and simplify the rigging process for the boats.

Sanborn points out that the work to be carried out will be compliant with current UIM and APBA certification, and he is keen to highlight the safety and performance benefits that will result from the canopy system: “The canopy and cockpit will feature a carbon composite structure that is both light and exceptionally strong. Engineering, that will include a complex integration of a polycarbonate windscreen and receiver together with recessed carbon hatches, is targeted with aerodynamic, hydrodynamic and mechanical impact considerations to provide maximum protection to the racers. The boats will see another weight loss resulting in a lowering of the vertical centre of gravity and better handling.

“Powerboat P1 have leap-frogged the marine industry by having the most technically advanced full safety canopy system and interior available,” says Craig Wilson. “We will make the P1 Panther a racing work of art.”

Adds Rangoonwala: ”The combination of new power and sleek, new hulls will bring an extra dimension to the SuperStock series where the focus will be even more on boat setup and driver skill. I can’t wait for the green flag to drop.”