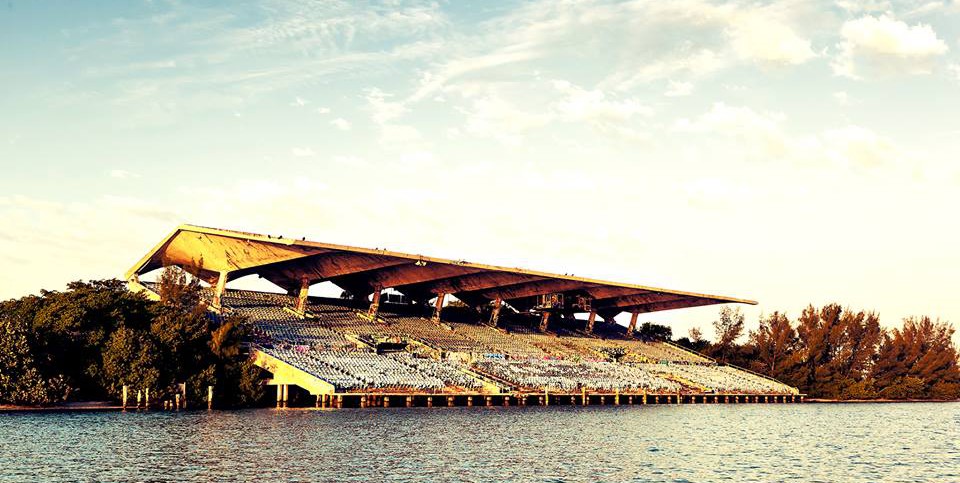 The Miami International Boat Show is moving. For the first time since 1969, the show will be in another location this year to celebrate its 75th anniversary. Although unwanted, the move was necessary since the show was not on the “protected event” list while the Miami Beach Convention Center undergoes the $500 million renovation. Expected to be finished in 2018, and most likely later if we are being realistic here.., there was no choice but to find another home for the massive event. The NMMA has made the decision to move the event to the Miami Marine Stadium Park & Basin which has been unused since Hurricane Andrew in 1992. With a $16 million to $20 million investment from the city for the infrastructure that covers electrical wiring to fresh asphalt, the NMMA has been giving the unique opportunity to redesign and restructure the entire event.

Everything will be new. Brand new. The most prominent creating being the new docks for boat lovers from around the entire world will congregate to get a look at the latest, high performance crafts on the market. This year there will be over 440 in-water boat displays with the available space to grow this number in future years. Organizer Cathy Rick-Joule has emphasized that a key feature of the added water space is that attendees will be able to browse engine and performance parts manufacturers booths and then step right onto the docks where they can see these engines and parts being implemented first hand. Another benefit of the move will be the expansion of event dedicated parking. While last year saw only 2,500 parking spots at best for attendees, this year there will be over 4,000 dedicated spots on Virginia Key alone. But not to worry, if you are leaving from Miami there are over 10,000 parking spaces in downtown that will be serviced by shuttle bus and water taxi so that you can make it to the event on time and with ease. All of these services and spaces are pre-issued to save you time and hassle.

Aside from boating itself and all of its related industries, the move this year will see a night and day improvement in the food and restaurant selection, normally the number one complained about issue in previous years. Specialty Restaurants Corporation, manager of the Rusty Pelican and Whiskey Joe’s, has been brought in by the event planners to rewrite the menu and create new dining and restaurant-quality options. After extensive research, managing Director Ryan Smith has come up with the plan to build multiple on-site 24 hour kitchens serving everything from wine and seafood in a lounge like setting, to barbecue and build-your-own pizza. Coupled with this sure-to-impress menu and service, SRC is building on-water dining with views that will sit 300-400 guests apiece.

But perhaps the most intriguing and fascinating aspect of the event taking place at Miami Marine Stadium Park & Basin is the nostalgia associated when looking at the massive stadium. There won’t be single person in attendance that won’t try to recall its past and re-imagine its future. Opened in 1963 as America’s first powerboat racing designated venue, its cantilevered upper section is still called a design marvel to this day. Considered to be the best place in the world to race a boat, its impressive design gives the audience the unique angle to see past the rooster tails and get right in on the action. Aside from boating events, the stadium has also held concerts and events for the likes of Queen, Steppenwolf, and even an appearance from Richard Nixon.

Unfortunately, after Hurricane Andrew, the stadium became an abandoned canvas for street art and the like. Now, while under siege by developers for its billion dollars views, conservationists are fighting for its restoration. After being added to the list of America’s 11 Most Endangered Historic Places, the stadium was added to the list of National Treasures in 2012. A grant from the Getty Foundation is providing the means for analyzing how to restore the concrete exterior and American Express provided $80,000 for the analysis of the underwater sea pilings. It has now become only a matter of time before it will see its former glory restored. It is truly the opportunity of a lifetime to be able to attend this year’s show and see the stadium in person, thronged with boat lovers as it was in its heyday.

Only one month away, we are looking forward to the show with anticipation for all that it entails, and we can’t wait to see you there!